I wasn't going to post again today, but my grief is such that I feel compelled to get it out of my system.

My dog, Chelly died at one o'clock this morning.

That little girl and I were so much alike. We were afraid of things that went bump in the night, but fearless when confronted with battle. She had boundless energy too. In our prime we would run and no one could catch us. We were a team, and a force to be reckoned with.

She was typical for an Australian Shepherd, as close to me as my shadow, constantly looking back at me for reassurance. She was on a one-dog mission to bring order to the world. And in turn, my girl brought order to my world.

I've raised dogs for well over three decades. I even spent a few years as a surgical assistant to a vet. So you would think I'd accept death with a fair amount of grace.

As she lay dying, I was angry. Angry at God, angry at fate, angry at myself for not being able to stop the inevitable.

Chelly lost her hearing last year, and her sight had been diminishing steadily. But she seemed to recognize my smell and my touch. So I lay down next to her, knowing she couldn't hear my soft words of reassurance, knowing she couldn't see me anymore. I stayed with her until she breathed her last, and then I broke down. My job was done. I could cry now.

There is an old American Indian legend that speaks of dogs' loyalty to man.

"In ancient times, when man and animals communicated as equals, a crack in the earth erupted. Man was on one side and the animals were on the other. The crevice grew wider and wider separating them and just before it became too large to traverse, the dog alone jumped over the chasm so that he could stay with man."

That was my Chelly. And now she's gone. 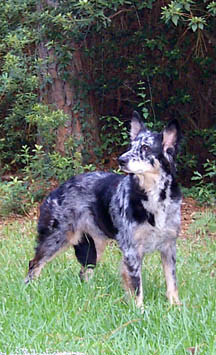