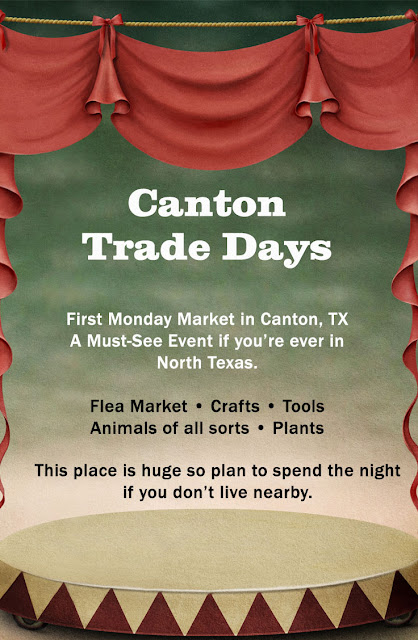 We finally made it to Trade Days in Canton, TX. If you've never been to a Trade Days event in your area, you've got to try it at least once. 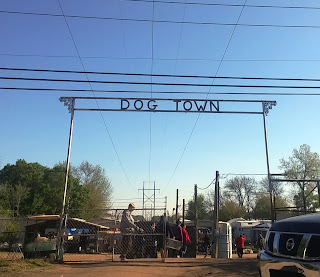 Canton Trade Days, or First Monday as it's called locally,
covers over a hundred acres. It's so vast it spans several locations. You could walk from one to another if you were 20 years old and on a sugar high, but I wouldn't recommend it.

Trade Days is divided by pavilions that cover crafts, antiques, general flea market stuff, animals, and junk. Occasionally we hit the antique and craft pavilions but since it takes all day, we'd rather spend the day on the animal grounds. The old timers used to call it Dog Alley, but the sign reads, Dog Town.

They sell a lot of dogs there, something I try to avoid since it breaks my heart to see them peddled like that. I go mainly for the livestock and farm/garden equipment.

This month, I was on a mission to find a piglet, a blue New Zealand rabbit, or some quail. The quail were too expensive and there were no rabbits that interested me, but there were a couple of vendors with piglets. I almost bought one but he was too big for the crate I had brought. I was hoping for much younger piglets.


We left empty-handed, but we did get to see a fire juggler
on a unicycle. 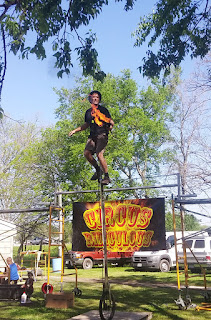 I also had a nice chat with a lady about my egg-sucking chickens. She was willing to do a trade with me, but I didn't want the breed of chickens she had on hand. Had it not been so far to travel, I might've traded her for something else since she didn't seem put off that my chickens ate their eggs.

Dog Town is a mish mash of old country farmers and newbies trying to unload their stock. Like all flea markets you have to go in with a wary eye. I hate to see the animals cooped up in such small pens and cages, but that's the flea market trade. All you can hope is that they'll be sold before too long.


After Canton, we hit a few garage sales on the way home. We hit some sweet deals mostly because it was late and people just wanted their stuff gone. One garage sale had already closed and they had put all their unsold stuff on the curb.

We came home with a nice Oriental rug (similar to the one the dogs had destroyed), a big clay pot (I can never have too many pots), and a small dog carrier. I collect dog kennels. A couple I keep for myself for when I want to transport livestock, but we always pick up extras when we can and donate them to local shelters.

In all, it was a great day. The weather was beautiful and we got to drive down some gorgeous countryside. We needed the break after the week we'd had. Two more weeks of running around and then I can tell you why I've been so frazzled.

It's a great place for inspiration if you're an author or artist. I'd go for the cast of characters alone. You meet all kinds of people in Canton.

betty said…
I have not been to a flea market like this with animals available to sell, but mainly just household items, clothing, that sort of thing. It would be interesting to see though!

I think that is neat how you collect dog carriers and then donate what you don't need to the animal shelters. I am sure it always very much appreciated!

Sounded like a good time for you and your hubby!

I love browsing flea markets, but I rarely buy anything. I just love finding unique things and talking to the vendors. There's always a story behind their treasures.
April 11, 2016 at 4:37 AM

Michael Keyton said…
Ah, the joys of retirement. :) I'm surprised the pig vendor wasn't savvy enough to have a crate to sell with the pig. How had he brought it along? Your whole description is reminiscent of the souk in Marrakesh but less exotic and no camels. In Monmouth we just have charity shops
April 11, 2016 at 4:40 AM

Stacy McKitrick said…
I've been to Canton, Ohio. Does that count? Haha!

Maria Zannini said…
Mike: He had a trailer full of pigs. One of the vendors was willing to deliver since he was relatively close to us but he also had the more expensive pigs.

Maria Zannini said…
Stacy: Only if Canton, OH has a flea market too.

Angela Brown said…
I haven't been to Canton but that certainly sounds like an interesting place.

I'mean not the best when it comes to hunting for a good bargain. Probably something I really need to work on :-)

Madeline Mora-Summonte said…
I tend to like the craft fairs more than flea markets and garage sales, but I'll go to them, too, depending on how big they are, if I think they'll have good stuff, etc. Most recently, we bought some purple dishes - our dishes started getting cracks in them and were unusable. These new ones go pretty well with what we have. We don't care so much about having a true set. :)
April 11, 2016 at 5:40 AM

JackieBCentralTexas said…
I would have loved to gone back to Canton at least once, like you Dog Town is heartbreaking to see them in small enclosures but at the same time also very intriguing with it's different animals to look at and maybe acquire.


We have something similar in Round Top and Warrenton which are only an hour or so away rather than a full days travel from us. Not to say that it is as big as Trade Days but while Canton is confined mostly to the site the ones here are the whole township wide with not only people setting up in the designated fields but the businesses get in on it too.
April 11, 2016 at 8:03 AM

Susan Gourley said…
I haven't been to big flea market in years. There is one that meets weekly not far from us but it doesn't have animals.

Jenny Schwartz said…
Sounds like an exhausting fun day! I've noticed the local markets like these around here are becoming a bit more upmarket ... I remember when they were down to earth and friendly, not pretentious. *sigh* Yours sounds great!
April 11, 2016 at 12:38 PM

Maria Zannini said…
Madeline: For years I lived with a non matching set of dishes and then one day I decided to splurge and buy a real set. I kind of miss my mismatched dishes but at least now they all nest together well.
April 11, 2016 at 1:05 PM

Maria Zannini said…
Susan: I love the ones set in older neighborhoods and towns. There's so much history in the stuff they sell.
April 11, 2016 at 1:07 PM

Maria Zannini said…
Jenny: Yeah, a lot of the flea markets are catering to the millennials. The stuff is overpriced and trendy rather than unique.

Canton is memorable for being unconventional and its colorful characters.
April 11, 2016 at 1:12 PM

My nephew and his wife live in Dallas...posted photos of the hail that hit them yesterday...golfball sized. Ouch. Hope yall missed out on that
April 12, 2016 at 2:01 AM

Maria Zannini said…
Mac: That hail was massive! Thank goodness it missed us. Further north of Dallas the hail were as big as softballs. I'd never seen them that big.
April 12, 2016 at 2:23 AM

Lynn said…
I've never made it to Canton, but I've wandered all around the rest of the state. We go to our local flea market about once a month, mainly so I can walk and take pictures. I have a standing no-more-junk policy, so we rarely buy anything except boiled peanuts for the daughter. :) It's fun to people watch; there are always some incredible characters. As it happens pics from my visit last weekend will be up on my blog tomorrow.

One lady at ours runs a puppy store, and I fell in love with a couple of German Shepherd pups she had this weekend. I can't handle any more dogs, though, so I just sighed over them.
April 12, 2016 at 5:51 AM

Maria Zannini said…
Lynn: You must come visit me if you're ever close by. I'm about an hour east of Dallas.

re: dogs
I've learned to stay away from the dog peddlers, though I will admit the love of my life came from a place like this.

Some kid was grabbing her roughly and terrifying her. I don't know what got into me, but I snatched the puppy from his hands and told the seller I was buying her.

Maria Zannini said…
Emily: Not to my knowledge. There's a sign at each gate saying no outside dogs are allowed.

Kristi said…
Dog alley is disgusting and should be shut down. They should be boycotted
December 2, 2016 at 4:02 PM

Maria Zannini said…
Kristi: They're not doing anything differently than how farmers had done business for centuries. Besides, there is a permanent veterinarian on site.
December 3, 2016 at 1:00 AM

Linda Bertini said…
Do they sell kitties? I'm looking for a white Himalayan kitten with silver paws, tail and ears
February 3, 2017 at 5:16 PM

Maria Zannini said…
Linda: They do, but the variety looks limited to me. They usually post signs out front telling you what breeds they have.
February 4, 2017 at 12:54 AM

6 Tips For Handling Big Events - Maria Zannini said…
[…] a rule I avoid crowds and big venues but I make an exception for Canton Trade Days and the State Fair of Texas. Usually I go prepared for large events, but I flubbed this time and […]
October 24, 2018 at 2:43 AM