British Farms Through the Ages: A Documentary Series 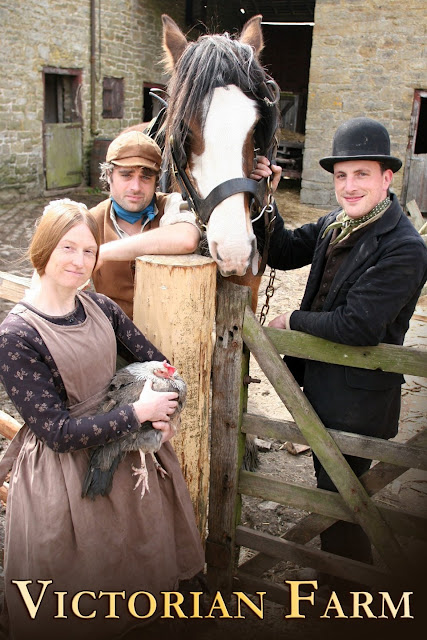 We've been binge watching a fascinating series about English farms throughout history. They're historical reenactments where Ruth Goodman (historian), Alex Langlands and Peter Ginn (archeologists) live a year in as close an era based farm as possible. Tom Pinfold appears in Tudor Farm.

I tried looking for these videos on Netflix and Amazon, but the dvds aren't available for the US region, so we started streaming them from YouTube. There is a book on Victorian Farm though.

I found the videos accidentally when I was looking up something on homesteading. From the moment I met Ruth, Alex, and Peter (and sometimes Tom) I was hooked. It was like meeting up with the quirky members of your family. FYI: We're the quirky members in our families.

We went backwards in time, starting with Wartime Farm and ending up with Tudor Farm. We haven't yet watched Secrets of the Castle.

First our favorites: Greg loved Wartime Farm because of Henry, the border collie. He was my favorite too, but I found Wartime Farm a grim venture. I have to hand it to the Brits of that generation. They were a tough lot. I'm not sure we'd be quite so stiff upper lipped if the US had been bombed as much as Britain was.

Henry, the dog, was a hoot. At one point we were worried they were going to get rid of him because the English had culled nearly all their livestock so they could produce wheat. They used to import it from the America but shipments were often sunk to the bottom of the sea by the Germans. Now the English had to fend for themselves. With no livestock, they didn't really need Henry. Luckily this was a reenactment. Henry kept his job as chief cute dog.

Greg is a WWII expert so we were constantly pausing the video so he could tell me what else was going on during that time period. But living in England at that time was grim, truly a hard-scrabble life. One of my dearest friends grew up during WWII in England. She would tell me stories about how they had to climb rubble and occasionally a dead body on her way to school.

Every year the war lasted, the more they were asked to sacrifice. The government asked more than they should have in my opinion, going so far as throwing people off their farms if they had a bad year.

My personal favorite was Victorian Farm. Daily life was hard, but it was also rewarding. Unlike Edwardian Farm, Victorian Farm relied solely on horsepower and occasionally steam power. Smelly, loud petrol engines didn't come into use until the Edwardian era. For the most part they hadn't quite worked the kinks out of the equipment so it seemed more trouble than it was worth.

What I liked about Victorian Farm was that people had real skills. I learned all about straw plaiting, how to make a wood barrel, and how a wheel was made--all things I never knew. People were quite clever in solving everyday problems. I guess it could be said that each generation solves its problems for their time, but I was doubly impressed by the Victorians. Resourceful, elegant, and clever. Below is the first episode of Victorian Farm.

In all the series are as follows:

Edwardian Farm: Farming during the reign of King Edward VII

Victorian Farm: Farming in England during the 1880s

Tudor Manor Farm: Farming in England during the reign of Henry VII

Secrets of the Castle: Building a castle using medieval techniques at Guédelon Castle in France

The three presenters were charming. Ruth is always laughing and Peter is the clown of the group. I was touched with how much he loved his pigs in Victorian Farm.

If you're into history, homesteading, or an Anglophile (or an author writing about any of these periods) you will love this series. I thought I had a good grasp on how to do things without the basic comforts of modern life, but I was wrong. The series was truly eye-opening.

Give it a try.

Have you heard of this series or these presenters? Can you recommend any other historical documentaries?

This post may contain affiliate links. Clicking on these links cost you nothing, but they do help support this site. For more information, please see my disclosure policy. Thank you for supporting MariaZanniniHome. I appreciate you!

Mike Keyton said…
Yes, I enjoyed it too. Thought of you and Greg several times. Just waiting for a Texan reality programme. I'll contact Ruth and co. Henry, too, of course
June 8, 2016 at 2:19 AM

betty said…
I hadn't heard of this series, but it does sound fascinating.

Susan Gourley said…
It all sounds very interesting. My father often spoke of growing up and farming with horses. They couldn't afford tractors and didn't have electricity in their house until he was a teenager. He refused to have horses on our farm even though we wanted them.
June 8, 2016 at 4:01 AM

Maria Zannini said…
Mike: They were great! I had started watching a video on An American Homestead but it was terribly dull and dry. They needed a Ruth, Peter, and Henry. :)
June 8, 2016 at 4:46 AM

Maria Zannini said…
Betty: It was like watching the History Channel but with better presenters.
June 8, 2016 at 4:47 AM

Maria Zannini said…
Sounds like he was glad to put that behind him. My neighbor farmed with mules. He even went to school on a mule. It's a tough life that's for sure, but if that's all you have you take it.
June 8, 2016 at 4:48 AM

Maria Zannini said…
Thanks, Jenny. I'm putting it on my list.

Maria Zannini said…
Marci: I'm glad it was something you'd like. I have a feeling I'll be rewatching this again before too long. They were really interesting.

Could You Cull a Pet | Maria Zannini said…
[…] found this article from the BBC News shocking and painful. I had mentioned in an earlier post about British Farms that during WWII much of their livestock was culled because they couldn’t afford to feed such […]
August 24, 2016 at 2:02 AM

Pioneer Quest: Reality vs Reality Show | Maria Zannini said…
[…] If you’re interested in 19th century living, it’s got some interesting aspects to glean. For a better perspective, I’d recommend the British productions of Victorian Farm or Edwardian Farm that I mentioned in this post. […]
October 31, 2016 at 4:45 PM