I watched a couple of little kids climbing the apple bin at a grocery store once. Their little hands had touched everything from snotty noses to picking stuff off the floor. A few seconds later, an old man had picked through the same apples. Someone else waited patiently until it was his turn to fondle the fruits.

In the end, I decided not to get apples that day.

Much to Greg's annoyance, I wash EVERYTHING, even if it's from my garden. Granted no human hands, other than mine ever touch the produce from my garden, but you can't stop bugs or birds from landing on them. Not to mention, my new enemy, the deer. 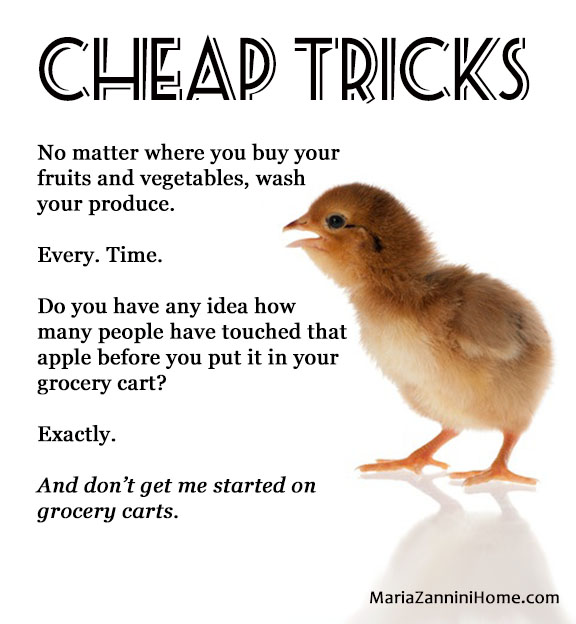 Greg thinks I'm being overly cautious, but I say better safe than sorry. I even wipe the tops of any can I open.

Maria Zannini said…
Dru: It's a minor inconvenience when you don't know what's touched the things you're about to eat.

Mike Keyton said…
I'm pretty finicky, and always wash my hands on coming home from anywhere ref trolleys and buses etc. I have to suspend my finicky tendencies in restaurants, which is hard because I know what goes on in kitchens. A new experience is the gym where you are exhorted to wipe down each piece of equipment you use
September 23, 2016 at 2:46 AM

Maria Zannini said…
Mike: Ever since that H1N1, I've been fastidious about keeping my hands clean.

Marlene Dotterer said…
I wash. No matter where I've been, the first thing I do when I come home is to wash my hands. Soap and hot water. I wash the fruit and veggies with a brush and water, some get soap as well. I'm especially careful about it because I rarely peel anything. So much of the nutrients and fiber are in the peel. True, my scrubbing may rub most of the peel off anyway, but for sure, it gets the dirt. Now, it doesn't bother me to buy an apple I dropped on the floor at the store, or that I saw kids picking through. I'm going to wash the hell out of that thing anyway. Like you said, you have to assume your food's been through the worst while you weren't looking. So clean it. And remember that a few germs getting into our bodies help to keep our immune systems strong. Just don't be careless about it.
September 23, 2016 at 3:54 AM

Mason Canyon said…
In this day and age, it's sad but you can't be too careful. Taking away all the people that handle the produce in the stores, just think about where the produce was before it got to the store and how it may or may not be handled to get there. I'm a can washer too. :)

Maria Zannini said…
Marlene: You bring up a good point about having some bacteria in our lives. Today, kids seem to get sick from the least little things. Of course there are super bugs now too. It's a delicate balancing act.
September 23, 2016 at 4:18 AM

Maria Zannini said…
Mason: That's right! I hadn't even thought about the processing even before it gets to the store. There's no telling how many people were involved before you touch your food.
September 23, 2016 at 4:19 AM

Stacy McKitrick said…
I got so disgusted with dirty cans, I don't drink out of them anymore (plus I just don't like the taste of soda that's been in one).
September 23, 2016 at 5:54 AM

LD Masterson said…
I wash. Faithfully. Well, most of the time. Usually. If I have time. And I think of it. Oh, hell, half the time I just rub the apple against the leg of my jeans (which are probably not too clean either) and go.

Maria Zannini said…
Linda: LOL! I'm going to have to remember that line.