Labyrinthitis and Vestibular Neuritis in the Stubborn Patient 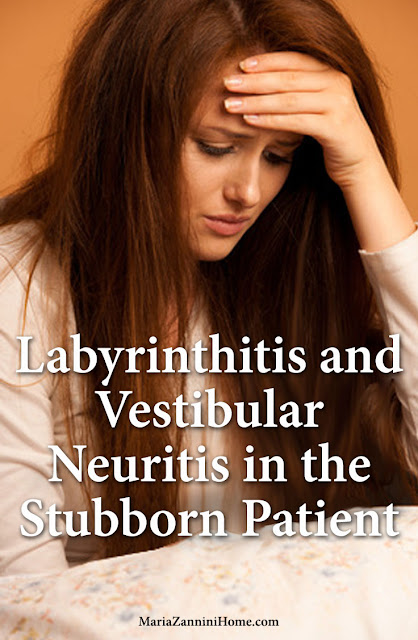 I've been unwell for several months brought on by sudden attacks of dizziness. At first, I thought it was a sinus headache because sometimes a change in barometric pressure can make me lose my balance. It would come and go. I'd no sooner think it was over when it would come back. Once I'd lost my equilibrium I'd wallow in an abyss of annoyance because that meant my work was piling up. I felt useless and unwell. There's no other way to describe it.

I mentioned it to my friend, and she put me on a Facebook chat with her sisters, both medical professionals, one a doctor in Brazil. I didn't think it would do much good, but I agreed and received a long distance diagnosis of Labyrinthitis. I was told to give up caffeine and sugar which I promptly did because the flare ups were so severe I was nearly bedridden.

Fast forward, things got better, but not great. The onset of the dizziness was rapid and unpredictable. If I looked up too high or turned my head at the wrong tilt, I'd start walking to the left. The worst was at bedtime because the room would spin if I tried to lay on my left side.

I never knew when it would flare up. I became paranoid about moving too suddenly, fearful the room would start spinning.

As usual, I put off going to the doctor, but last week enough was enough. My left ear was still tender and warm even after months. I knew it had to be some sort of infection. I had tried high doses of anti-inflammatory drugs and that seemed to help for a while, but that in turn created holes in my stomach lining which made me feel worse. That's what finally made me go and see the doctor.

Guess what? She immediately diagnosed Labyrinthitis. She put me on steroids and antibiotics. For the first time in months I finally had a good night's sleep. I can't say I'm cured because my ear is still tender but the spinning room is under control. Chances are the infection is viral and not bacterial, which means only the steroids are helping me at this point.

Unfortunately, I waited too long to see a doctor and there's a chance I might've caused permanent nerve damage to that ear. I'll have to cross that road when I get to it.

The moral of this story. Next time, go to the doctor.

Are you a good about seeing the doc when you're ill, or do you wait until you're at death's door?

Marianne said…
I get those ear infections every few years... they SUCK. I'm dizzy, nauseated to the point I literally can not stand. I have to crawl, slowly, to the bathroom in order to vomit. TMI?

I know, now, that as soon as I start feeling that particular kind of dizziness, I head to the doc. A solid round of meds can usually kick it before it gets so extreme. I've had it happen (the extreme version) three times since I've been married. It's miserable.

Re: going to the doctor ... I wait, mostly. I did learn the hard way, however, about waiting *too* long, via my father. He thought he'd pulled a muscle in his back and waited more than two months before he saw a doctor. Turns out it was cancer, and by then was too far along to do anything about.

There's a balance between heading to the doc at the slightest sniffle and being so stubborn you have something really horrible as a result. I hope your ear recovers fully!
September 14, 2016 at 2:08 AM

Maria Zannini said…
Marianne: If that isn't a sobering reminder to see a doctor, I don't know what is.

We had a similar event with my dad. He complained about his back but refused to see a doctor. We think now he must've known it was cancer.

Mike Keyton said…
A sobering story, Maria. The problem is you're not immortal, though thinking you are is entirely healthy. Take care, and good luck with the ear
September 14, 2016 at 2:28 AM

Maria Zannini said…
Mike: There are so many people who are seriously ill or need care. I just never think I'm one of them. LOL.

At least I can get back to work again without the constant interruption of spinning rooms.
September 14, 2016 at 3:06 AM

Madeline Mora-Summonte said…
Glad to hear you're doing better and are on the mend!

I always go to the doctor once a year for my physical, but otherwise, I don't go unless I absolutely think I have to. I'll do everything I can to figure out what's wrong, look for more natural remedies etc. If nothing gets better or works then off I go.

betty said…
Good that you did get in to the doctor and got some meds and are already feeling a bit better. I'm one to put off going to the doctor, but then I haven't had any real need to go for a bit.

Hope you continue to feel better bit by bit.

Sandra Ulbrich Almazan said…
I have hypothyroidism, so I go to the doctor twice a year to monitor my thyroid levels. On the other hand, I endured a sore throat for several days before realizing it might be strep (which it was).
September 14, 2016 at 3:49 AM

Mason Canyon said…
Hope your ear gets better soon and there's no permanent damage. I have dizzy spells from time to time and blame it on my sinus issues. I know now to pay closer attention if the dizziness persists.

Maria Zannini said…
Madeline: I was trying to hold out until my annual physical next month, but I just couldn't take it anymore. I was pretty miserable. But I'm like you, I try to find more natural remedies before I try the big guns.
September 14, 2016 at 4:18 AM

Maria Zannini said…
Mason: Please do. I kept blaming mine on sinus when it was really something more serious.
September 14, 2016 at 4:51 AM

JackieBCentralTexas said…
Thank goodness for a proper diagnosis Maria and that now you are on traditional prescription medication you are feeling better and on the road to recovery.

Maria my husband has done the same thing and due to his waiting too long a few years back he had to have surgery to repair his right eardrum because he was too stubborn when it first started hurting to go to the doctor.

Luckily this past week when he had an earache he only put it off a couple days and then he saw the doc for 10 days of antibiotics and 3 days of Prednisone. After one dose of steroid and 2nd dose of antibiotic his jaw stopped hurting when he ate and his ear pain/inflammation was manageable as well.

Personally am not the type to go to the doctor either, yearly exams and prescription refills used to be my medical care regimen. Now every year 3-6 month checkup with my Neurologist and MRI's yearly are added to that.

However luckily my overall health stays constant and am the only one in the house who seems to sidestep catching colds, getting flu or even stomach viruses. Would like it to stay that way but we will see if my immune system stays strong as it has been my whole life.
September 14, 2016 at 5:22 AM

Gwen gardner said…
I'm glad you're feeling better, Maria. Dizziness sure can put a damper on things, besides being quite scary. I'm dealing with vertigo. Again. Last time they had me on steroids and it helped. This time they say there is no proof that steroids work and they have me doing special exercises. We'll see.
September 14, 2016 at 6:01 AM

Maria Zannini said…
Mike: I wasn't going to go there. :D But this past episode did remind me of an experience from my misspent youth.
September 14, 2016 at 6:36 AM

Maria Zannini said…
Jackie: I got relief within 24 hours after the Prednisone. That's when I want to kick myself for not doing this earlier. I could've saved myself many months of sleepless nights and wasted days.
September 14, 2016 at 6:50 AM

Maria Zannini said…
Gwen: I read about those exercises. If they don't help, go back to that doctor and insist on the steroids.

What proof do they have that steroids don't work if it helped you last time? That makes no sense--and now I'm right back to mistrusting doctors. Oy.
September 14, 2016 at 6:52 AM

Susan Gourley said…
That sounds terrible. My sister-in-law had something like that and now though her dizziness has passed, she has some hearing loss. I hope you keep getting better. I'm pretty good at going to the doctor and have actually started having annual checkups for the first time in my life.
September 14, 2016 at 12:26 PM

Jenny Schwartz said…
Maria, that sounds awful. Sometimes being a trooper just isn't worth it. Glad you got help - although I put off going to the doctor, too (they're busy helping "sick" people and don't need to see me LOL)
September 14, 2016 at 12:32 PM

Stacy McKitrick said…
Hubby goes to doctor for every unusual thing. Good thing, too. They caught his cancer early enough to remove it! Me... I don't necessarily wait until I'm at death's door, but I will wait a day or so to see if I get better on my own. Or, I wait until Hubby tells me to go. :)

Glad you're feeling better now. But I honestly believe I would have seen the doctor WAY sooner than you had. If I'm miserable, I don't let it go that long.
September 14, 2016 at 12:47 PM

Maria Zannini said…
Susan:
re: My sister-in-law had something like that ...

Angela Brown said…
Oh the stubborn patient... can't admonish you when I'm not so good at going to the doctor right way myself. Now, for my kiddo, things are a little different lol!
September 14, 2016 at 1:44 PM

Maria Zannini said…
Angela: Honest, mom. I thought I would get better on my own. :D

Anne Gallagher said…
Sorry you've been so miserable. I know what it's like when you feel like that. Hope you feel better soon.
September 16, 2016 at 6:02 AM

LD Masterson said…
Better to go to the doctor and fine out it was nothing serious than not go and let something serious get out of hand.
September 16, 2016 at 6:40 AM

Maria Zannini said…
Anne: Thanks, Anne. I think I did some permanent damage but I'll have the doc take another look once I finish this round of meds.
September 16, 2016 at 10:27 AM

Maria Zannini said…
Linda: I plead 'not wanting to be a bother', or worse someone thinking I'm a hypochondriac. It was stupid though. I admit it.
September 16, 2016 at 10:28 AM