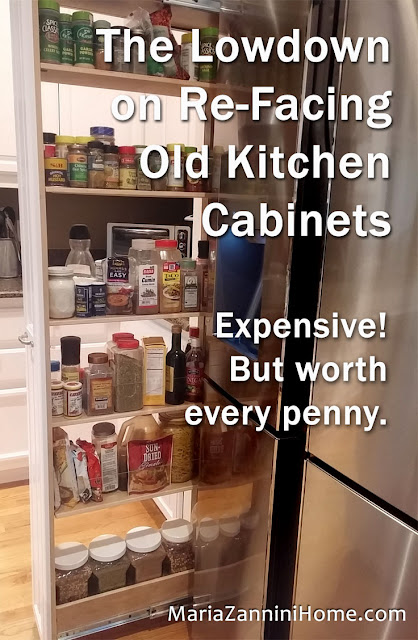 When we bought this house eight years ago, the most impressive part was definitely the kitchen. It was huge with cabinets from top to bottom. Like any house though, it was designed with the original homeowner in mind.

I'm convinced they must've been giants. The microwave was set up high, which to a short person could be dangerous if you're pulling out hot liquids.

When we finally committed to having the cabinets refaced (as opposed to replaced) I asked for some modifications. The first on the list was moving a nice wide drawer that was in the wrong place. Originally, it was below the inset wine rack, which I hated. It was impossible to clean the wine rack even with my little hands.

Also, when we realized we'd have a big hole after replacing the old Sub Zero fridge, we knew we'd need to hide that space, but it was beyond the contractual obligation of the carpenter so Greg built me a pull-out drawer in that long narrow space. He did this twice, but I'll explain why in a later post.

I keep my most used items in the pull-out: spices, vinegars, some pastas, and sprouting seeds. Of all the changes in the kitchen this is definitely my favorite.

I had thought about cabinet refacing for a long time but no one would give me a ballpark figure. They were very willing to send out a salesman though and do an estimate. To me that meant big $$$, so I resisted.

One day, we decided to hear them out. Home Depot had the best reviews of everyone I researched. The salesman came out, did his rough measurement, showed us samples and then flattened us with the estimate.  Too high, I told him. He adjusted some stuff and gave me another figure. Still too high, but Greg cautioned me that what they were going to do was beyond his grasp because of the materials involved. The cabinets have a hardened finish that we could never duplicate.

According to the salesman, they would send out a team that would remove the cabinet doors and drawers, sand the face frames down to bare wood, repair any defects, then resurface the frames, and install completely new drawers and doors.

After his explanation I could see why it was as expensive as it was. I certainly wouldn't do it for less. Moreover, the husband and wife team that did the work went above and beyond.

They fixed things that were not in the contract, like giving me an additional cabinet where the microwave stood, and fixed the water-damaged interior of a cabinet under the sink. They worked very long hours for five and a half straight days. Some of the doors were damaged in shipping so they had to come back (last week) to finish the job.

I'm difficult to please, and I won't deny it, but Home Depot impressed me from start to finish. I will tell you the price, only because when I did my research, I couldn't find a base line anywhere. Had I known beforehand I might not have gone through with it. After seeing the results, I'm glad I did. It looks like a brand new kitchen. What am I saying? It is a brand new kitchen, good enough for a magazine spread.

We got free financing for 2 years if we paid it in full. The final price was $30,000 (rounded up). Mine is considered a very large kitchen, with nearly 70 square feet of cabinets. The carpenter told me that smaller kitchens run between 10-15k.

Before, every cabinet was stuffed to the seams. Now I actually have EMPTY cabinet space because Greg added the tall pull-out drawer, and removed the wine rack and the microwave. This gave me room for two more full cabinets.

It's rare when I ask for anything major like this, but I think it'll be a good investment in the long run. I'm especially happy with the pull-out drawer. I'll do a post on how Greg did ours in case you ever want to try this at your home. It's such a great way to use an otherwise useless space.

Now on to refinishing the floor. That'll have to wait for a few days. I have a sick husband at home. He's running a fever so it's soup and tea for a while.

UPDATE: One year and one month later and it's paid in full! It still looks as beautiful as the first day. 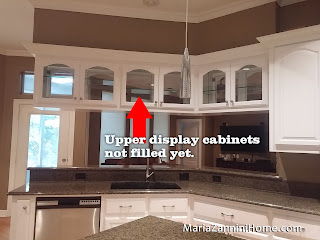 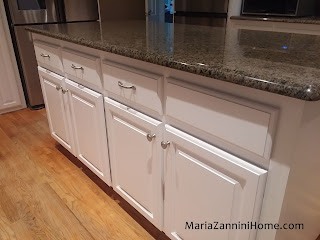 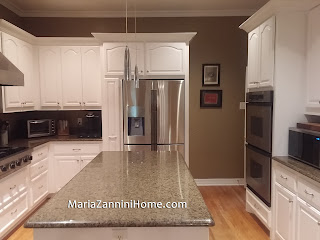 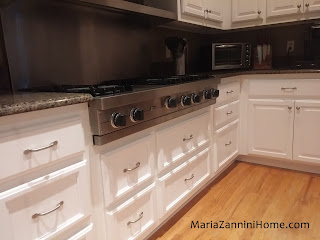 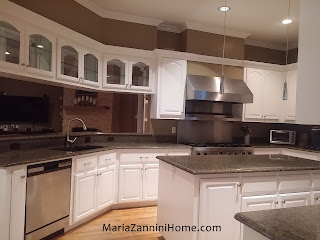 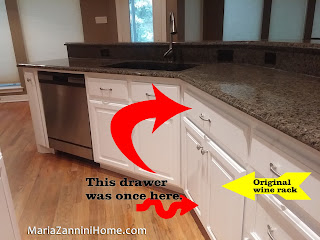 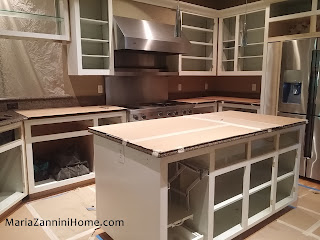 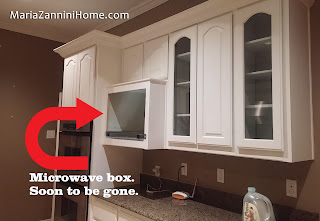 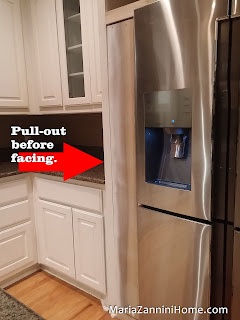 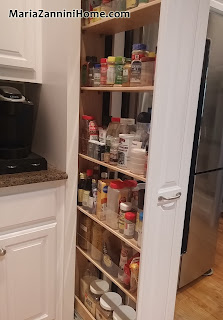 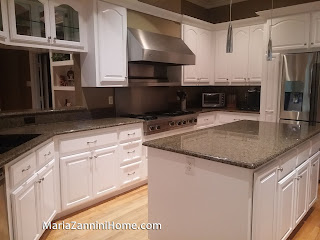 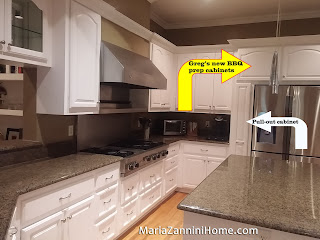 JackieBCentralTexas said…
Huge undertaking and totally jaw dropping investment cost but for sure a beautiful end result Maria, well worth the headaches of renovation.

Hopefully Greg gets well soon, hate that he started this nice change in the weather sick.
November 7, 2016 at 1:29 AM

Lynn said…
What a gorgeous job they did. Every cook who reads this post is turning green with envy, like me. :) Tell Greg to feel better soon!
November 7, 2016 at 1:35 AM

LD Masterson said…
Wow, your kitchen looks awesome. Worth every penny (even though those were a lot of pennies). I love the pullout by the fridge. I might have enough space for one of those; unfortunately, my hubby's talents don't run in the direction of handyman or carpentry.
November 7, 2016 at 1:45 AM

Madeline Mora-Summonte said…
It looks lovely! And from what I understand (mostly from home improvement/house hunting TV shows!), remodeling kitchens and bathrooms are best for investment purposes.

Maria Zannini said…
Jackie: We'd been hemming and hawing on this for three years. If we had done it then it would've been paid for by now. LOL!

Maria Zannini said…
Lynn: Even without the renovation, this is the best kitchen I've ever had. The original owners had good design sense.

Maria Zannini said…
Linda: It is a lot of pennies, but we don't have any debts, and we live simply, so it's like making a car payment.

re: pull-out
There were a couple of ways to go about it. Greg chose the more engineered way, so it's immensely strong.
November 7, 2016 at 2:23 AM

Maria Zannini said…
Madeline: Thanks! Eventually, this place will be too much for us so I want to update it while I can and enjoy the updates for myself before I sell. :)
November 7, 2016 at 2:25 AM

Susan Gourley said…
That job is on our list sometime within the next two years. We're still reeling from the estimates we were given to have some work done on our pool next spring. Our kitchen is much smaller than yours but I'm expecting some sticker shock.
November 7, 2016 at 3:00 AM

It was sticker shock, but when I saw how much work they did, I can see why. I think it was three days before they were ready to put down the first bit of facing. They worked ALL day too, mostly 12 hour days. The carpenter we got was exceptionally meticulous, which is good because I'm exceptionally hard to please.
November 7, 2016 at 3:17 AM

Marlene Dotterer said…
Are there pictures? I don't see any, and I'd really like to!

We paid about the same for our kitchen refacing several years ago. I still love it, so I know it was a good thing to do. We still need to replace the counters, but we probably never will. I hate tiles with grout - nothing but germ composts - but I hate the idea of throwing out good tile. I feel strongly about not adding to the world's waste problem, so I'm okay with maybe just removing the old grout and putting in new. That NEEDS to be done because some of the grout has crumbled away in places, leaving gaping holes in the counter. I will certainly ask for a different color - maybe a grout that more closely matches the counter color. I don't like that color, but it is what it is.

We will probably have to replace our built-in stovetop in the next few years because it's beginning to break on a regular basis. When that happens, I know we won't find anything the exact same size, so some counter work may have to be done at that time.

If we do take out the old counter, does anyone have suggestions for reusing the old tiles?
November 7, 2016 at 4:13 AM

Maria Zannini said…
Marlene: Oh, I'm sorry you can't see the pictures! Try a different browser like Firefox or Chrome. It's a series of photos with before and after shots.

Re: counter
I replaced our Corian counters with granite. I really like the feel of granite. We still have the Corian counters though. Greg's thinking of reusing them for an outdoor kitchen.

re: tile
Especially for resale, I strongly suggest replacing the tile. I've never liked grout. As you know, it's a breeding ground for bacteria.

re: Uses for old tile
If I had a lot of old reusable tile, I'd break them up to use as mosaic pieces for a fountain or table.

Another idea if you have good salvageable whole pieces is to line the interior bottoms of your cabinets.

For the bits of unusable bits I'd mash it into our gravel roads. You living in California probably don't have anything like that though.

I don't know if I'd put them in the garden. While most of the tile is clay, the surface is probably some kind of glaze compound that may or may not play nice in the garden. Better safe than sorry.
November 7, 2016 at 5:15 AM

Marlene Dotterer said…
Now I can see the photos! Wow, it's gorgeous! I envy the space, but you've done so much with it, too.

Thanks for the ideas on the tiles. Interesting about lining interior cabinets with them. I'll keep it all in mind.
November 7, 2016 at 10:24 AM

re: tiles
If push comes to shove you can always give them away on Craigslist. Maybe someone else can use them.
November 7, 2016 at 10:43 AM

betty said…
I hope your hubby feels better soon! I think the kitchen looks great! It is always amazing how much a remodel can cost. You can figure out why, but it still is "wow" when you see the final figures put down on paper. I for one look at the storage in a kitchen when looking for houses; been burnt a few times with inadequate storage. I think I would love your kitchen and its storage capacities!

re: storage
No storage is a deal breaker for me. I don't like things cluttering the counters.
November 8, 2016 at 1:50 AM