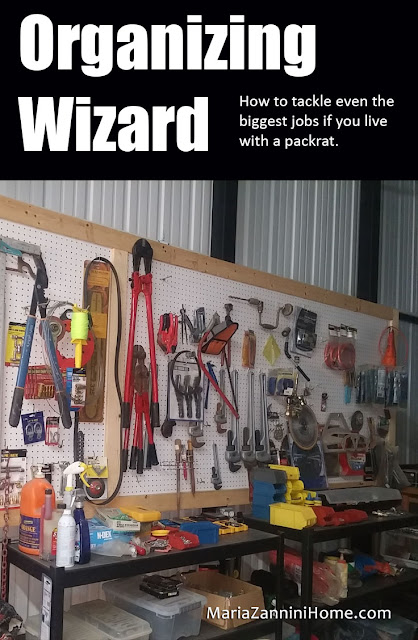 If I can do one thing well, it's organize. I'm the kind of person who can create order out of chaos and actually enjoy it.

So when Greg mentioned casually that he wanted to tidy his workshop, an enormous building filled to the brim with two houses' worth of stuff, I jumped at it.

I'd been wanting to clean his shop for two years, but I couldn't tackle it without him. Only Greg knows where he wants everything. But here's the rub. Greg is all about the shiny. That man can get distracted like no one's business. Me, on the other hand, I'd need a bomb to go off before you could distract me. When I'm on a mission, nothing gets in my way.

It was hard at the start. There was so much stuff and hardly any clear lines of traffic flow. We cleared one tiny area. That was my toe hold. From there I moved outward. I had him verify for me which set of shelves or cabinets were for each of his many pursuits.

One reason Greg has so much stuff is that he's quite handy. He's got an area for woodworking, electrical, plumbing, metal work, automotive, and plain, old puttering with gadgets. I'm glad he's so talented. I just wish he was a little more tidy.

Once I worked out where each station was laid out in his shop I went about sorting things. Automotive tools went one place, woodworking tools went somewhere else. Occasionally, I'd come across some gizmo I couldn't identify and I'd have to ask for help.

So far, we've thrown out twelve bags of trash, mostly bits and bobs of metal, plastic, and empty packaging. We even found an ancient Compaq laptop from the early 90s. That man keeps everything! 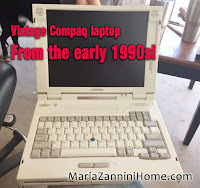 I separated out the combustibles like bits of wood or paper to feed a fire that included some much loved furniture.

During Iko's puppy stage, he managed to destroy an entire leather furniture set. We kept it for years because it was comfortable and because we really wanted to have it reupholstered. When I got the estimate, it was cheaper to buy new furniture than to bring our old furniture back to life. 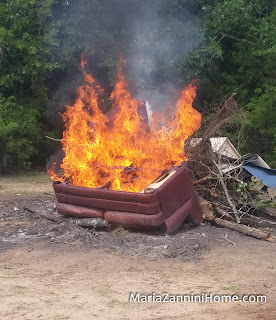 We emptied out file cabinets with tax records from the 1980s, old pay stubs, and receipts for things that no longer exist. We even found our original birth certificates! Other than important documents or things of sentimental value, everything went into the fire. No one cares what my phone bill was in 1979.

In all that organizing we found enough stuff to hold ANOTHER garage sale. I donated a ton of things last year, but this year we're going to sell or give these things away.

Last year, every charity we called said we were out of their district. Had I known this ahead of time, I would've left all that stuff on the curb with a FREE sign. In the end, we delivered to them, but it was very hard work.

I can safely say that once we have this garage sale, his shop should be a pleasure to use. I'm happy with what we've accomplished so far. I'm still trying to get him to let go of a bunch of auto parts (for cars he no longer owns), but he's been good about letting go most of the obsolete stuff. He even got rid of that ancient laptop.

I'll never cure him of his pack rat ways, but he's better. :)

• Start in one corner.
• Envision your paths of traffic flow.
• Sort likes with likes
• If you don't have pegboards and shelving, buy those first and install them in critical areas.
• Clear plastic boxes, wide tape, and a thick magic marker are indispensable for storing small items.
• Label every box, can, or barrel. You want to be able to see at a glance what's inside.
• Massive jobs take time, so only tackle one spot at a time and keep building.

Have you ever tackled what seemed an impossible mess? Did you ever find something cool in that stash? Do you have your original birth certificate?

Madeline Mora-Summonte said…
I don't know why, but that burning couch makes me think of some apocalyptic zombie scene. :)

Maria Zannini said…
Madeline: I think most people have over crowded garages. A shop should be a usable space though. I hate working in a mess.
May 31, 2017 at 3:50 AM

Mike Keyton said…
Of course I have my original birth certificate. Silly question. I also have my rationing card - I was a baby and rationing didn't end until some time after the war. I still have an Everard Avenue Library card from the 1960's as well as my Cavern Club membership card. So hand's off! Keep away! :)
The nearest thing to your clearout was when we converted our integral garage to a spare bedroom. A glory hole from two house moves. It was like some kind of Tardis - bigger on the inside than on the outside in terms of the amount of stuff it held. Couldn't believe it. The Charity shops got sick of us after a while.
I got sick of charity shops
May 31, 2017 at 4:04 AM

marlenedotterer said…
This is exactly how it was when I cleaned our garage. Still working on it..., but yes - I do have my original birth certificate. Sort of amazing, actually. I don't think I have anything else from my life before the age of 30.

Maria Zannini said…
Mike: Greg still had his draft card. I thought that was neat. In a hundred years from now some of things I burned will probably hold meaning to some social archeologist, but for me, it's trash. There's only so much you can hang on to before you're labeled a fire hazard.

re: ration cards
Now those I would keep as a reminder that today's society whines too much and don't know what real hardship was like.
May 31, 2017 at 6:04 AM

Maria Zannini said…
Marlene: We got married young, so we accumulated a lot by the time we hit 30. A few of Greg's tools are 40+ years, our marriage certificate, the driver's ed. certificate I got in high school, as well as various diplomas.

re: kids
Yup. You probably still have the stretch marks to remind you too. :) Kids and husbands leave us with stretch marks, gray hair, and scars.

re: birth certificate
Mine was a plain Jane certificate, but Greg had his little baby feet pressed on to his certificate. I thought that was adorable.
May 31, 2017 at 6:13 AM

Jenny Schwartz said…
I love throwing/giving things away! What's the opposite of a packrat? But I keep books, so many books. And I do have my original birth certificate. I even have my first tax certificate :)
May 31, 2017 at 1:15 PM

Maria Zannini said…
Jenny: What IS the opposite of a pack rat? Minimalist? Good question.

I'm not so much a minimalist as I prefer to be efficient. I like my pretty things around me but they have to be things that bring me joy or at least make my life easier. Everything else is clutter.
May 31, 2017 at 5:10 PM

lv2trnscrb said…
I do have my original birth certificate and hubby has his own original one too!

Seemed like a massive project you undertook but I think you went about it the right way with the way you organized it and attacked it, breaking it up bit by bit. Hubby's parents had saved every tax return in their 64 years of marriage. We shredded a lot of stuff; it would have been easier to burn it all but burns like that are frowned upon in Southern California :)

We did tackle an impossible mess with hubby's parents' home. Took 4 years, lots of Goodwill trips, about 5 or so garage sales, and finally a company that cleaned out everything for us, but it got done :)

Lynn said…
My guy and I are going to clean out his garage this Fall, so I am going to borrow your approach. :)

I did a massive clean out of the kitchen this year, and donated to Goodwill all the dishes and gadgets and stuff I don't use anymore. I found a plastic cereal bowl I used to fill with Cheerios and put on my daughter's high chair tray (this so I could do the dishes in the morning.) She would drop Cheerios one by one into our dog Missy's mouth, or throw them at my head. That did not get donated. :)
June 1, 2017 at 1:41 AM

Carole said…
The impossible mess... my life yes! When we decided to sell and move into a tiny house that has now been taken a step further to our RV the reality of cleaning out and downsizing his me hard. I got rid of 3/4 of everything and now that the rest is in storage I'm thinking if it was for some sentimental value I could get rid of it all. Well not the tools just the house stuff. LOL I love organizing and getting rid of stuff... My husband calls me the anti hoarder.. Love the burn pile and good luck with that garage sale. I sold large items on craigslist/facebook and the rest I just drove it all to second hand store each time I went to town.
June 1, 2017 at 2:14 AM

I did the clean out of my kitchen last year. At the end, I kept only one small box of valuable or sentimental things. I put it in the attic. The rest (2 truck loads) went to charity.

Maybe your daughter can use her cereal bowl for her kid one day. That would be a sweet tradition.
June 1, 2017 at 2:14 AM

Maria Zannini said…
Carole: I'd like to live in a smaller house, not as small as the one you have planned, but something manageable that doesn't require me to cross a time zone just to get to the other side of the house. (It's a very long house!) :)

Stacy McKitrick said…
Yes, I have my original birth certificate. I even know where it is! Haha!
We can park two cars in the garage, so that place isn't so bad. The basement, though... One of these days we'll move to a condo and then we'll decide what to do with the stuff downstairs. Until then, if Hubby wants to work on it, he can go ahead and do it. Most of it is his stuff anyway. :)
June 1, 2017 at 8:20 AM

Maria Zannini said…
Stacy: Ohhh....basements. That's even scarier than a workshop. The workshop has nothing but Greg stuff. Unfortunately, spouse does not have my mad skillz with organizing. It might not be why he married me, but it was a bonus feature. :D
June 1, 2017 at 1:10 PM