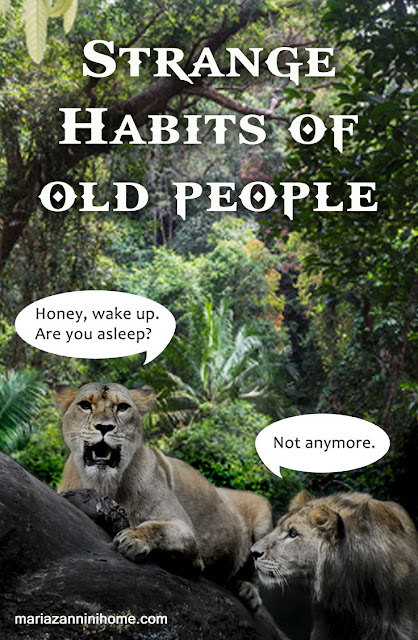 I don't consider myself old though it seems everyone else thinks I am--especially the government and those pesky surveys where they segregate you by age groups. Apparently, I'm now in the last category, 60+. I realized today I'm doing things only old people and new mothers do.

I get up earlier than roosters so I usually let Greg sleep in as long as he likes. Me being me, I start to get fidgety if he's still in bed past 8am, and I have to sneak back into the bedroom to make sure he's breathing. It sounds morbid, but I know there will come a day when he won't wake up--or I won't wake up.

If he's too quiet during the night it'll wake me and I can't fall back to sleep unless I see his chest rise and fall. Yes, I've been known to check for a heartbeat. LOL. Greg is a noisy sleeper, so when he's quiet, I get nervous.

We do other old people things too, like check on each other if we haven't heard a peep from the other in over an hour. If he's in his shop, I text him. If he doesn't answer in five minutes, I'll trot over there to make sure he hasn't fallen off a ladder or electrocuted himself.

We spot each other when we climb ladders or have to do something ridiculously dangerous like wrangle bitey snakes or destroy hornet nests. There are certain tasks I won't do alone anymore unless he's nearby, like lighting a brush pile. I'm very careful setting up my brush piles, but they can become monstrous fires in seconds. It's nice to have a second set of hands with a water hose or rake.

We were more adventurous (or is that reckless?) in our youth. We'd scale buildings and run around the roof without fear, but now--we let the professionals do it. Greg can fix most anything, but I'd rather have him on the ground than risk getting him hurt.

It might sound silly, but I trust my instincts too. I sense when something is awry and it forces me to investigate. Many times I've found animals caught in something, or a husband cussing when he has to climb down a ladder (yet again) when I arrive in the nick of time. Only yesterday, I saved our baby goat from getting strangled on a goat stand. I'm handy that way.

Please tell me I'm not the only one who checks to make sure his significant other is breathing. Do you trust your gut if it tells you something's wrong?

Madeline Mora-Summonte said…
You do know, right that most "old" people are not wrangling snakes or lighting brush piles or saving goats? At least the ones I know. And if you're "old" then I hope to be "old" some day, too. :)
August 30, 2017 at 3:09 AM

lynnviehl said…
I second Madeline -- and yes, if my guy stops snoring it wakes me up for a life check -- but I take his pulse at the wrist. :)

I always go with my gut -- it's never steered me wrong -- but I rely on common sense I learned from my years in the medical profession, too. One man plus a chain saw plus an extension ladder always equals trouble. :)
August 30, 2017 at 3:45 AM

Gwen Gardner said…
I do all of that--except the goats LOL. Just last week I scared the bejesus out of my hubs by laying a hand on him during the night, you know, just to be sure he's breathing. You just don't do that to a Vietnam vet. We were both wide awake after that. Hehe, yeah, he was breathing.
August 30, 2017 at 3:53 AM

Maria Zannini said…
ROTFL! I never thought of that. I know several people in their 70s who still dig ditches (by hand) and wrangle cattle. Hopefully I'll still be That spry when I'm their age.
August 30, 2017 at 3:56 AM

Maria Zannini said…
Gwen: I did that to Greg last night. I dropped the tv remote and he jumped out of bed.

Mike Keyton said…
I'm not 'allowed' to go up a ladder without supervision, but I do when Bernadette is not looking. Rock and Roll right? Your brush fires that threaten to get out of control made me laugh.
We have a bin like incinerator and it takes me ages to get even paper burning. Have pour sunflower oil or squirt WD40 on to it just to get the damn thing going. Welsh weather. :0
August 30, 2017 at 4:58 AM

B.E. Sanderson said…
Nope, you're not the only one. In fact, I had this very conversation with a couple of my friends the other day, and they also check to make sure their husbands are breathing.

We always know where each other are and we check on each other if anything seems amiss. It's usually me having fallen again or something. ;o) If I hear the lawnmower stop and stay off for a while I look out the window to check if he's just taking a break or if he's laying on the lawn somewhere. :shrug: It's never happened, but it's a thing with me.
August 30, 2017 at 5:06 AM

rmacwheeler said…
In our 'younger days' I was the one who always rose first. Now that we're old as dirt, Dina is out of bed long before me. I'll find her on her laptop. What could possibly be more interesting there than the inside of her eyelids?
August 30, 2017 at 5:33 AM

Maria Zannini said…
Mike: Not much you can do about the damp. I'm telling you, dryer lint works wonders as kindling.

re: ladders
Yeah, I don't like Greg up on ladders unsupervised either, but he likes to live life dangerously.
August 30, 2017 at 7:24 AM

Maria Zannini said…
BE: That makes me feel good that so many people check on their spouses (at least my friends on this blog). So often I see people in stores or outdoors and they seem so disinterested in their spouses, to the point of being dismissive. It makes me wonder why one stays with the other.
August 30, 2017 at 7:28 AM

Maria Zannini said…
Mac: That sounds like something Greg would say. He can sleep anywhere and anytime.
August 30, 2017 at 7:29 AM

Stacy McKitrick said…
You aren't the only one who checks on your husband. Hubby will be sitting in the chair next to me and get real quiet. I always check to see if he's breathing! But if we're watching TV, I'll tap his arm and tell him to wake up! He always answers, "I am awake."
Yeah, he lies a lot, too :)
August 30, 2017 at 2:43 PM

lv2trnscrb said…
Can't tell you how many reports I've typed of older men (usually) that have fallen off ladders, so its good you and Greg spot each other. These days one or the other of us usually move to the couch to sleep, so I'm not as worried as I used to be but in younger days when hubby wouldn't be in bed, I'd lay there and wonder if he was in the other room dead of a heart attack. And then morbid as I was, I'd start planning his funeral, what I would keep, get rid of, etc. I guess I was a bit too lazy to get out of bed to go check on him. However, when the wee one is over here taking a nap, I'm constantly going to check on him and I have been known to place my hand over his chest to see if he is breathing or not.

Maria Zannini said…
Betty: I did the same thing with my sister's first baby when I was pressed into babysitting. We probably checked on that kid every ten minutes. :)

LD Masterson said…
For years Stan suffered with Sleep Apnea. Or perhaps I should say I suffered because I swear it cost me more sleep that it cost him. He'd stop breathing and I'd lay there and count the seconds. I'd let him go 30, sometimes 45, then I'd smack him and he'd jerk and start breathing again. When he finally got tested, they said he had an episode (stopped breathing) on an average of 60 times an hour. That's easy math. Pretty much every minute. I spent my nights listening to him breathe, or not breathe. Now he has a CPAP. He doesn't snore. He doesn't stop breathing. And I lay there awake all night wondering what to do with myself. LOL
September 2, 2017 at 9:08 AM

Maria Zannini said…
Linda: We haven't yet opted for separate rooms, but I think that day might come.