Practical Independence: Why's it's better to go it alone 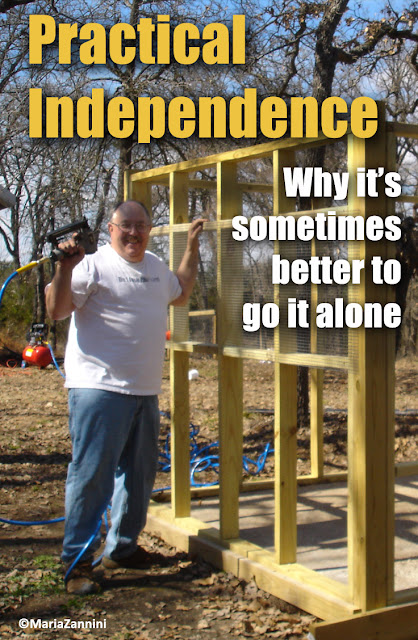 What with the hurricanes in the east and fires in the west, I felt this was the perfect time to start a series on Practical Independence. Besides, September is National Preparedness Month.

I tried to go to their site at www.ready.gov, but ironically, it was down.

This did not fill me with a lot of confidence.😮

On the other hand, it illustrates perfectly why I feel so strongly about being independent of government agencies--or any agency for that matter. It's not that they're not useful. It's that their structure is usually bloated with bureaucrats and red tape.

For this reason I prefer to take care of myself with as little intervention as possible. Better to be prepared for an emergency than to have to rely on help that might not come for days, or even weeks. It happens more often than you think.

Think of doing for yourself like a stopgap until the big guns arrive.

Of course, no one can be prepared for everything. Who expects to be in a car accident or an earthquake? You can't predict these things. But we can create a web of resources to help us weather emergencies and unexpected setbacks.

I didn't start out with sustainability genes. My family has no handyman blood in them. None. Zippo. When I married Greg I started from an absolute zero knowledge base. I couldn't even tell you the difference between a flathead and a Phillips head screwdriver, but I was willing to learn. That was all I needed to get my feet wet.

Being poor was also a fabulous incentive. We couldn't afford to replace things, so Greg fixed it himself while I fetched and handed him tools like a surgical nurse in an ER.

That was my introduction to self sufficiency and I've never looked back.

I'm telling you this because the first thing people say is that they don't have the skills. Heck, I didn't have skills! I'm not kidding when I say I was clueless. I truly was.

• I've killed so many plants Mother Nature probably has me on her Most Wanted list.
• Tums antacid should thank me for raising their stock price given my dismal cooking efforts during my early years.
• Being a klutz, I've shed enough blood to fund a blood bank.
• And don't get me started about how hard it was to save money when we had none.

What I'm saying is this. You gain skills by practice and by necessity.

It's daunting, but there's a real adrenaline rush to it too. More than that, the sense of accomplishment and confidence makes you feel like you can do anything. So how do you start?

Rule #1 for Independence: Learn to do things yourself

I was lucky. I had a mentor in Greg. He's a natural handyman and tinkerer. Even when he doesn't know how to fix something, he reasons it out. That's a phenomenal gift.

If you don't have your own Greg handy, you still have YouTube. It has a humongous library of videos that show you how to do almost anything.

Start small, and it doesn't even have to be terribly important. All that matters is that you learn how to do one thing by yourself that you would otherwise have hired out or bought.
• Learn to make a PERFECT cup of coffee.
• Make a first-aid kit.
• Grow potatoes in a pot. (My little 9-year old niece did this. I was so proud!)
• Refinish a worn out table.

The first step of sustainability is to manage on your own. Think back to your very first day away from home and away from your parents.

This is your first step, your first bike without its training wheels. I guarantee you can do it too.

What's one thing you've done alone that you didn't think you could pull off at first?

Madeline Mora-Summonte said…
Neither my husband nor myself are handy - we learned that when we bought our first house and thought we could paint that and change this and fix that, etc. Nope. :)

We do try to have a hurricane/emergency kit handy, including copies of important papers, extra water and foodstuffs, like granola bars etc.
September 18, 2017 at 2:41 AM

Maria Zannini said…
Madeline: If you actively maintain a hurricane/emergency kit, you're well on your way. I've been shocked at how many people don't even do that. Well done!
September 18, 2017 at 2:58 AM

Stacy McKitrick said…
I always seem to be in the house ALONE whenever there's a water issue. First it was a burst (frozen) pipe in the upstairs bathroom that drained into the basement. Then it was a busted sump pump hose that decided to discharge into the basement. And lastly, the water filter in the refrigerator malfunctioned. I'd hate to think what kind of damage we would have sustained if I WASN'T home, even though I was slow on the uptake in locating the shut off valve for #1 and #3. And these things always seem to happen during winter, too.

Gwen Gardner said…
Being married to a vet, we're prepared for an enemy invasion. Hehe. But lots of first aid, water and canned goods top off our emergency supplies.

This post reminds me of stories my grandmother used to tell about the depression. People learned to be self-reliant. Of course they grew their own food. And they used to get rabbits with barb wire down rabbit holes. Not a nice visual, but whatever you have to do.
September 18, 2017 at 5:12 AM

Angela Brown said…
My first introduction to REALLY doing some self-sustaining things myself was when I moved back to Texas in 2009. I decided to go all "college" style since my daughter was supposed to live with her father so he could feel like a dad or whatever, at least for a little while. I moved back with only what fit in my car and purchased things that had to be built. I asked for help and the person who helped was so good, even had my kiddo in the middle of all the construction putting things together. She had fun and I was intrigued enough to purchase my own toolkit along with a handheld power screwdriver. It was nice being able to put up my own pictures using a leveler, my own hammer and nails, and my own two hands.

This most recent move, I ended up buying a few things that had to be put together. Kiddo was older so together, she and I hung up pictures, built desks and chairs and side tables and, with the exception of my chair succumbing to my wide hips (lol!!!!) things are still working great two years later.

Reviewing a few of your posts, I've started getting better with keeping certain things stocked so we don't fall into the situation of rushing to the store before they run out of the necessities.

My next couple of things that I want to get are a small generator and portable chargers. A friend in Florida was able to keep in touch with friends because of her portable charger.
September 18, 2017 at 5:30 AM

Maria Zannini said…
Stacy: Oh, I hear you! This ALWAYS happens to me. I've lost count of the number of house catastrophes occurred while I was alone. Of course, I was alone a lot for 15 years so these things add up.

What doesn't kill you makes you stronger, I guess.

Thank goodness you were home when these things happened though. As I remind myself, it could always be worse.
September 18, 2017 at 6:26 AM

Maria Zannini said…
Gwen: I think we're more prepared for a banquet than an invasion, but someday we'll get a dog that doesn't think a squirrel is a mortal enemy. :D

re: rabbit
I've never heard of catching rabbits that way. Sounds a little gruesome, but you do what you have to do when you're hungry. I would've loved to have met your grandmother.
September 18, 2017 at 6:29 AM

Maria Zannini said…
Angela: Has it been that long? Seems like only yesterday when D was a toddler.

I'm proud of the way you stepped up and did for yourself. I've been reading some very disturbing stories about Millennials not knowing how to boil an egg or iron a shirt. How does this happen?

The majority of us are usually left to fend for ourselves when our partner is MIA or AWOL. It's not just fixing a door or changing a tire either. Men are sometimes at a loss for the finer things in life, like a home cooked meal or getting a stain off a shirt. Every little bit of knowledge adds up. It's nice when you can share skills, but more often than not we're alone through no fault of our own.

re: generator
Definitely. A generator although not used often is a real lifesaver. It's one of the best investments we ever made. If nothing else, get one of those tiny generators to keep electronics working.
September 18, 2017 at 6:39 AM

lv2trnscrb said…
This might be silly, but one thing I did alone recently was figure out why we didn't have Internet. I called my hubby when it was out on one computer and not another and he was helpful but not too much being 50 miles away. I usually freak out when dealing with issues like this but managed to call the Internet provider, they figured it was a signal problem and scheduled a technician, in the meantime I remembered to reboot the modem in previous times we had problems and it worked! Felt proud of myself for dealing with it on my own, LOL.

Maria Zannini said…
Betty: Not silly at all. The service provider taught me that. When it comes to computers I struggle constantly. I'll never be like these wiz kids, but I'm slowly adding to my bag of tricks to keep my computer/internet running.
September 19, 2017 at 2:02 AM

LD Masterson said…
When Stan was on active duty and traveled a lot, I got pretty adept at household repairs. I remember sitting at the kitchen table with a friend one afternoon while our kids played outside in the sandbox (we had a really big one). The kids kept coming in to use the little bathroom off the kitchen and managed to rinse enough sand off their hands to clog the sink. While we continued chatting, I grabbed the big pipe wrench, took off the trap, cleared out the sand, and put it back together. My friend was amazed I could do that. I was amazed she couldn't.
September 19, 2017 at 7:18 AM

Jenny Schwartz said…
The preparedness website being down won a wry smile from me :)

Good tips. And the confidence that comes from knowing you can do the basics of life is something I wish the education system helped convey to kids. I know school can't teach everything, but some of the stuff they waste time on ...! My sister's a high school teacher and I'm amazed each time she tells me that kids struggle with internet searches. I think people assume that some stuff is learned by osmosis, but it's not.
September 19, 2017 at 1:05 PM

Maria Zannini said…
Linda: And you didn't even have YouTube videos back then. :) Well done!

Maria Zannini said…
Jenny: When I went to school, some schools offered wood shop and home economics, but not mine. :(

Michael Keyton said…
I think you had the edge with Greg as your mentor. I stumble through via intuition, logic and persistence - to a point. I live in a 'village' of helpers.
October 7, 2017 at 10:02 AM

Maria Zannini said…
Mike: It helps that I have an interest in learning. You couldn't get any of my siblings near a hammer. LOL!
October 8, 2017 at 3:55 PM