Scavenge Your Way to Wealth 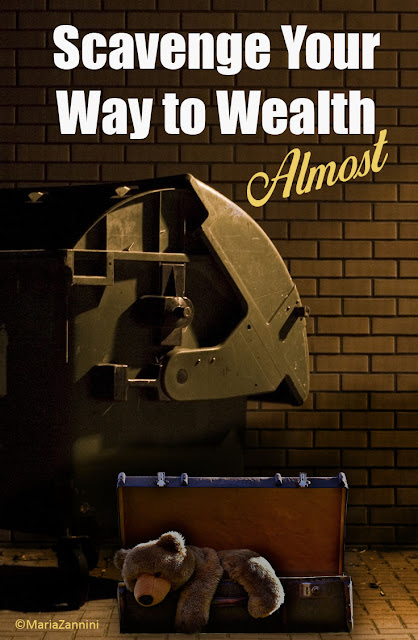 According to Dictionary.com, a scavenger is a person who searches through and collects items from discarded material. I'm sure if Dictionary.com had thought of it there would be a picture of me or Greg.

We're not as proactive as we once were. Truth be told, there isn't a whole lot more we need, so it's time to leave some of that recycled gold to someone else.

But in the old days, we were forces of nature. I introduced Greg to 'dumpster diving'. It was the brazen act of going into those giant dumpsters to see what could be salvaged. We weren't as lucky at dumpster diving as the pros. Maybe we just didn't live in the right areas for profitable dumpster diving. Towards the end, stores got smart and started using third parties to take stuff off their hands. Others went high tech and use sealed dumpsters that crushed everything into thin, flat squares.

Our more lucrative ventures came from finds along the highway, or late in the day when people were putting the last of their garage sale items out on the curb.

We don't always scavenge for ourselves either. A couple of times we found nearly new dog carriers from small to extra large. Those we donated to shelters.

We hit the jackpot one day when we happened to be coming home with an empty trailer. Someone had dumped half a household out on the curb. Probably our best score ever.

More recently, we've found tools, chain, and even a brand new rubber mat (used for horse stalls) all along the highway.

Believe it or not, we've even found folding money! But that doesn't happen too often. :)

A few tips if you ever decide to actively scavenge:

• Be prepared to stop or turn around if you see something on the road.
• Keep a pair of leather gloves in your car.
• A tarp or packing blanket is useful if you don't want to dirty your car.
• A few plastic garbage bags are also handy for messier things.
• Keep an open mind. You never know what you might find.
• Always--Always leave things neater than you found them if you're picking through someone's curbside leftovers.
• If you're unsure if it's a leftover, ask.
• Don't be a hoarder. If you know you'll never use that box of fabric or that broken rake, leave it for someone else.

Our favorite finds are usually things like lumber, metal pipe, and fencing material. We can always use that stuff around the farm. The rest we leave for someone else.

I have a confession to make though. I am a glutton for unloved solid wood furniture. I like to refinish them. Every once in a while I find an old broken piece on the curb and I beg Greg to let me take it home and restore it to life. I usually end up selling it, but I like knowing some of my handiwork is in someone's home.

Maybe scavenging didn't make us rich, but it sure helps defray the cost of living.

Over the years we've paid it forward several times too. As we've moved from home to home, we've always had plenty to leave by the curb. No matter what we've left, it was gone within hours. That's a good trade in my book.

Are you a scavenger, or have you ever found something interesting along the road?

Madeline Mora-Summonte said…
We used to go to garage sales a lot when we were younger and just starting out - pretty much how I got books. :) I don't recall picking anything up from the curb, though, but I know in the years since we've left some goodies.
October 9, 2017 at 2:30 AM

B.E. Sanderson said…
I did a lot of scavenging last year when the lake level was down, picking up fishing lures, hooks, sinkers, etc. (And all the garbage I could find because I hate seeing it.) I probably picked up a hundred dollars worth of fishing gear. I also found a fishing glove, a baseball cap, a nice wool hat, a cooler, several pairs of glasses - sun and vision. We keep what we can use and take the rest to the thrift store after I clean it up.
October 9, 2017 at 3:05 AM

Maria Zannini said…
Most of our scores are usually off the road, but every so often we're in a residential area. Saturday night and Sunday are usually the best times to find curbside leftovers.
October 9, 2017 at 9:19 AM

Maria Zannini said…
BE: That must've been amazing. It's like finding buried treasure. I read an article where a town (in China, I think) that had been submerged for centuries was drained while they redid their dam. Archeologists flocked to the area to take pictures before the water was released again.
October 9, 2017 at 10:11 AM

Stacy McKitrick said…
I was never a scavenger, but I did used to visit garage sales and auctions. Heck, we furnished our dining room, via an auction, at a fraction of retail sales (and still have the furniture, too). Now we don't need anything (we need to downsize), which is just as well since I don't have the time or patience to go through garage sales anyway.
October 9, 2017 at 4:28 PM

lv2trnscrb said…
l'm not a scavenger but have put things out for others to scavenge should they want to. I think the funniest one was when we lived in Southern California and were downsizing hubby's parents' home who were hoarders. They had so many old fridges and freezers that didn't work. Hubby arranged for the trash people to pick them up (you got at the time 11 free items they would pick up.) He put all the stuff out on trash day as instructed. By the time the trash people came to pick them up, nothing was left; it had all been picked up. So then we just started putting things out on trash day and sure enough everything would be picked up except for an old chest that drew no one's interest. Here in Phoenix every quarter they have bulk pick up. You can put out certain items too big to go into the trash, basically everything except appliances and concrete. It is fun to watch what people put out and then to see people come by and scavenge it. I guess it does help that it doesn't go into the landfill, right?

Jenny Schwartz said…
I'm a minimalist at heart, so on the whole I've given up scavenging. I do remember as a kid though roaming through the tip (do you call them rubbish dumps?). This was before health and safety banned that, especially for kids! Dad would take a load of rubbish to the tip, and then, look around if there was anything he wanted to bring home!
October 10, 2017 at 12:55 PM

Maria Zannini said…
Stacy: We loved auctions! We used to go regularly and that's how we furnished our home too.

Maria Zannini said…
Betty: That's funny about the freezers and fridges. That happened to us too, only we only had one freezer to toss. We called the garbage company and had it ready to pick up, but it was gone before they got there.

Maria Zannini said…
Jenny: I think I picked up scavenging from my dad too. LOL. My mother wouldn't be caught dead picking up anything along the road.
October 10, 2017 at 2:24 PM

lynnviehl said…
Our public library would put old or unwanted books and magazines in a freebie bin by the front door. It was meant for the adults, but once the librarians discovered how much I loved to read (and realized how poor I was) they let me take whatever I wanted from it. That was like Christmas every day.

My first apartment was furnished entirely with roadside treasures and things I found in the newspaper's "Free to a Good Home" classified section. That included a hideous but otherwise clean 6 ft. long couch upholstered with with a big cabbage rose print. :)
October 10, 2017 at 3:23 PM

Maria Zannini said…
Lynn: We were in similar straits during our early years. I used to be terribly embarrassed about our shabby digs until we became friends with older neighbors who became second parents to us.

They lived with shabby furnishings too, but they were comfortable, and that's all that mattered. I learned I was caring too much about what other people thought.

When I read about celebrities with gold toilets and $30k a month wine bills, I think of these friends, and remember what's really important in life.
October 11, 2017 at 2:39 AM

Michael Keyton said…
I don't scavenge except for books. Second hand bookshops lure me like magic and I come out with more books than money.
October 11, 2017 at 6:02 AM