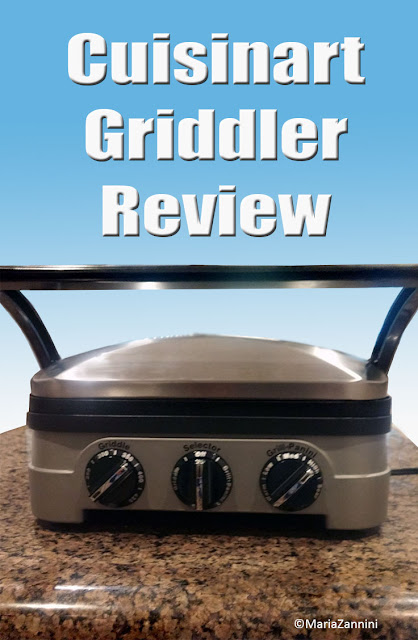 Holy moly! What planet have I been living on that I didn't take this gadget seriously?

Around Christmas it's not unusual for us to buy a little something for ourselves since there are usually sales everywhere. I'd been wanting a pannini maker for months, but I am loathe to give up any counter space for just any old gadget. When I saw the Cuisinart Griddler at a good price, I decided to do something un-Maria-like and bought it on a hunch.

It had a couple of features I really liked, like removable grill plates that makes it easy to clean. And while it's not as compact as other pannini makers, I like its weight. It doesn't feel like a cheap product. It works fast too. I can make two sandwiches for Greg and his stay hot until mine comes off the grill.

In short, it's been awesome! We've been experimenting with all sorts of grilled sandwiches.

It makes exceptional grilled cheese sandwiches. The cheese is all melty and gooey and it has the nicest grill marks on the bread.

We've been using denser bread like French bread and ciabatta which makes some really nice, hearty sandwiches. So far we've tried turkey, ham, prosciutto, cheese, and veggie sandwiches. The heating element is hot enough that it cooks the vegetables perfectly so no need to prepare them separately. I'm looking forward to the next time I have leftover roast beef in the house. 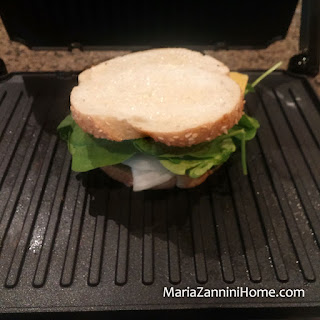 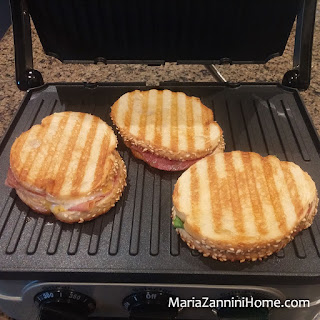 It's important not to over stuff the bread, but the sturdier the bread the better it will hold the stuffing. You can grill meat on the open grill, but we haven't tried that yet.

I have this idea of layering thin slices of apple on white bread, then sprinkling cinnamon and little dabs of butter over the apple before covering it with another slice of bread. I'll bet it'll make a good dessert.

Waffles: Greg has been begging for a waffle machine for ages. I've refused because I didn't want an appliance

that only did one thing. The Griddler was so impressive, I decided to spring for the waffle plates. Some of the higher end pannini makers come with waffle attachments, but this one did not.

It makes a decent waffle. It doesn't brown the top as well as the bottom, but Greg is happy with it so I guess we'll keep it. At least now I won't have to get those sad puppy dog eyes every time he  wants waffles.

Do you have a pannini/sandwich maker? Do you have any suggestions on what else I could try on it?

We've been using ours steadily for weeks now. We've been so happy with the sandwiches we've been making that sometimes we forego my planned dinner in lieu of a hot sandwich. Much easier on me, that's for sure. It turned out to be a good 'house' gift.

B.E. Sanderson said…
I have a George Foreman. It makes awesome grilled sandwiches, burgers, and boneless chicken (as long as it's not too thick.) I've also made brats and hotdogs with it, but that doesn't work too well because the Foreman is tilted to let the grease run off, so the sausages want to roll away. It works for me, but yours sounds way easier to clean.
December 6, 2017 at 1:37 AM

Maria Zannini said…
BE: The ease of cleaning was what really sold me on this particular machine. One button releases the plates. I was surprised how fast it was too.

I'll have to try grilling sausages on it. I hadn't thought of that. I'm so used to Greg grilling outdoors, but this might be especially useful when it gets too cold and we want a little grilled meat for dinner.
December 6, 2017 at 1:53 AM

Madeline Mora-Summonte said…
We've been thinking of getting a waffle maker and/or a pannini maker but I also hated the idea of a gadget that only does one thing. Just because I have the space/room in the kitchen doesn't mean I want to fill it! So, this sounds great. Making a note for maybe in the new year. :)
December 6, 2017 at 2:26 AM

Marianne said…
We don't have a grill at home anymore (we spend most of BBQ weather at the lake), but I do miss grilling meats, etc. This might work as an adequate substitute... hmmmmm...
December 6, 2017 at 2:35 AM

Maria Zannini said…
Madeline: This is the one! I'm surprised I waited so long to try it. They've been around forever.
December 6, 2017 at 4:36 AM

Maria Zannini said…
Marianne: I wish I could tell you how it is for grilling meat, but we haven't tried it that way yet. The other reviews seem to think it works though. My sister PM'd me that she grills vegetables on hers, so I'm definitely trying that soon.
December 6, 2017 at 7:55 AM

Maria Zannini said…
Stacy: I was at Kohl's the other day and it was a hundred dollars more than what Amazon was selling it for. You really have to check prices.

lv2trnscrb said…
I've seen the pannini grills out there, but I wasn't sure how long I would be dedicate to using it and then would it clutter up a part of the counter? But your review of it sounds like something I need to be pursuing perhaps in the new year.

Maria Zannini said…
It's one of the best buys of the year for me. And it makes a great present. Not too expensive, and useful.
December 7, 2017 at 1:26 AM

Maria Zannini said…
Betty: Because our schedule has been crazy lately, we've gone back to quickie meals instead of a full dinner. This helps, especially when we're short on time. We can grab a sandwich and get back to work.
December 7, 2017 at 1:29 AM

Gwen Gardner said…
I'd buy it just for the grilled cheese sandwiches! We love grilled cheese with tomato soup in the winter time. My hubs is so thankful for anything I make, really, because we don't cook. I've been on this diet for a year that requires me to eat tv dinners. I've lost 40 pounds, but we sure miss real food!
December 7, 2017 at 3:38 AM

Maria Zannini said…
Gwen: That was my underlying reason too. :) Grilled cheese sandwiches turn out so much prettier in this thing than when I make them in a skillet.
December 7, 2017 at 5:14 AM

Michael Keyton said…
I got rid of a George Foreman (a gift) because of space and lack of regular use, so it would be a hard sell - to myself as much as anyone else in the Keyton household to buy another - similar- contraptions. Tempting though :)
December 7, 2017 at 9:48 AM

Maria Zannini said…
Mike: I think the George Foreman grill is significantly larger than this one. I could've gotten a slimmer model, but his one had removable grill plates and I liked that.
December 8, 2017 at 8:14 AM

lynnviehl said…
My mom gave us one of those George Foreman mini grills, but it was too small for a family of four, and my guy really likes our outdoor grill. I think I passed it along to a neighbor who was newly single.

On yours I'd try to do some skewers -- shrimp don't take long. Fish fillets also work, although you'd have to watch the heat. If you season some medium-thin potato slices you could probably make home fries faster than in the pan or oven. Lamb chops would probably be too greasy, but pork chops or sliced tenderloin would be okay. We cook thin-sliced chicken breast with barbecue sauce on our outdoor grill, but we almost always singe it, so it would likely work better on your griddler. Fresh asparagus, too (disclaimer: I love grilled asparagus.)

Maria Zannini said…
Lynn: I don't know about the George Foreman, but most of these pannini makers are more for couples or singles.

Greg grills too, but he always makes too much food. On days when we just want a quick grilled meat, this fits the bill.

re: asparagus
I have a ton of asparagus from the garden in the freezer. I am definitely going to grill some of them. :)
December 9, 2017 at 2:04 AM

I was just reading an article on cooking hacks that recommended putting a layer of lemon slices on the grill to cook fish -- you put the fillets on top of the lemon, which protects the fish from getting scorched -- while adding a little flavor. I bet you could do the same thing with your griddler.
December 9, 2017 at 11:46 PM

Maria Zannini said…
Lynn: Now that's a good idea. I still think I might need some nonstick spray to keep the lemon slices from scorching the pan though.
December 10, 2017 at 5:44 AM