The Hard Facts About Nonstick Pans 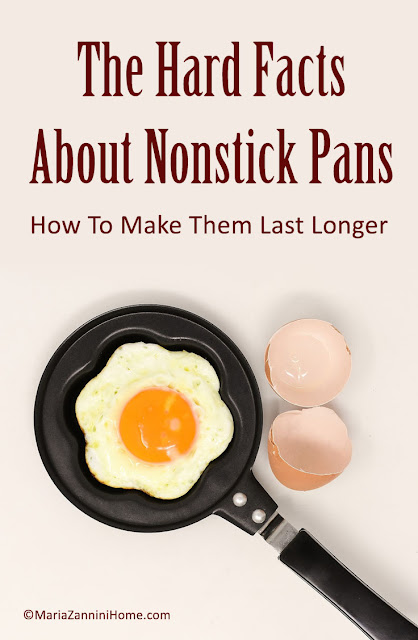 For the longest time I thought I was doing something wrong because my nonstick skillets wouldn't last more than a few years. I even bought high dollar cookware, but their lifetimes were barely better than the cheap pans.


Finally, I switched to hard anodized skillets. I generally got a couple more years out of them.

Still, considering the cost you'd think cookware should last a lifetime. Only my cast iron skillets will outlive me by generations.

I decided to do some serious research before I forked over any more dough to this folly. Imagine my surprise when experts claim that the nonstick cookware is NOT designed to last more than five years.

I wasn't happy about the answer but at least I felt a little better about myself. I was sure I was somehow responsible for their early demise.

Nonstick aluminum pans are my least favorite. There are some studies that suggest cooking on aluminum will elevate your risk for Alzheimer's. For this reason I 'stick' to hard anodized steel skillets, and won't recommend aluminum.

I'm very fond of porcelain clad cast iron, but those are pretty pricey. I've only ever bought one, a Dutch Oven that I use for my soups and stews.

Like regular cast iron, they're heavy, so it's not my first choice for everyday cooking.  Now if you're looking for something to stick in the oven or heat for many hours, this is a great pot.

Hard Anodized is my skillet of choice for every day cooking. From omelettes to stir frys, it's light enough to pick up with one hand, with a coating thick enough to keep food from sticking. But mind the warning from the experts, none of these nonstick skillets last longer than five years without becoming pockmarked. High heat is the nemesis to nonstick pans.

For my money, I prefer Calphalon, though I have bought Cuisinart with near equal satisfaction. They're heavy enough to withstand some punishment, and it comes in several price points depending on your preference. I generally choose the mid-range.

Stainless steel is not nonstick, but I thought I'd mention it because that's what Greg bought for himself when we lived in separate houses. You have to make sure it's well oiled, but what I like best about steel is that it cleans exceptionally well. I think it cooks beautifully too, but my choice is still nonstick even if I have to replace them every five years. It's good for higher heat needs too.

When we combined houses, I kept the large skillet and a couple of sauce pans.

By the way, the best steel cookware I ever used was All-Clad. It wasn't mine, but I cooked on it once and could definitely tell the difference in quality.

Finally, I want to mention cast iron. Heavy and cumbersome, but if you season it right it will outlast your children's children. A cast iron skillet is phenomenal for steaks or anything else that requires high heat. You can bake with it too. Greg has made the best pizza using the lowly cast iron skillet.

Note: This is the one piece of cookware that I wouldn't hesitate to buy at a garage sale or thrift store. They could be grungy and ugly, but some elbow grease with a wire brush and proper seasoning, and that pan becomes good as new.

Tips for keeping your nonstick pans from dying an early death.

• Try not to use metal cooking implements. Choose wood or silicone spatulas and spoons.

• Use oil or butter rather than cooking spray. I learned the hard way that prolonged use of cooking spray will create a buildup that's impossible to remove.

• If you must use aluminum rather than steel, remember that highly acidic foods react to aluminum and copper. It'll give your food a metallic off-taste.

• Wash them by hand but don't let them sit in water. It's a bone I pick with Greg because he likes to let cookware sit in water to soften dried-on foods. As soon as it's cool enough to touch, I prefer to wash the skillet, towel it dry and let it finish drying on the stove.

As a present to myself this year, I retired my old pans and bought new ones.

How long do you keep a skillet?

jacabur1 said…
I adore cast iron skillets, for use in outside cooking mainly on Karl's propane burner cooker because we love to fry chicken or pork chops in summer occasionally. Do not fry indoors for several reasons, first of course is the mess and second is the lingering odors left in house for days after from the oil.

Maria you mentioned stainless steel for its ease of cleanup if used correctly, I agree. However the beautiful set my Mom gave us as a wedding gift was lost in 2011 and since we only used the one skillet, one small pot and the dutch oven it was replaced with it's cheaper cousin the nonstick set we have now had for 6 years.

The truth in the statement you should only use wooden or silicone, in my case cheaper plastic, spoons and spatulas or the nonstick pan ruins quicker with metal implements.
January 10, 2018 at 1:20 AM

lynnviehl said…
I've had the same problems with non-stick cookware, so I use mostly stainless steel. I did invest in a ceramic-coated skillet last year, and after a few months of constant use I noticed the white coating is gradually becoming discolored. Also, ceramic heats up very fast, and stays very hot, so I had to adjust all my cooking temps and times. I also hand-wash all my pots, but if you prefer the dishwasher most ceramic cookware can't go in it.
January 10, 2018 at 2:46 AM

Maria Zannini said…
Jackie: I hated to admit to Greg that he was right about the stainless steel, but in the end, it's longer lasting than nonstick. Sometimes I just want food to slide right off and only nonstick can give you that without using fats.
January 10, 2018 at 4:04 AM

Maria Zannini said…
Lynn: Oh, I was so disappointed when my ceramic coated stockpot started discoloring last year. I had cooked down hundreds of pears over the summer and by the time that was done my stock pot never looked the same.

I've heard of people putting skillets into the dishwasher but I've never tried it. To me, that's strictly for hand washing.
January 10, 2018 at 4:08 AM

Stacy McKitrick said…
I keep a skillet forever. Okay, not forever. Probably when it stops being non-stick. But since I don't cook every day, they last longer than 5 years. I think the set I have now is at least 10 years old. Maybe older. I can't remember when I bought pans last! But 5 years seems awfully quick for something that don't come cheap. It's a racket!
January 10, 2018 at 5:16 AM

Jenny Schwartz said…
I get attached to my pots and pans ... but you're right, they do have a useby date, sadly. I'm leaning more toward stainless steel at the moment, like Greg. It's much harder to fry with cheese - ugh, sticks! - but otherwise, I like it. Nice and solid, too. Some of the cheaper frypans buckle.
January 10, 2018 at 11:00 AM

Maria Zannini said…
Stacy: I cook several times a day so it's not that I don't give them a good workout, but I do wish they'd last a little longer than they do.

One expert I read said you're better off getting one of the cheaper brands because they'll all conk out on you within the same period of time anyway.
January 10, 2018 at 11:43 AM

Maria Zannini said…
Jenny: It's hard for me to let them go too. I especially liked this last set. Greg had to pry them out of my hand and into the trash so I'd start using the new ones. :D

Michael Keyton said…
I have large cast iron enamel oven dish (creuset) expensive, heavy but worth every penny. I also have steel skillets of different sizes and a small hard anodized omelette pan which has worked well so far. What I would love is a cast iron skillet ALL READY SEASONED. Can't get my head around seasoning it myself. A salutary warning/reminder. An old blog post of mine highlighted the flaws in non stick roasting trays with life-time guarantees. What bothered me most was when it begins to flake you're ingesting these chemicals in your food.http://baffledspirit.blogspot.co.uk/2014/02/debenhams-or-amazon.html
January 11, 2018 at 4:24 AM

Angela Brown said…
I haven't tried stainless still. That may have to be among my next kitchenware pieces I save up for.

I usually replace my cookware every 3 to four years, basically around time I'm ready to move again lol! I've used Paula Deen cookware, Rachel Ray, and some other fancy name that I can't remember. 3 years in, all have about the same result.

Gwen Gardner said…
That's an interesting fact about the link between cooking with aluminum and Alzheimer's disease. I know, or know of, many people with the disease. It makes me wonder...

I love my non-stick pans. We don't use anything metal with them. We use wooden spoons or heavy plaster spatulas. We have cast iron but rarely use it.
January 12, 2018 at 7:59 AM

Maria Zannini said…
Angela: If you want a frying pan that will last longer than five years, go with stainless steel. The only thing you have to worry about is keeping it well oiled because literally everything will stick on it.
January 12, 2018 at 11:05 AM

re: aluminum
That's a claim that's been talked about for decades. I hated to give up my aluminum pans back then, but it's not worth taking the risk.