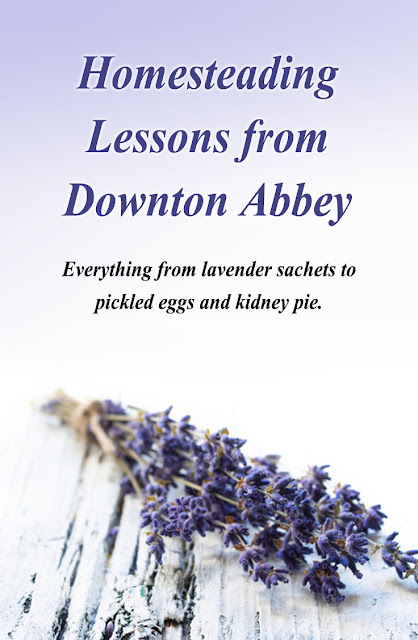 Once a year we binge on Downton Abbey. It was a hard sell for Greg the first time we watched this, but after the first couple of episodes he was hooked. This is our third year of binging it and we're familiar enough with it to give us a chance to examine the background activity done by servants and villagers as they go about their day-to-day lives.

The 1920s were a turning point for many nations at that time. "Modern conveniences" were starting to appear. Even then, work was terribly hard.

One of the things that made Downton Abbey feel so authentic were the backdrops. Things like the early electric lights, carpet beaters, and egg holders gave it a sense of period.

Cupboards were equipped with all sorts of basic ingredients to do everything from cleaning the scale off copper pots to making a liniment for an ailing horse. They even made their own lavender sachets.

I love that Mrs. Patmore, the cook, and Daisy, her assistant were always busy. Nothing seemed to go to waste either. One day they could be making pickled eggs or bubble-and-squeak, not to mention unappetizing sounding delicacies like spotted dick or kidney pie.

It's unfair to judge people's tastes. I'm sure the food I grew up with might seem strange to them too.

I'm a glutton for historical novels and films. If the research is top shelf, you can learn a lot. Both Greg and I tend to have our smart phones nearby so we can check on the historical accuracy of things that catch our eye. Culturally, I think Downton Abbey whitewashes some of the historical events to keep up the entertainment factor, but it's a tv show, not a documentary so I let it go. I'm more interested in the bones of living during that time period anyway.

As a homesteader, watching Downton is a little like getting an education for managing without the barest of conveniences. We came away thinking how hard people worked back then. Is it any wonder they wore out so quickly?

I work hard, but I don't work 16-hour-a-day-hard. (At least not anymore.) When I spend a day mucking pens or clearing the woods, I come home to a hot shower, and heat or air conditioning, depending on the season. I also have the luxury of getting an accurate weather forecast for the next ten days in case I don't feel like working in the rain.

Medicine is another thing that's brought up a lot in the series. It makes me grateful that doctors understand eclampsia and that it's no longer a death sentence. My sister had it when she delivered one of her children. It's heart wrenching to think women died from that.

We still have a way to go before we get to "Star Trek" medical standards, but we're in far better hands than people during the 1920s.

As period films go, Downton Abbey might not be historically accurate with their handling of servant shortages, jazz musicians in their great rooms, or teenagers chatting with the king, but the backdrops, equipment, and furnishings seem very accurate and I like that.

It makes me glad for an easier lifestyle.

Are you a Downton Abbey fan? Are there any historical inaccuracies that you've caught?

This post did not make the transfer from Wordpress so it's been recreated without the comments left on the original post.