Homelessness Can Happen Even To You 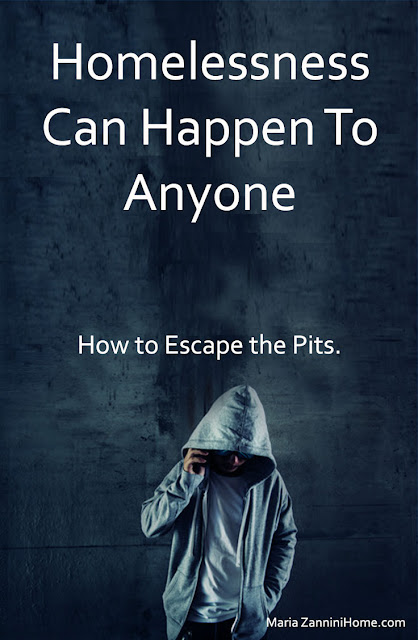 Most of us think it can never happen to us. I was sure of it. Yet, I had been left homeless twice in my life.

The first time was during Hurricane Rita. We lived in our damaged home, but it wasn't safe, and I was terrified the whole time. Greg kept assuring me we'd be all right despite three gigantic trees pushing all their weight on our roof.

I did not believe him. I knew he would do anything NOT to leave our home abandoned, so I felt he had ulterior motives to keep us there even though it wasn't safe. If it were me, I would've pitched a tent--if I had a tent.

For days until we could get help, I listened for every creak and groan. It was an old house and the timbers were sturdy. Greg was right that if it held after the initial crash, it wouldn't crash further. But it still didn't make me feel any safer.

I can tell you for a fact I stayed out of that house as much as I could until we could get a crew to lift the trees off with a crane. We slept in the only room that wasn't directly under a tree.

The second time I became homeless was a fluke. I had a choice. Either I could be homeless or jobless.

We had bought a home in the country (the home we have now). Only there was a snafu with the survey. They said the bank sold us a house and two acres instead of a house with six acres. The deal was off unless the bank could find out what went wrong.

Only there was a problem. I had already sold my city home. I had less than two days to make a decision.

You know how it is when you're selling or buying a home. By the time you've reached the peak of the process you're sick of it and just want it to end as quickly as possible. That's where I was.

I thought about getting an apartment, but I had to find one in under 48 hours, and then to what end? We had lost our dream home. I didn't want to start over. It had taken us a year just to get this far. The only other option was to go back to my home with Greg in SE Texas. It meant I would lose my job. No matter which route I chose, I would be starting back at zero.

Enter my best friend, who I bumped into quite by accident at the grocery store. She could tell I was in a dark place. I was probably ready to burst into tears. At this point, I hadn't told anyone of our dilemma. She came up with a solution that gave me room to breathe and make the right decision. She offered me an air mattress and a dry roof while I figured out what to do.

It took three weeks. It was all the time the bank needed to make things right and straighten out this mess. I could never thank her enough for helping me through a very emotional and tumultuous time.

Neither of these situations were dire. There was always a way out. It might not be the prettiest way out, but at least I had options.

Sometimes we don't have options.

I'm a very proud person and I wouldn't ask for charity even if I needed it. I'm fairly certain most of us fall into this category. That's why it's extremely important to swallow your pride and ask for help as soon as you know you're in trouble.

There are lots of reasons to become homeless, such as fire or any other natural disaster. Sometimes you have to leave a home to keep you safe from physical abuse. People who live from paycheck to paycheck are also on the knife's edge of becoming homeless.

No matter what your circumstance here are some things to consider.

• Make an account of what you have. Do you have an emergency fund? Relatives? Friends?

• Are you safe? This is especially important if you have kids.

• How long can you manage on what you have?

• If you live in a good sized city, there are loads of organizations that can help you. Go to the city government's web site and see what's available.

• If you live in the boonies, your resources are more limited. Sometimes you can get help from the county or federal side. Start with the county first. If all else fails, call your local law enforcement. They can probably steer you to lesser known local resources.

• The Red Cross is always available after a natural disaster.

• Your church is also a wealth of resources and networking.

• If you’re not homeless now, for heaven’s sake, start an emergency fund. Grow it until there is a minimum of three months salary.

• If a neighbor, friend, or relative has taken you in, get on your feet as soon as possible. You don’t want to be a burden. Sweep their floors, wash dishes, or at the very least, stay from underfoot.

• Pay it forward. If someone has helped you, help someone else once you’re back on your feet.

Sometimes we become homeless through no fault of our own. Even if you have enough money to blow on a hotel room, it's still a huge inconvenience and a black pit of not knowing where to go next. What most of us need is time--time to figure out what to do next.

Get your ducks in order before it happens.  And if the worst should happen before your ducks are straight, ask for help, and expect to suffer for a little while. They don't call it bad luck for nothing.

Have you ever been homeless? What did you do first?

Go here to learn how to Grow an Emergency Fund.

jacabur1 said…
Maria the first time for me being "homeless" was in 1982 as a Newlywed 19-year-old of only 3 months. Our poor landlady died of blood clots in her legs while in the hospital after she broke one of her hips.

That was a very sobering experience, we were a 1 income family with limited resources and no real alternatives as far as help from anyone in the same town because even the older folks we knew did not have space for us two and our meager belongings at the time.

Plus like you we are very independent, proud folk who hate to ask for help for any reason.

Luckily my husband's boss had a 1 bedroom 1 bath wood frame home he rented us for the same tiny amount we were already used to having paid at our prior abode.

2nd time of course you know about in 2011. The loss of our entire home and it's outbuildings and all contents destroyed by fire when 1 is in late 40's was an even more devastating wake-up call at the ease of which ones life can change.

Luckily by that point we did have enough money to survive, motel rooms which we lived in for 10 days with our 3 small pets and my Widowed Mom were our uncomfortable but thankful home base.

Gwen Gardner said…
I've never been homeless, but I've been broke. At one point in our marriage the hubs wanted to borrow money from family. I refused, saying that we got ourselves into the mess, and we could get ourselves out. And we did. It worked out for us that time. Still, what's that saying? Pride goes before a fall?
May 14, 2018 at 5:48 AM

Maria Zannini said…
Jackie: It's hard to believe that fire was seven years ago. It was a tremendous blow for the Texas hill country.

When we moved to Texas there was a housing shortage. We could not find an apartment for love or money. We lived in a motel for 6 weeks! We were so tired of living out of suitcase.

Then one day Greg found an ad for an apartment just across the highway from the motel. We drove over there and the landlord just got back with another man who had looked over the apartment.

He said he was going to lunch and think it over. The landlord looked over at us, then asked him if he wanted to leave a deposit in case someone else came for the apartment, and he said no.

When he left, Greg asked her how much the deposit was then handed her cash on the spot. THEN we asked to see our apartment. LOL!

Maria Zannini said…
Gwen:
re: I refused, saying that we got ourselves into the mess, and we could get ourselves out.

I think everything has to be put in perspective too. I have a friend with an adult daughter who is always getting herself into financial difficulty--and then getting bailed out.

Every young couple I know goes through something like this. It's tough getting started and sometimes we make mistakes. If you make a mistake once and get help, that's fine, but if you keep doing the same thing knowing someone is going to bail you out, you're not learning, you're mooching.

Jenny Schwartz said…
It's frightening how fast things can fall apart, and how long it can take to recover. Good tips, especially that of asking for help. So hard to do.
May 14, 2018 at 12:52 PM

Angela Brown said…
Although I can't say that I've been homeless - usually had a plan of borrowing space from a family member for a couple of weeks during state-to-state moves - I can understand what you're talking about.

I've taken in family on a few occasions when they experienced a homeless situation for several months. And now I'm in the process of starting some things over in my financial life with growing an emergency fund as part of that process.
May 14, 2018 at 1:18 PM

lv2trnscrb said…
By the grace of God, I haven't been homeless. It is a terrible predicament to find oneself in no matter what the circumstance. Its one that I think one can get themselves out of if they are willing to ask for help and then participate as they might have to with programs like through rescue missions, etc. Emergency funds definitely are a necessity in this day and age.

Maria Zannini said…
Jenny: You are absolutely right about how fast it can happen. Sometimes it seems like everything is swimming along well and then the bottom falls out. I think that's what can make it particularly scary.
May 15, 2018 at 2:31 AM

Maria Zannini said…
Angela: Once you reach that magic number of 6 months of your pay in an emergency fund, you're going to find a huge weight lifted--whether you have an emergency or not. It's the security of knowing you have it. It really makes a difference.
May 15, 2018 at 2:33 AM

Maria Zannini said…
Betty: Many churches organize disaster relief too. I got to know several people who did this and they'd travel all over to help. It was amazing to see how organized they were. They did it all only as a blessing to others.
May 15, 2018 at 2:48 AM

Michael Keyton said…
I'm one of the lucky ones, too - never been homeless, though my daughter is walking a tightrope in London - so far so good, as they say. What resonated with me most was your comment " Pay it forward. If someone has helped you, help someone else once you’re back on your feet." With me it was the generosity I experienced that year in America, and one particular incident when I was destitute in Spain for a week. The kindness of strangers. Despite the mean inclinations of one brought up in 'austerity' I try to pay back when I can
May 16, 2018 at 4:28 AM

Maria Zannini said…
Mike: I can't even imagine how expensive it must be to live in London. But she'll make it. She's got all the drive and imagination of youth.
May 16, 2018 at 10:47 AM