Meet Jammy: The Luckiest Kitten in the World 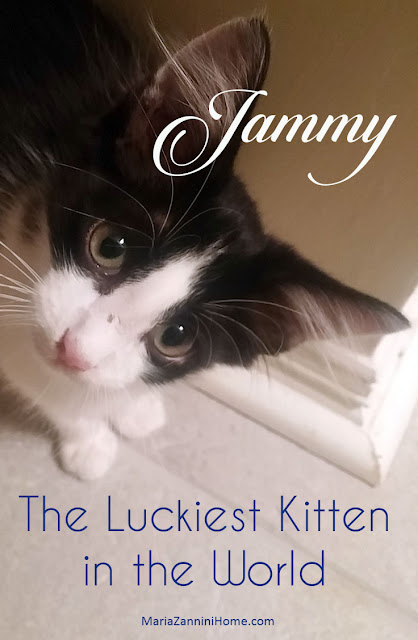 Greg spotted this little kitten first. He was in the garden, perhaps feeling safest there since there was plenty of cover and a fence to boot. He hightailed it out of there as soon as we appeared. That night, I found him racing out of the chicken yard as I came in to lock the chickens up for the night. He had been scavenging, eating some leftover pasta I had given the hens.

That was it. Maybe I couldn't keep him, but I wasn't going to let him starve. The next morning I called to him and he meowed back! All I had was dry dog kibble so I started with that. I set it down and walked away. He wolfed it down. The poor creature was starving.

He wouldn't let me get near him, so I asked my Facebook friends, many of whom are experts with cats and cat rescue on how best to approach him.

The best advice was to trap him or lure him with smelly tuna. Both worked! That night he had actually trapped himself in a trap set out for raccoons. I guess that was one way to keep him safe from predators. I moved the trap into one half of the chicken yard, separate from the hens, and set him free inside the confines.

He raced to the fence and tried to escape to no avail. He was trapped and he hissed when I came near.

I set a bucket upside down and sat down with a bowl of smelly tuna. He didn't trust me at first, but never let it be said that I am not persistent.

I spoke to him gently, never forcing myself on him. I left the food between us and walked away. When I came back an hour later, the food was gone, but the kitten was still there. Again, I sat down on the bucket and talked to him. Nada. He wasn't ready to trust me yet.

That's when I did something a little off center. I had brought out the heel of a loaf of bread that I was going to give the chickens. Instead, I offered it to the kitten. He didn't take it of course, but the smell of the bread was enough to break the ice.

I let the bread touch his cheek. He inhaled the aroma and I could see his little body soften. Again I stroked him with the bread and slowly started to pet him with my other hand. He started purring. I took a chance and picked him up. He stiffened but didn't resist.

I placed him on my lap then stroked him, looking for parasites and burrs. I was shocked when he closed his eyes and stayed there with no effort on my part. He had ticks, so after I petted him for a while I put him back down so I could get my tick remover.

When I returned he watched me carefully but didn't resist when I picked him up. I started grooming him again, pulling ticks as I found them. I brought food with me, but I didn't give it to him until I had finished my inspection.

He was nothing but a little skeleton, his ribs sticking out like piano keys. It was then I decided to bring him in the house. We have a nice bathroom that's rarely used and away from much foot traffic. I made him a litter box, brought out water and some more food. Several times a day I'd come in and talk to him.

By the next day, he was peeking around the corner and greeting me. He's still skinny, but his belly is full and he purrs and talks almost constantly when he sees me. He's quiet when he doesn't know I'm there so I have to assume this conversation is for my benefit.

My vet was out of town, but I took the little guy in as soon as possible. She thinks he's nearly 12 weeks old, but he was so malnourished he's a little stunted right now. I also thought he was a she! The first time I examined him, his little nuggets hadn't descended. One of them finally came down this week. Ha! In my defense his one testicle is the size of a radish seed. So Jasmine has become Jammy.

He's been given a clean bill of health despite his rough start. I'm hoping he and the dogs will give each other space because I'd like him to be able to come and go as he pleases. (We have a doggie door.) I prefer not to keep a litter box in the house. For now I'm keeping him confined until he's reached a healthy weight.

We haven't had a kitten in the house in 35 years so this will be a challenge--more for Iko and Nana than us, but we all have to share a space with our new child. By the way, he has Greg's eyes. Hazel green. :)

The bill for Nana's surgery was suck-the-life-outta-you crushing. And we lost our central air, so that's salt on an open wound--on a retirement income, no less. We really, really didn't need to spend any more money for a few months, but we couldn't abandon Jammy considering the condition in which we found him. I hope we get brownie points in heaven for saving this one.

Do you have any recommendations on how to get dogs and cats to get along? I'm more worried about Nana than Iko. He's just curious, but Nana can be a bit of bully. Luckily, Nana is still under 'house arrest' and must stay inside her little pen with limited exercise.
Labels: Home amp; Life pets

B.E. Sanderson said…
Yay! I hope Jazzy grows up big and strong. I thought my Kira would be stunted when we first got her because of her rough start in life, and she was a relatively small cat for the first year. Then she grew. And grew. Now, she's a large cat, even if you discount her pudge.

I might try introducing Jazzy to Nana while she's still confined. Little meet and greets to see how they react to each other. And you might have more to worry about with the little stray than with the dog. Jazzy might've had to run from other dogs out on the street and might be skittish around the dogs for a while. Time will tell. Good luck!
July 2, 2018 at 2:21 AM

Madeline Mora-Summonte said…
Jazzy is definitely one lucky kitten to have found you all! :)

Just another day on the farm said…
Thank you so much for helping this wee one.. the love you will get back will make the pain of skimping worth it!
July 2, 2018 at 4:13 AM

Stacy McKitrick said…
It's been too long since we had a cat and dog together, so I'm no help there. Jazzy is a cutie, though.

Maria Zannini said…
BE; I was comparing him to my neighbor's kitten and mine is so skinny. My vet says with regular feeding and care he'll catch up. She wasn't worried.

Maria Zannini said…
Madeline: If there are other kittens, they never made it to our place. I hope they all found good homes.
July 2, 2018 at 9:19 AM

Maria Zannini said…
Stacy: People always lose their AC during the height of the heat wave too.
July 2, 2018 at 9:23 AM

Jackie Burris said…
RE:"Do you have any recommendations on how to get dogs and cats to get along?" Maria we have always had small lap dogs so introducing them to a cat was actually easier because the dogs were like Iko, curious rather than aggressive. I do not have any real recommendations other than make sure little Jazzy is well protected because he is very easy for either of yours to injure or kill. Which I know you planned on doing anyway. My best advice is of course do not let the cat loose so he can run from either dog as their prey instinct will totally take over without them meaning it to and the kitten will be toast.

Little Jazzy fell into the right human hands but the dogs are of course another story as they were there first and there will of course be "territory issues" forever, possibly.

Glad Miss Nana's healing process is going well and so sorry to hear about the AC because this summer is possibly the worst one we have ever had in my lifetime so far. YAY Texas heat, she is trying her best to teach us Mother Nature is the boss!
July 2, 2018 at 10:08 AM

Maria Zannini said…
Jackie: My goal is to allow him to go in and out as he pleases. The hard one to teach will be Nana. If she sees anything scurrying, she goes supersonic. If I can teach Jazz to move slowly, I think Nana will eventually see him as a fellow housemate.
July 2, 2018 at 11:41 AM

Maria Zannini said…
Jenny: I think I found him at just the right stage of his development. Hunger probably did a lot to encourage trust too. Mealtimes are his favorite times. :D
July 2, 2018 at 3:20 PM

lv2trnscrb said…
Jazzy is so cute! What a story though of how he ended up in your family! Glad to hear Nana is recuperating; ick on the air conditioner, but a necessity in the Texas heat. I am clueless to have dogs and cats mingle together and like each other. Son had a dog and a cat until cat went to live with his step-daughter's dad (whose cat it was anyway but couldn't have it where he was living for a bit). The cat and dog got along relatively okay but the dog came as a puppy about 4 months old, the cat at the time was probably 5 years old. She I think put the puppy in its place a few times and the dog learned how to act around her. Good luck!

Maria Zannini said…
Betty: Some dogs and cats are cool with each other. I suspect Iko will be the easy one, but Nana is a bullet. All she sees is competition for who's the fastest.
July 4, 2018 at 2:38 AM