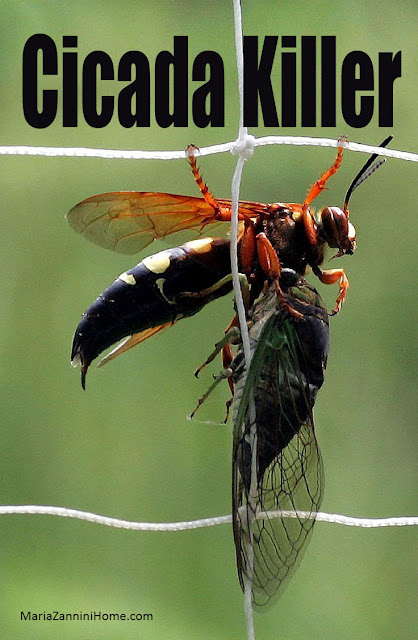 I've lived in Texas for over forty years and this is the first time I've ever come across a cicada killer.

Cicada Killers (Sphecius speciosus) is a wasp that can get up to two inches long. Now I know everything is bigger in Texas which might account for the one Greg found in a 4 inch pipe. He says the body reached from one end of the pipe to the other.

I believe him. It's a little hard not to measure correctly against a known diameter.

A couple of days after he told me this I ran into two more cicada killers. They looked about the size of a hummingbird.

They are huge! And when you see that big stinger you can't help but worry. Thankfully, the cicada killers are so focused on their prey they go out of their way to avoid humans--such as the first one I encountered. He actually went around me.

As their name implies, cicada killers hunt cicadas. They paralyze the cicada take it down into a deep, burrowed tunnel and deposit an egg inside it.

With as many cicadas as we have, August is our most deafening month. A lot of people try to eradicate the wasp, but we let them be. There's enough food for everyone.

What's the biggest insect you've ever seen? Is there anything you're particularly afraid of? My vote is for scorpions, of course.