How To Reboot Damaged Soil After Erosion 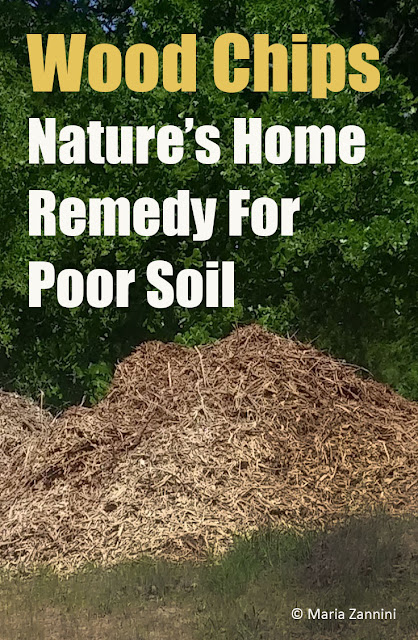 Many years ago I read an article (and subsequent YouTube videos) by a man who claimed he re-energized his spent and nearly sterile soil by using wood chips as compost. Google Back to Eden and you'll see plenty of articles for and against this process.

Wood chips were like a religion to Paul Gautschi and he'd have tree trimming companies bring him chips by the 18 wheeler load. There were mountains of them on his property.

I was fascinated by his success stories.

I think he was right, and wrong. Success depends on a lot of things, most notably, what kind of trees were chipped, if they were infected by any unfavorable bugs, and whether they were harvested from areas that were sprayed by herbicides.

For several years now there's been talk about herbicide spraying affecting the hay we feed to animals. It doesn't so much affect the animal (as far as we know) but the herbicide appears to still be active even after the hay had rotted and composted, subsequently killing off plants if the compost was used in the garden. For this reason I'm also wary about wood chips.

Recently a couple of companies were trimming and chipping the trees along the power lines in our tiny community. I know they're always looking for some place to dump their chips, so we offered to take whatever they could give us.

Unfortunately, quite a few other neighbors had the same idea. Still we managed to score five truck loads.

Since I knew the areas they were trimming had not been sprayed, I felt reasonably sure they were safe. I also knew most of the trees being trimmed were cedar and some deciduous trees.

Cedar is great for keeping ticks and scorpions at bay so I was more than happy to get cedar chips and leaves.

There are pros and cons for using chips in the garden, as opposed to using leaves.

• The wood chips from a walnut tree could kill your sensitive plants.

• Likewise chips from oleander and poison oak are toxic or itchy on contact.

• Well-rotted wood chips make wonderful soil. You just have to be patient.

• A heavy layer of wood chips impedes the growth of weeds.

• Wood chips make for a great ecosystem for microbial and larger life.

Our main use of the wood chips was to repair badly eroded soil. For years, we rode our tractors, ATVs, and golf carts over trails on our property until the roads became desert-like. With the top layer rubbed off and left to erode, it couldn't hold onto its fragile life and we were left with sand.

During a hard rain, parts of the road would become impassable. We had to do something.

I had been looking into expensive fabric that supposedly kept the soil from deteriorating. I also looked into buying gravel or new soil--both astonishingly expensive fixes.

I wanted my trails back the way they were when we bought our home. We still drive our vehicles, but now we limit the trails to only two paths in out of the way locations. All our trails are being treated with a layer of wood mulch.

On two separate occasions, Greg and I spotted a chipper/shredder truck not a quarter mile from our home and we asked the drivers if they needed a place to dump their loads.

At the time I still wasn't sold on whether these chips would help the garden, but there was no harm in spreading them over the eroding soil of our vehicle paths.

After our first hard rain, I realized what a godsend it was. It worked! Not only were we able to drive over that area, I could walk on it without losing a shoe in the process.

Best of all, it was all FREE.

My next experiment was to use it as weed barrier inside my raised garden. Part of the garden was already paved with thick rubber mats, the kind used in horse stalls. But it proved too expensive to do the entire 30' x 60' garden, so I used the chips to line the smaller corridors.

I'd rather have the rubber mat because it's easier to walk on, but you can't beat the price of free wood chips.

In the end, we used up every bit of the five loads we'd been given, and now I'm looking for more.

I'm not sure I would use those wood chips directly on the garden beds unless they were only spread on the surface so as not to change the soil chemistry too much. Since I ran out, it's a moot point, but it's an experiment I'm willing to try on a couple of beds if more chips become available. 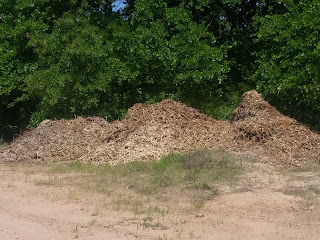 Wood chips are also phenomenal for orchards, just don't put the chips directly against the trunks of the trees.

For us, it's been an eye opener. The chips are stabilizing my soil. The winds don't blow what's left of my soil either.

It was the one stroke of good luck we've had this year. I hope I see those chipper/shredder guys next year.

Many of the big box stores sell wood chips by the bag. Every spring and fall, people buy them by the pallet load. We did too, but I only tried it once because I was never happy with it. All this mulch is artificially colored, and the color fades in a matter of weeks. It makes me wonder what type of chemicals leached into my soil.

The free wood chips on the other hands are neither small or uniform, but there's less worry about chemicals.

Do you use wood chips on your property? What's been your experience? Have you ever flagged down tree trimmers and begged them for their chips? :)

Michael Keyton said…
Great article, Maria. I love tips like cedar wood deters scorpions - though admittedly not a problem in Wales. I rake and bag my leaves, wait a year or two and add the result to my veg plot. Been wary of adding it to my roses because I'm ignorant and am a little afraid of fungal or related diseases.
September 29, 2018 at 2:13 AM

Maria Zannini said…
Good job, Mike. I'll never forget the revelation of beautifully composted leaves. I could kick myself for getting rid of them years earlier.
September 29, 2018 at 3:05 PM