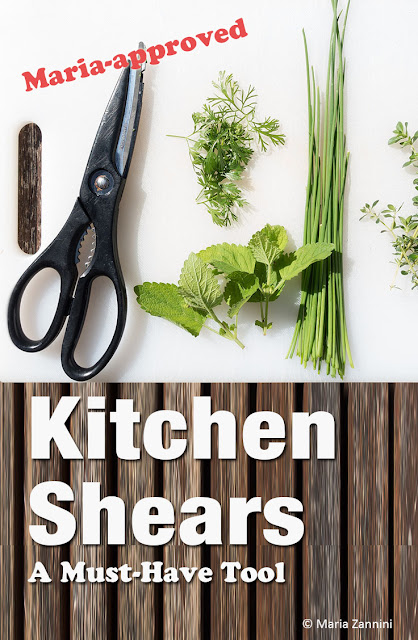 This is a Maria-approved product.

Kitchen shears are my go-to tool in the kitchen. I use it for everything, especially for jobs that require precise cutting on uncertain terrain--like bony chicken backs.

For years, I struggled to cut out the spines on chickens. I used to roast my chickens whole, but now I spatchcock my chicken. Spatchcocking means to butterfly the chicken by removing the spine. This way the chicken lies flat in the roaster.

If you've never tried butterflying your chicken, prepared to be amazed on how much better and evenly it cooks. Since spatchcocking, my chicken is moist without sacrificing cooking time on either breast or thighs.

This is the long way around on why I bought poultry (kitchen) shears in the first place. After donating too much blood on a chicken job, I bought a pair of kitchen shears. I made a poor choice and had to work hard to cut bone with those shears. Still, it was easier than a knife so I bought another pair, one that was better quality.

It worked! It cuts through my chicken with hardly any effort on my part.

From there, I started using them to snip herbs, cut meat into even slices, chop dried fruit or fresh vegetables, and even for pizza. I especially like it for pizza. I hold one end with a pair of tongs, and cut the pizza with the shears in my other hand.

If you don't already have a pair of kitchen shears, get some. If you cook at all, you'll find yourself using this tool a lot more than you think.

And here's a little trivia for you. If you decide to give these as a gift, always include a penny taped to the box. It's bad luck to give knives or scissors to a friend because it portends your ties with them will sever. You can easily break the curse by including a coin that the recipient will then give back to you. In effect, your gift was "bought" and the curse becomes null and void. Ha! Who knew?

I've always heard giving anything sharp is bad luck or at the very least impolite, but I never knew why until I looked it up. That doesn't mean you can't buy yourself something nice! Unlike most kitchen tools this one is relatively inexpensive.

Trust me, once you start using kitchen shears, you'll love them, especially if you have arthritis in your hands.

Have you ever given a gift of anything sharp to a friend?

Stacy McKitrick said…
I gave a set of knives to my friend for Christmas. Then again, she told me exactly what to get (when I asked her what she wanted). I like it when friends make it easy!! :)
October 3, 2018 at 4:24 AM

Maria Zannini said…
Stacy: I need more friends who tell me what they want for Christmas!
October 3, 2018 at 9:56 AM

Gwen Gardner said…
I don’t have any kitchen shears, but now I want a pair. Lol. Interesting tidbit about giving sharp gifts. I think I’ve heard that before, a long time ago. I’ll remember now that you’ve reminded me :)
October 3, 2018 at 2:21 PM

Maria Zannini said…
Gwen: Honestly, I'm sorry it took me so long to use them. They've really made my life easier.
PS If you do decide to buy a pair (or anything from Amazon for that matter) use any of my Amazon links. You don't have to buy what I posted, but they give me credit if you click from my posted links.
October 3, 2018 at 2:37 PM

Michael Keyton said…
'Spatchcocking means to butterfly the chicken by removing the spine.' Can't help it. I'm getting Hannibal Lector vibes here. Out of interest, which of the three scissor recommendations you have listed is your favourite?
October 4, 2018 at 10:26 AM

Maria Zannini said…
The one I bought isn't sold anymore, but the Mairico looks almost identical to the one I have. I use them all the time.
October 4, 2018 at 4:27 PM