Giving In To Cravings 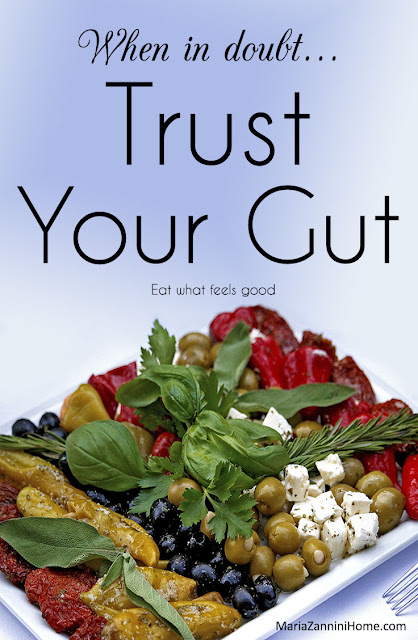 What do you do when you don't feel like cooking? Even though I write out a meal plan every week, sometimes I just don't want to go through the motions.

Other times nothing sounds particularly enticing even if I was offered a night out on the town.

This happened to me recently. We had leftovers in the fridge, but I didn't feel like eating leftovers and I wasn't in the mood to cook or try something new. I was in food limbo.

If Greg is in a food rut all I have to do is try a new recipe. He's easy to distract. But what if you're the head cook and bottle washer? Who pulls you out of limbo?

I've found that on those rare occasions when nothing seems to whet my appetite, I trust my gut--literally.

If I have a taste for something salty, I opt for seafood or Asian. If I want something warm and comforting, my gut is asking for bread or pasta. Something sweet? Pancakes, dessert for dinner, or more bread.

If it's none of the above, it means I'm craving vegetables. That makes it kind of hard for me because while Greg will eat his veggies, he won't willingly eat an entire vegetarian meal. That means cooking two meals. And that's kind of a deal breaker if I'm the one who has to cook.

On days like this I give Greg two options. He can either cook for himself or we do smorgasbord. It can be an assortment of cheeses, a veggie tray, crackers, pickles, smoked oysters, and sardines. From the freezer, there's always pizza, egg rolls, and sausages.

I'm still forced to make my own meal if I want vegetarian, but at least he can fend for himself with whatever we have on hand.

Some nights, especially when we've worked nonstop and forced into a late breakfast or lunch, we go for nothing more taxing than popcorn or trail mix.

I stick pretty close to my meal plan every week, but sometimes I'm tired, or I've had a busy week. I'm not above telling Greg he's on his own for dinner. He's a good sport about it, though I've noticed that if I'm not cooking for him he de-evolves into a caveman and eats out of a can. (Grosses me out.)

Bottom line: Trust your cravings even if they sound bizarre. You don't have to be pregnant to give in to something out of the ordinary.

So what do you do when nothing in particular strikes your fancy? Do you eat out? Raid the pantry? Or let someone else decide? Do you listen to your gut when it wants something weird for dinner? Does your significant other ever de-evolve into something prehistoric?

If you or yours were ever pregnant, were there food cravings?

Carole West said…
When pregnant it was watermelon and strawberries. Healthy sweets seem to catch my attention. Now days I crave things like fresh herbs mixed with just about anything. However this week i took a spin and stuck with grilled cheese and roast beef on a tortilla. Weird yes!

Maria Zannini said…
Carole: If you're going to have cravings, those were good ones. :)

re: grilled cheese and roast beef on tortillas
Those are a favorite in this house. Greg always asks for them if we have leftover steak around.
November 5, 2018 at 2:20 AM

marlenedotterer said…
I don't understand the "two meals" thing. I cook a vegetarian meal and if Rick wants meat, I just throw a piece of meat or fish in a pan and give it to him with the rest of the meal. Why must there be two separate meals made?
November 5, 2018 at 3:05 AM

Stacy McKitrick said…
It's getting to that time of year where I don't mind cooking every once in awhile. I've got a hankering for my mac & cheese and I was in the mood for spaghetti & meatballs so I cooked that last week, so I guess I DO go with my gut. Haha!
November 5, 2018 at 3:18 AM

Maria Zannini said…
Marlene: That's fine for stir frys but for slower cooked food like goulashes or soups if I include meat in those recipes they have to stew for quite a while.
November 5, 2018 at 3:31 AM

Maria Zannini said…
Stacy: The fall does that to us, I think. We get all homey and nest like. I know I cook a lot more in cooler weather than I do in the heat.
November 5, 2018 at 3:32 AM

lynnviehl said…
When I don't feel like cooking I make sandwiches and/or soup; I've always got the fixings for those. My homemade French onion soup and grilled roast beef and swiss sandwiches are my guy's favorite quick meal. I prefer leftover rotisserie chicken sandwiches and Lipton noodle soup. If all else fails I'll make breakfast for dinner (scrambled eggs, turkey sausage and whole wheat toast) which takes about five minutes.

I try to plan meals during the week so that I'm not cooking every day. That more than anything keeps me from getting bored or burned out in the kitchen. Leftovers help a lot. Also, my guy doesn't mind grilling so I have him grill something at least once a week. If I'm very busy with work and put him in charge of dinner he usually goes the easiest route (take-out subs) so I don't do that often.

I didn't have many pregnancy cravings but I remember always wanting fresh peaches with my daughter. I think I ate a bushel of them before she was born. :)
November 5, 2018 at 11:17 PM

Maria Zannini said…
Lynn: I could probably live on soup. There are so many varieties.

re: pregnancy
I find pregnancy cravings fascinating. I want to know why the body wants what it wants.
November 6, 2018 at 4:01 AM

Michael Keyton said…
I follow my gut. I'm a good listener.
Ref 'he de-evolves into a caveman and eats out of a can.' Now may be the time to share my hidden vice. I love cold Heinz baked beans spooned from the can. I always try to hid the evidence, - the tomatoey mouth and the can.
November 11, 2018 at 2:44 AM