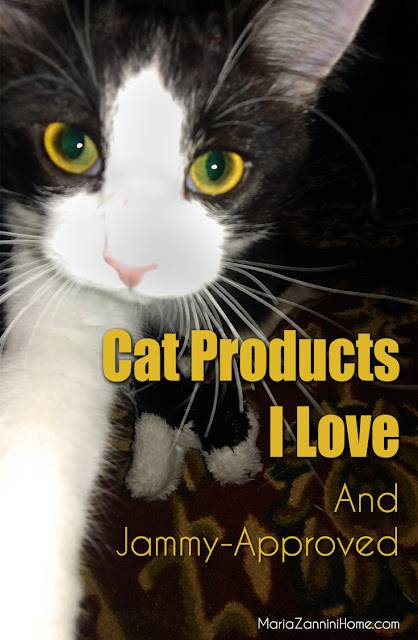 Jammy, our foundling kitten from last summer has turned into a handsome boy. He was called Jazz in the beginning, but it was clear he was more of a Jammy.

When he was little, his speckled fur feathered out at the edges. It made him look like he was wearing woolly pajamas.

As my experts predicted, once he recovered from malnutrition, his fur began to fill in and darken. He was such a little skeleton when we found him. I was very worried he wouldn't make it.

It'd been 30 years since we'd had a cat in the house. Some doctrine on cat care has changed. Back then, vets said you should only feed dry kibble. Today, they recommend wet and dry. Jammy likes to supplement his meals with grubs and grasshoppers. You cannot pry a grasshopper out of his mouth. He eats them like candy! I guess old habits die hard.

I feed Jammy wet food in the morning and a bowl of dry kibble that he can nosh on during the day. I used to feed him the Costco brand, called Nature's Domain, but I've since switched him to Rachel Ray's Nutrish Cat Food because of the omission of grain cereals.

For wet foods, we go all over the place. I've always cooked for the dogs so Jammy gets what Nana gets. This is usually chicken or liver. When I opt for canned cat food, he gets the best quality I can afford.

Unfortunately that might've come back to haunt me. I got him some high end cat food from a lady at a garage sale. Her cat had died and she had all this cat food left over. He LOVES this stuff. You cannot pull him away from the bowl when this food is served.

His favorite is Merrick's Purrfect Bistro. But he also loves Castor & Pollux Pristine cat food, and Soulistic. I've since tried feeding him the hum-drum wet foods of the hoi polloi. He'll eat them, but grudgingly. He wants the primo stuff.

Whatever he eats, it seems to have done him good. He's at a perfect weight and has become the light of my life. That little guy pulled me out of some pretty dark places, especially when Iko was recovering from his surgery, and subsequently after he died.

No matter where Jammy was when I went to bed at night, I always found him nestled under my arm when I woke up in the morning. He's been a comfort to me in ways he'll never know.

That went for me too. Since I'm chief pet-poop picker-upper I wanted products that would make my job easier.

Although Jammy will relieve himself outside in the secure dog run, if it's raining or cold, he'll use the litter box. It took me a while to find cat litter with a nice scent that did a good job trapping liquids.

The best I've found is Scoop Away. This is great stuff. The perfume is tolerable and it does an excellent job at keeping the waste intact and absorbed. I've tried quite a few other litters, but this has definitely been the most efficient.

My other great find was an aluminum cat litter scoop by DuraScoop. I almost sent it back when I got it because I thought it was too big. (It's meant for a multi-cat household.)

But when I tried it, I was sold. It is ergonomically designed so that even these arthritic hands found it easy to scoop. And unlike the flimsy plastic scoops, this one is solidly built. It feels perfectly balanced and strong enough so that you don't have to push too hard to pry a stuck piece of damp litter from the bottom. It picks it up effortlessly. I was shocked how nice it was. Definitely worth the money.

It cost me a little over $300 to bring Jammy up to code (neutered and vaccinated). I find his toys at garage sales. His favorites are two baby toys. One is a soft rattle in the shape of a monkey, but his very favorite is a little, bitty stuffed border collie. He carries it around and wrestles with it.

The most expensive consumable is the cat food. Since he had such a rough start in life I want to make sure he gets the best nutrition. So far it's paid off. He is one happy Jammy cat.

Have you ever named one of your pets only to have it change over time? I think all our pets have had at least two names and sometimes more depending on whether they've been good or bad. :)

Angela Brown said…
Glad that things with Jammy have turned out so well. I love the poetic beauty of you finding and saving him and for him to be a source of salvation when some things were getting a little dark in your world.
January 14, 2019 at 2:41 AM

Stacy McKitrick said…
I'm glad Jammy's doing well. He's a real cutie, too. As for re-naming... I haven't done that. Almost did. When we got our last dog, he came with a name: Mojo. I did not like that name (and it didn't fit). I said he looked more like a Barney and everyone agreed. Maybe if I had waited a week, I'd have named him Shadow instead (because that's what he was to me), but by that time the name Barney had definitely stuck. I still miss that dog (and it's been 17 years).
January 14, 2019 at 7:05 AM

Marianne said…
I agree about ScoopAway. I actually used unscented, but it's by far the best scooping litter I've ever used. In a pinch, I'll use FreshStep, but I prefer not to. The lady who gifted you that food was definitely buying top of the line! Wow! I have to buy that kind of food for Dorothy because of her massive skin allergies, but it's still hard to stomach the cost.

Maria Zannini said…
Linda: :shakes head: Nana has gotten drunk on the extra attention. She didn't even have the decency to mourn like she did for Tank.

Ironically, her courage fled with Iko. Apparently, he was the one that made her feel protected. Since he's been gone she's become much more skittish and cowardly.
January 14, 2019 at 7:53 AM

Maria Zannini said…
Marianne: Brandy said (on Facebook) that Costco puts Scoop Away on sale 3x a year. I'm going to have to look for the unscented. I'd much prefer an unscented variety.

re: wet food
I'm afraid when that food runs out, he'll have to settle for the regular stuff. I ended up with a huge box load but I hand it out sparingly between the regular 'poor cat' food.

Just another day on the farm said…
hi, I am so glad he is doing well, such a nice update on him growing up, I often have formal names and then call names and then nicknames example Rhea is Dezzy formal name, she mostly Dezbot, or dez or Dezzy..or the bot.. or Dezdemona or if she is getting her really long name. Dezdemona B. Bot lol
January 14, 2019 at 8:23 AM

Maria Zannini said…
FarmGal: Everyone around here knows that if I add our last name, that means they're in trouble. :D

Marianne said…
Unscented cat litter is HARD to find. I usually get mine at Target. Sometimes at Petco. I've never found unscented at the warehouse clubs, probably because most folks prefer the scented kind. It gives me a headache (and if it bothers ME that much, how much more must it bother a critter was significantly sharper smell?).
January 14, 2019 at 11:12 AM

Maria Zannini said…
Marianne: I don't like perfumed stuff. It gives me a headache too. When I clean the litter box I take a big breath of air before I go in so I don't suck in that perfume.

Michael Keyton said…
Still miss my kitten forty or so years on. Gladstone was and remains the perfect name. But glad that Jammy arrived in your life, Maria.
January 20, 2019 at 11:43 PM

Maria Zannini said…
Mike: I guess you must travel too much to have pets now.