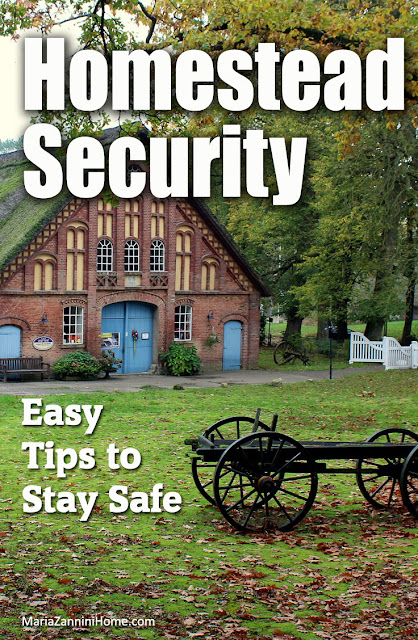 For me...
All these moments are tiny scenarios on what could happen, what has happened, or what will happen to you or yours at some point.

It doesn't matter if you live in a studio apartment or a McMansion; whether you live in the city or the country; danger is everywhere.

After what happened to our poor Iko, we redoubled our efforts to secure our homestead. We installed cameras all around the house and shop. We plan on adding more by the goats and the road leading to our home. So far the only things we've recorded are marauding deer, though we did see a coyote trot out our driveway with a deer hindquarter.

Something I dislike doing, but have accepted is carrying a gun at dawn or dusk. Where there's prey, there are predators. I just don't want to be one of the former.

So what can you do to stay secure? Here are my best tips to stay safe.

Ring (or other doorbell camera). We bought this last year and LOVE it. It alerts you to whoever comes to the door. Not only is the video camera motion-activated, but you can talk to who's ever at the door from your phone, so they'll never know if you're home or not. Relatively easy to wire.

Even a cat is good at alerting you. I always pay attention if Jammy suddenly sits up and stares at something. He's been especially good at hunting and killing scorpions. That gives him job security for life.

Whatever your environment, nothing beats being aware of your surroundings. That one exercise can save your life.

Have you ever been in a dangerous situation? What security measures do you use in your home?

B.E. Sanderson said…
All excellent suggestions. Personally, I carry pepper spray everywhere I go - even if it's just out in the yard. You never know, ya know? I also maintain situational awareness - basically, be aware of everything all the time. This is especially important when I'm out fishing alone. As is being aware of what's handy to use as a weapon, if necessary. A stick, a rock. If you can grab it, you can hit someone with it. There's a knife in my tackle box, but that's not always easy to get to because I keep the box latched - unless I get a hinky feeling, then I unlatch it and put my knife on top where I can grab it easy. And that's another thing - pay attention to those hinky feelings. Ninety-nine times out of a hundred they're nothing, but that one time...
January 21, 2019 at 1:48 AM

Carole West said…
When you're out in the world I find how you present yourself speaks volumes. Posture is huge and knowing you can attack back to protect yourself is also smart. Carrying a knife or gun is what I do on our land. Our acre is fenced in so even though anything could jump in if they put the effort forward at least it can slow things down.

I miss having a dog,that was a huge help as well. Dixie was an amazing protector and since she has been gone I've come to realize you can't rely on animals to take care of you either. But they are a prefect detour ant.

A self defense class is something all women should take or a year of martial arts. I did that with my daughter and it was a huge also helped build my confidence.
January 21, 2019 at 2:30 AM

re: As is being aware of what’s handy to use as a weapon...
I used to spend a lot of weekends at uni working on my art projects. I always locked the classroom door behind me and kept a knife within reach. Just before I graduated though, a serial killer had murdered a young woman at our university. After that Greg insisted I carry a gun.
January 21, 2019 at 2:50 AM

Maria Zannini said…
Carole: Self defense classes are excellent. Greg and I both took karate when we were younger and I still remember the best moves (for me) to attack or defend.

Just another day on the farm said…
Great post and I am planning on adding in more "eyes" on our homestead as well. I do not go around without the hounds and a little backup on my person.

I have had a few close calls over the years myself and it has certainly taught me to be aware of things around me. Agree.. watch your animals. I feel the same way about listening to your horse when you are out riding or even what they are telling me in the pasture
January 21, 2019 at 3:08 AM

I'm glad you said this. I'm always very aware of my animals. I watch them constantly so I know if their behavior changes even a little. Goats will back up to each other to keep eyes all around them, chickens will suddenly grow quiet, dogs and cats flick their ears to approaching sounds.

Mike Keyton said…
In London I'm aware at all times, walk, as you say, with authority and check out my routes before hand - unless I'm with my daughter who takes me to some very strange places. My guardian angel is called Hinky, and I trust her completely
January 21, 2019 at 5:51 AM

Madeline Mora-Summonte said…
I had heard that about walking with authority and confidence. I also remember being told to hold keys a certain way - sticking out from between your fingers - to use as a makeshift weapon. I grew up in NY and took public transit to and from school so I pretty much did the key thing automatically.
January 21, 2019 at 8:13 AM

Jenny Schwartz said…
Security cameras can record some very strange things! although not coyotes here in Australia ;)
January 21, 2019 at 10:37 AM

Maria Zannini said…
Madeline: Years ago, our college class took a trip to NYC to visit the art museums. I grew up in Chicago so I knew to stay aware and walk fast. My friends looked like deer in headlights. I had to grab one of them by the jacket sleeve before a car hit him.
January 21, 2019 at 10:42 AM

Lisa Lynn said…
I agree...everyone should take self defense classes. But remember not to be over confident and test your skills. It's always better not to need to use them!

To Madeline...I had heard the tip about putting your keys between your fingers too. But my self defense teacher said that can hurt your hand almost as much as your attacker. Instead, hold your keys so you can swing them and use them to strike someone across the face...ideally the eyes. You won't hurt yourself this way.

Some of the best moves are learning how to get out of a hold if someone grabs you from behind. Grab their thumb and yank it backwards.

Don't punch someone in the face, punch them in the windpipe - throat. It will take them down a lot faster.

I carry a pepper spray can in the car that is designed for bear attacks.

ANGELA L BROWN said…
Maintaining an awareness of my surroundings is a big thing for me. When I go to places, I try to see where the nearest exits are, along with my proximity to them.

I use to keep a switchblade in my purse but I broke it using it for a non-knife purpose. I need to get a replacement soon.

Maria Zannini said…
Lisa: My favorite move has always to kick the kneecap from the side. We have no stability from that side. No matter how big someone is, he will drop. If I remember correctly, it only takes 12 pounds of pressure to take the knee out.
January 22, 2019 at 11:50 PM

LD Masterson said…
Um, regarding the benefit of dogs... that kinda depends on the dog. I've had dogs who would greet an intruder with tail wags and kisses, a couple who would run and hide under the bed, and one whose only risk to a bad guy would be if he tripped over the giant sleeping lump. And then there's Sophie who might have noticed an intruder, before she went blind, but wouldn't be much of a alarm system since she never barks. Well, actually, I've heard her let out a couple little "woofs" but she was asleep at the time. I obviously haven't been choosing my furbabies for protection.
January 30, 2019 at 6:22 AM

Maria Zannini said…
Linda: I think all my dogs have been good early warning systems. Not all of them were capable of defending me but they always let me know there was trouble.

They did have a hard time distinguishing the level of threat. A squirrel elicited the same alarm as a real intruder. LOL!
January 30, 2019 at 2:47 PM