Combat Shopping Before A Weather Emergency 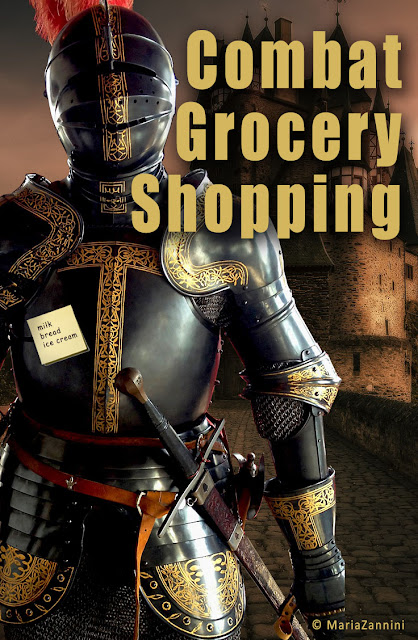 I was reading an article a couple of weeks ago where shoppers in Seattle described their grocery stores as war zones when an impending snow storm was heading their way. Residents descended upon their stores in panicked desperation.

It gets that way before every weather emergency. I remember when we lived on the Gulf Coast, shelves would go empty just before a hurricane. Once, after I moved to north Texas we were affected by severe weather affecting the northern states. The 18 wheelers couldn't get through. Our local Walmart had gone three days without a delivery and their shelves were bare.

It was kind of sobering. You don't realize the depth of our infrastructure until it stops working. Who knew stores could go empty after only three days? We didn't even have a weather emergency, but we were affected by one happening hundreds of miles away.

I've lived through hurricanes where we were completely--and I mean COMPLETELY on our own for weeks. No power, water, or gas. We barely even had a roof. The only thing I really missed was running water. Once that came back, I was a happy camper, even if we didn't have power. It's funny what brings you satisfaction during an emergency.

Empty store shelves though strikes me as a different kind of problem. If you have to stock up on food, it means you run your home on a near empty pantry. That's something that's easily fixed.

I grocery shop every week. Most of my shopping revolves around fresh produce and bread. I don't bake. I could, but it takes me so long that it becomes a headache. I've watched friends bake and it's effortless for them. Me? I overthink everything.

This year, I'm concentrating on using up what's in my pantry and freezer. I still buy things that are on clearance or clearly good buys, but I resist most everything except things we prefer fresh.

I don't have to shop if I don't want to. It's something we choose to do. If we were expecting a weather emergency, we'd buy the same things we'd buy during a non emergency.

Maybe the people who fill their carts to the brim during an emergency don't have a pantry. Or maybe it's panic buying in case the emergency lasts longer than anyone expects. It's good to be prepared. Trust me. Sometimes these things do last longer than anticipated. Once a weather emergency strikes, that's it. You're stuck until the roads are clear again.

We've also had what I call 'sickness emergencies'. This is most common with people who live alone or single parents with young children. I once had to force myself to get out of bed and go to the pharmacy for drugs because we didn't have anything for flu symptoms. Greg was in worse shape than me, but somebody had to go. Today, I might call a neighbor to bring us stuff but back then we were too new to have anyone's number.

It's the same situation if we had been without food, although during flu season that might be called a 'soup and tea emergency'. When you're that sick, only soup and tea will help.

Backup Shopping: While I try to be prepared sometimes things happen. Since it's a good 30 minutes to the nearest store, I practice the backup method of shopping.

I try to always stock double of whatever is necessary. Medicine for sure, but also the food we eat regularly. For example, Nyquil is our go-to symptom reliever when we have cold or flu, so I always make sure I have one bottle for use and one in reserve. As soon as the first bottle is empty, I go out and buy a new backup bottle.

Emergency Food: Call it whatever you like but I also keep a stock of non refrigerated food in case we lose power. This includes foods like nuts, chips, bean dip, bread, jelly, tuna fish, and peanut butter. Those little tins of deviled ham and sardines are also good to keep on hand. Think protein and carbs.

If you have electricity, the world is your oyster and you have your choice of anything you can make at home. If you're cooped up at home for any length of time during a weather emergency, stock up on comfort foods. Human beings are funny creatures. We stress out when our norm is disrupted.

During a weather emergency, kids are usually at home, and you may or may not be able to go to work. Bake something. Keep the house warm with big pots of soup or stew, and bread or cookies in the oven. Give everyone a job. Don't shoulder everything alone. A weather emergency is more about emotional support than food. People get cranky being cooped up so the trick is to keep everyone occupied.

A lot of experts say you should keep the kids entertained during a weather emergency. Me being me, I don't believe in entertaining my fellow inmates. I expect them to pitch in and do something useful while we're stuck together in the same cabin. It's good for morale and it's good training for when they have to be on their own.

How's your part of the world right now? Have you faced any weather emergencies this year?

Why do you think people go binge buying before an emergency? Do they really have nothing in reserve, or are they overcompensating, just in case? Maybe they hope to sell the surplus on the black market. Ha!

What do you think?

How do you prepare for a weather (or sickness) emergency? How long can you stay in your home before you have to go shopping?

B.E. Sanderson said…
I went ten days without grocery shopping during the viral outbreak we just got over, but I did make one emergency run in the middle for prescriptions and cigarettes. When I finally got to Wallyworld, the cart was full because we were low on so many things. I mean, we probably could've gone longer - the cupboards weren't bare and the freezer was about half full - but the cat would've been out of canned food and the milk was on its last legs. I'd used the last of the potatoes and carrots to make soup. That sort of thing. Now we're stocked up again and I'm happy. In a pinch, though, we could probably go at least two weeks and we've never had bad enough emergencies to go that long here before. :fingers crossed:

Not sure what's up with other people. Poor planning on their parts? When I see weather stuff coming, I shop a day or two in advance. :shrug:
February 20, 2019 at 1:28 AM

Maria Zannini said…
BE: You can't forget the cat food. The cats would never forgive you. :)

Madeline Mora-Summonte said…
I would say we're somewhat prepared, but we could do better. We usually have some items/extras in the pantry anyway - granola bars, peanut butter, etc - but when hurricane season starts, we start to stock up more, before an actual storm is on the way.
February 20, 2019 at 3:21 AM

Carole West said…
Great tips and ideas and I'm thinking it might be time for me to share my journey with no running water. Quite honestly I'd rather have my electricity because I'm figuring out this water thing.

Anyways thinking living off grid completely is in my future. With that being said I'm not one to go shopping before or after a storm because I try to keep a good supply of things year round. Not a hoarder stock but a good supply.

It can be harder to do when living tiny because you really have to break things down into basics and what's important.

lynnviehl said…
I think people wait until the last minute to shop for a weather emergency because they're hoping it won't be so bad. That still happens even here, where everyone knows better. The binge buying is that last minute flip to the other extreme, which is to grab everything before someone else does. Sad, really.

We know better from lifelong experience, so we're always ready. Back in 2004 we lived off our emergency supplies for 21 days with no power, water (well pumps need power to work) or way out to civilization. We could have lasted another month except for water, which ran low because we shared our stores with neighbors who ran out or had none. The only thing we've changed since that awful storm season was to invest in a generator to run the well pump in case that happens again (which it probably will.)

Being good neighbors provides unexpected benefits, too. After Irma hit our genny gave us running hot water for the eight days we went without power. We offered our spare bathroom to neighbors and friends who needed to shower before going to work. We were the only people in the neighborhood with massive tree damage, and while we were cleaning up our neighbors came to help with the heavy lifting -- without us even asking for help. I really felt like we all got closer after that storm.

Maria Zannini said…
Carole: i swear, when you have to live without water, it defines you. You either make it or you break down.

Maria Zannini said…
Lynn: You are so right about emergencies and neighbors. After our last "big" one, it was so gratifying to see how people pulled together. Even big retailers. They did whatever was necessary to get us back on our feet regardless of what it cost them.

You're a good person for offering your bathroom. I know that would be a huge gift in my eyes.

Angela Brown said…
As a single parent of a kid who has had allergies and regular seasonal flare ups with bad allergy and cold symptoms, I keep a mini-pharmacy. I also make sure to shop once a week, usually for fruits and breads because I try to keep us stocked up for a month or two at a time with the non-perishables like toilet tissue and paper towels.

So far, I haven't experienced a lengthy weather-related outage. I've seen how weird it is to go to the store and see the shelves empty. Lots of last minute panic shopping. Thankfully, that's usually when I've decided to stop by the store to grab a random snack item due to a craving, and not real shopping.
February 22, 2019 at 4:44 AM

Maria Zannini said…
Angela: I have a niece and a husband with regular allergies so I've learned the importance of stocking up on antihistamines.

Once you have a known problem it's best to be proactive cuz those things never go away on their own, and might even get worse during an emergency.

LD Masterson said…
I worked for the Red Cross for years and they have some great checklists of food and other essentials to have on hand in case of a weather emergency. Remember to consider preparation when stocking food. Have some foods on hand that don't require cooking, in case you lose power.
February 22, 2019 at 2:33 PM

Leigh said…
People sometimes think that preparedness is some sort of extremist doomsday mentality, but you point out excellent, practical reasons why being prepared is so important. My husband lost his job unexpectedly once, and it took a while before he had paychecks coming in again. I was so glad I had our garden and a well-stocked pantry. It enabled us to use what savings we had for bills instead of groceries and toilet paper.
February 23, 2019 at 2:31 PM

Maria Zannini said…
Leigh: I understand completely. A few months before my husband retired I went into super stock up mode. I could only guess how much money we'd need to live on, so we were very conservative for the first two years. Knowing that I had enough food and supplies for at least the next year gave me great peace of mind.
February 23, 2019 at 2:39 PM