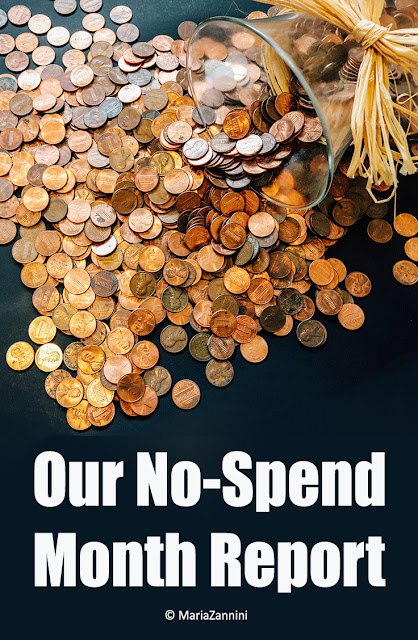 We did it! All of January 2019, we resisted eating out or spending money frivolously. We would've hit it out of the park if it hadn't been for some unforeseen expenses that smacked us hard.

In succession, we got:

Our willpower held when it came to eating out, so we did well in that arena. I was a little disappointed when it came to prescription drugs. Somehow they all came up for refill at the same time.

Gas (for the car) was negligible. We tried to stay home as much as possible, which wasn't hard to do since the weather was  awful in January.

I cooked every day, two and three times a day. I made sure that I always had frozen food defrosting in the fridge several days in advance, so there was always food ready to prepare.

The other thing I did was try new recipes instead of falling into the same old rut. It made eating at home a little more exciting and I think Greg was glad for the changes. We had more soups and casseroles. If I took out a big roast, I cut it up into smaller chunks and tried different ways to prepare them.

Our biggest success was cooking a super moist brisket in the oven (not the smoker) like Greg always had in the past. It was SOOOO good. We liked it so much we cooked another piece of brisket later in the month. That one meat alone lasted for several meals.

Groceries. Can I say how surprised I was at the price of food? We mostly bought fruits, vegetables, and bread, but the prices were sky high. We even bought most of our produce in season but it made no difference. The only items that were reasonable were the few canned goods I got on sale. During the month of January I bought no meat. Meat, poultry, and fish were straight from the freezer.

I did make a good dent in the freezer and pantry. I hope to keep it going a while longer. I've got to make up for that $1500 tooth somewhere. :D

So here's our report card on our No-Spend Month

It's not as good as we did last year, though we did better on groceries because we ate from the pantry/freezer more. If it hadn't been for the $2000 in dental and vet needs, it would've been a cakewalk. Such is life.

We'll likely try another No-Spend Month again later in the year. Once I got into the rhythm it was kind of fun looking up new ways to cook meats and seafood.

I should add that I'm going to continue tracking our spending for the whole year. After seeing last month's bills, I'm seeing leaks in our spending. I was roughing out some numbers and we should have had more saved up by the end of the year than we had. We hardly ever travel, so the leaks have to be coming from somewhere else. I'm on the case and will be investigating!

Where do you think your spending leaks are? Do you save as much as you expect?

Just another day on the farm said…
Hello on this Monday morning, I really enjoyed reading about your month, good for you on doing as well as you did on a number of things and for sharing about the very real things on life.

I agree, the fresh food costs are very high right now.. thank goodness for the freezers and pantry.

That was so kind of your vet to do that.. bless her.

I feel the same way, I am tracking things as well.. I also feel like we have leaks happening and time to tighten that up! Here is finding them and working on the issues!
February 11, 2019 at 1:43 AM

Madeline Mora-Summonte said…
You did great! Some of those expenses weren't in your control, but you were really on top of the ones that were, like eating out. I always find these posts so inspiring. :)
February 11, 2019 at 2:15 AM

lynnviehl said…
Your vet is a sweetheart, that was so kind of her. You did fantastic controlling the spending, too, considering all the surprise expenses.

I've had one less-spending success so far this year. We visit our college kid once a week, and last year we generally took her out to dinner as a treat. But the crowded restaurants and city prices didn't make me happy. We were spending way too much. I also wanted to encourage my daughter to cook at home rather than get take out or prepared foods.

I suggested making dinner for her at her place when we visit, an idea she loved (she actually misses my cooking.) So we ditched going out and started eating in, and we're all much happier. I get to work with her in the kitchen and teach her a few more things. We don't have to wait an hour to get a table or deal with meals that are skimpy or badly made. Of course it saves a ton of money, too. I can make up to five meals on what we were spending on one at the restaurants.

I think it's also changing how she's spending. She's definitely cooking more at home and trying new recipes versus getting fast food. This week she asked to make dinner for us for the first time, and cooked up a delicious stew in the new Instapot her boyfriend gave her for Christmas.
February 11, 2019 at 2:58 AM

Maria Zannini said…
Farmgal: Oh, good. Another tracker. :) I think it's good to take a serious look at where money is going at least every few years. We get lax over time.

I'm noticing now that I always ask myself if I really need or want an item before I put it in the cart. Many times it's the small things that derail us.

Maria Zannini said…
Madeline: I treat expenses like I do my time. I try to get my most time consuming chores done first because you never know when an emergency will strike and disrupt your plans. If the hard stuff is done first, you don't feel so bad when the little things get set back.
February 11, 2019 at 3:48 AM

Maria Zannini said…
Lynn: Great idea getting your daughter started on cooking for herself. I love my Instapot. It's my go-to appliance for pot roast, ribs and stews.

I don't know that we ever stop learning. Even at my age, whenever my mother comes to visit, she always teaches me some new recipe or reminds me of a very old recipe.
February 11, 2019 at 3:52 AM

ANGELA L BROWN said…
Doing the No Spending month made me realize that I didn't really pay true attention to how much I was randomly spending money for events and donations to my daughter's private school. And because we were eating out less, we spend less on that part, but I became a snack-raving demon and shopped-while-hangry on one occasion (such a bad idea). So we did a tad better than our usual months, but now I understand what I really need to do to save some money.
February 14, 2019 at 12:39 AM

Maria Zannini said…
Angela: That's exactly what a No-Spend Month does. It makes you aware of where the walls are weak.

What you do with that information determines your success.