Tragedy on the Homestead 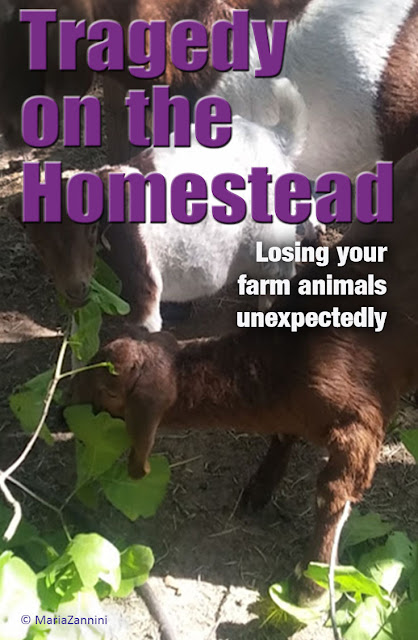 I was sick all last week with a wicked cold. Greg got sick a few days before me so it kind of feels this cold has been with us far too long.

To make things worse, two of our does delivered early. Our experienced mom, Pan, delivered FOUR babies. It's rare but it happens. Not surprisingly with big litters, one of the fetuses went into automatic abortion, pulling the other three babies out early.

My friends, it was awful! The aborted fetus was perfect but still in its amniotic membrane. The other three were alive and trying to get up, but I realized right away that something wasn't right. These poor kids were 12 days early and their chances for survival weren't good.

I warmed them up and got them on their wobbly legs, exercising their muscles and constantly switching from one kid to the next so everyone got his fair share of attention. I made sure each of them received some colostrum from their mother. Within hours the first kid died. She tried so hard, but there wasn't enough in her to keep going.

The second one, also a girl, died two days later. She was the runt of the litter but she had a lot of chutzpah. I think if she hadn't been so little she might've made it. For two days straight, I made sure they nursed every two hours and even supplemented by bottle feeding.

On the third day, only the little buckling was left. He was the biggest--and lazy, as boys are wont to be, but I continued with his physical therapy, working his leg muscles and keeping him warm.

On the fourth day, he started to stand on his own and walked. He was wobbly, but he was walking.

I thought we had been through the worst when Ruby, our red Boer, went into labor. This was when I was at my sickest. Greg was busy so it was all on me. I knew she was having trouble from the start. I tried to explain that to Greg but I don't think he understood how serious it was.

Finally, I made the decision to intervene and try to get that baby out.

I couldn't find the head. I went into her uterus as far as I dared. I felt his lips but I couldn't reach the rest of his head. Both front legs and head should come out at the same time during delivery.

Try as I might, I could not pull the baby out. We either had to shoot her or take her to the vet. I explained the situation to Greg again, as this was now a money question. Greg opted for the vet.

The vet too, couldn't get that baby out. I don't want to speak ill of this vet, but I kind of feel he should've just given up and let us shoot her. We caused her way more misery than was necessary.

In the end, he got the baby out. Despite being in the birth canal for so long, the kid was born alive, but he was so weak. He lived only a few minutes. Worse than that, pulling that baby out tore the doe's intestines. The vet quickly put her down.

It was bad enough losing Ruby and the baby, but I feel horrible about causing undue pain. Some would argue it was a calculated risk letting the vet continue, but they weren't looking at poor Ruby's face. She didn't deserve to suffer like that.

We've never had this sort of tragedy. The vet reminded us that it was a numbers game. Eventually we were going to lose. It just decided to happen all at once.

We still have three more does waiting to drop, which should happen today and tomorrow, their official due dates. Fingers crossed that everything else goes well.

We seem to be followed by a black cloud ever since Iko's death and I for one have had enough tragedy. I hate to be so down on a Monday post, but I wanted to explain why I was absent last week.

What's going on in your world? I hope the Fates have been kinder to you.

(Comments didn't survive the transfer from Wordpress to Blogger, but I read them all. Thank you so much for your empathy my friends.)