Clear Out the Clutter: Spring Cleaning 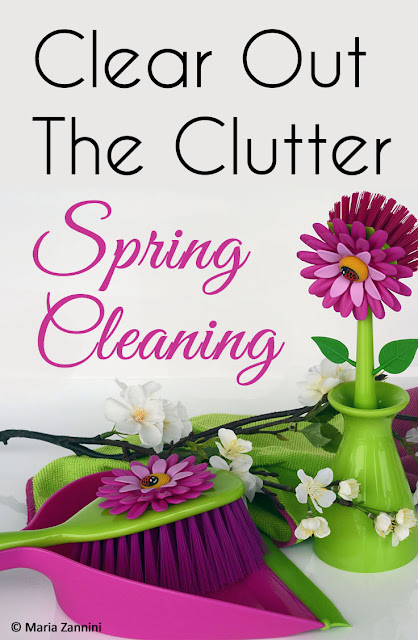 Cleaning is hard when you have a husband underfoot. (Children too.) I have no problem giving them a job to do while I'm hustling from one room to another. Kids seem to do as they're told, but husbands always, grunt, grumble, and act like you've inconvenienced them in some extraordinary way.

For that reason, I have to approach spring cleaning like a military strategist with Greg. He hates to clean.

Recently, we made a slight advancement on his closet shelves. This is where he keeps his socks, underwear and jeans. I emptied each shelf onto the bed and made him scrutinize every item. If the elastic on his underwear or socks were lax, out they went.

His jeans were a little more work. Some were too holey even for work pants. Others didn't fit. The holey ones went to the trash, but the rest went into a donation box.

In the end, we managed to fit his clothes back on the shelves without the aid of a crowbar.

I need to recoop my strength before I make him tackle his hanging clothes. When you live with a man who hates to give up anything, you have to pick your battles.

If you have cooperative children and spouses, clearing the clutter is much easier.

My go-to formula for cleaning is to attack each room individually. If doing an entire room is too much, drill down to manageable bites.

For example, a Bathroom despite its small size can be formidable. Start by emptying drawers.

Kitchens are often over burdened with stuff you probably don't use regularly. I've since relegated my crock pot to the attic. I only use the Instant Pot now. I don't bake often so the big mixer is in a cabinet.

The Keurig has its own corner on the counter. Since Greg uses it daily it needs it's own spot. The same with my toaster oven, which I use more than my big oven.

I don't like my counters cluttered. They get messy enough through daily use, so I only keep out the things I need daily.

Bedrooms are a problem for me. The master bedroom has two big pieces of 'furniture' aside from the bed. The first is an ellipitcal trainer. I almost talked Greg into selling it last year, but he decided to start using it again.

The second is a massage chair. Let me tell you, it's awesome, but it's also huge. I hate that it takes up so much space, but it's the best spot since we like to use it before bed time and watch a little telly.

Bedrooms in my opinion should be restful places. I like soft, serene colors on the wall and a comfy bed. In the end, you should choose what makes you feel safe and rested.

Living Rooms seem to be a catchall for games, electronics, and food. Decide what's important for your family. Our living room is very minimalist. We have a couple of snack trays and side tables, but I try to keep them clear. Greg always looks at me funny, but if I get up off the couch for any reason I scan his snack table to see if he has any wrappers. The more I tidy as I go along the less chance of crumbs. If only I could get him to do the same.

Bonus Room: The FreezerThis week I plan to do an inventory of my freezers. They're empty enough now that I can easily see what I have left. The plan is to pull everything out, see what I have, and then put the oldest food to the front so I can use it up first.

This will inevitably mean some surprise meals, but I've been feeling creative. My goal is to do something different than the usual recipes I use.

I've already started with a leftover piece of French bread I found. I cut it into thin slices and cut out the middle, toasting the bread in a skillet and then frying an egg in each center and topped with shredded cheese. Greg LOVED it. The bread might've been destined for bread crumbs but instead I made a homey breakfast that was a big hit. (I'll post a picture the next time I make this dish.)

Clutter comes in all forms, but don't let it decide your life. If you can't use it, reuse it, or recycle it, it's time to let it go. We are DIYers so we probably have more gadgets and raw material than most people. As long as everything has a place and it's easy to find, I don't have a problem with extra stuff. It's when it's useless and in the way that it becomes an albatross.

Is there one room that gives you more trouble than the others?

Madeline Mora-Summonte said…
I really want to tackle my kitchen - clean out/clean and reorganize the drawers and cabinets. Also, the pantry. And I have got to do something with the weird little alcove in front of the pantry.

Maria Zannini said…
Madeline: I always do the pantry when the weather is uncooperative. I'm interested to see your alcove. I wonder why it was originally put there.
April 22, 2019 at 2:57 AM

Sandra Ulbrich Almazan said…
Our whole house is full of clutter! It felt good to start purging and organizing clothes yesterday. We should declutter the kitchen too.
April 22, 2019 at 4:48 AM

Maria Zannini said…
Sandra: I like doing it in small segments. It's not as overwhelming and it keeps me from making knee jerk decisions on the stuff I'm not sure to discard.
April 22, 2019 at 6:19 AM

Mason Canyon said…
We've been doing a bit of spring cleaning. It's amazing to find out you have 4 or 5 of an item in your kitchen drawers that you never use. We've been keeping a donation box handy for just such items.
April 22, 2019 at 12:52 PM

Maria Zannini said…
Mason: Oh, I know! Sometimes I get mad at myself for having so many duplicates. That's a great idea to keep a box just to toss in the extras as you find them!
April 22, 2019 at 4:03 PM

LD Masterson said…
Hah! I'm actually ahead of you on something. So far this year I've cleaned and re-organized the kitchen cabinets, fridge and freezers, getting rid of out of date food; cleaned out the expired meds from all the bathrooms, and finished a purge of all the bedroom closets and dresser drawers. I won't even admit how many giant trash bags of clothing found their way to our homeless shelter or the boxes of household items that went to Goodwill. Beloved spouse was minimally helpful with his clothes, everything else was easier to do on my own.
April 24, 2019 at 6:03 AM

Maria Zannini said…
Linda: I try to clear the clutter twice a year. Once in the spring and once right before Thanksgiving.
April 24, 2019 at 11:15 AM

Michael Keyton said…
I'm with you 'never leaving a room with an empty hand' (ref biscuit wrappers or anything.) And with Gregg ref socks and underwear. One memorable argument we had involved a pair of underpants fifteen years old, full of holes and missing its elasticity. For me, they did the job and had become an intimate friend. They were comfortable. I said they were good for another year or two (meaning indefinitely) but it was an argument I lost.
April 26, 2019 at 1:23 AM

Lisa Lombardo said…
We have a rather small house, but a huge master bedroom. It's weird. The master was an addition and they didn't really plan the layout very well. There are a lot of windows and door that make it hard to arrange furniture. Because it is so big, alot of things that don't fit anywhere else get dumped in there. I hate it! This summer I am planning to get rid of a ton of stuff and paint our master and do a thorough cleaning. Wish me luck, lol. :) (PS...both my husband and son sound like Greg...it drives me batty sometimes.)
April 28, 2019 at 2:01 AM

Maria Zannini said…
Mike: I probably wouldn't say anything about worn out clothes if he didn't have so much of them.
April 29, 2019 at 2:14 AM

Maria Zannini said…
Lisa: I feel your pain when it comes to husbands. :) Men have a tendency to be completely satisfied with the status quo. I've never understood it. Maybe because they're not the ones keeping it tidy.
April 29, 2019 at 2:17 AM