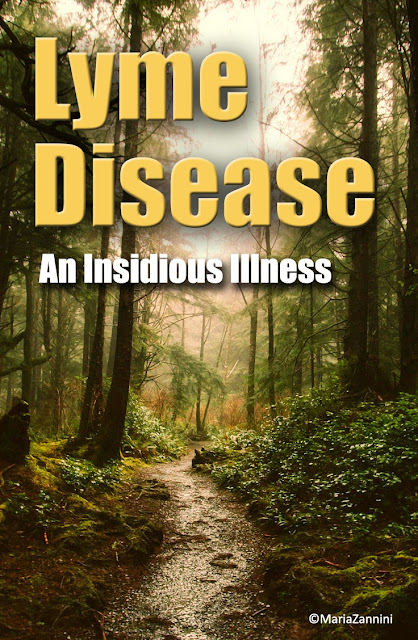 Nearly thirty years ago I came down with Lyme Disease. At the time, not a single doctor was able to diagnose me correctly. I was in the prime of my life, athletic, strong, with stamina to spare. Within a matter of weeks I was incapable of even getting out of bed.

Doctors diagnosed me with everything from rheumatoid arthritis, to MS, to fibromyalgia. They were all wrong. Lyme disease isn't common in Texas. There are some lyme ticks but not to the extent it is in the northeast--which is where I was only two weeks before everything went wrong on me.

It never occurred to me that a single tick bite I got on a camping trip in Wisconsin could lay me out like an invalid. It started with weakness in my joints, severe numbness, and finally headaches so profound, Greg couldn't stop me from crying. I was in so much pain I couldn't think straight.

We went to the emergency room. Then came a slew of tests with no conclusive results. I went to neurological specialists. I had only one anomaly. Apparently both hemispheres of my brain reacted to tests that should only produce results in one hemisphere at a time. I remember the doctor calling in a colleague for a consult. The older man said it was rare but not a symptom of disease. I'm just special that way. I would've laughed if I had felt better.

This went on for months. At one point I was so low I started writing out my will and a letter to Greg so he'd know everything I did for dogs, bills, and household itineraries.

I offered to quit my job, but my lovely boss refused. He gave me an indefinite leave of absence with a promise that my job would wait for me whenever I could get back. I have never seen such generosity since from an employer.

Almost weekly I went back to my regular doctor to let her know that my symptoms were getting worse. She'd prescribe more powerful narcotics and more specialists. Neither helped.

At the end, I was ready to die. I had exhausted all my options. We didn't have the internet back then, but Greg caught something on television about an insidious disease that came from a tick bite. He was shocked when he learned the symptoms. I was suffering from the same things.

We went back to the doctor and asked if this was possible, adding the new information that I had been bitten just before everything got bad. At the time there was no accurate test for Lyme, so she prescribed a much stronger antibiotic.

Slowly. Very slowly. I started getting better and stronger. It was humbling to have been so weak, especially when I had been at my prime. After feeling so poorly for so long, I didn't take anything for granted. I was careful with what I ate and drank. I walked in the fresh air when I could, but as soon as I started getting tired, I rested. I didn't want to jinx it.

Eventually, I went back to work, first for half days and then longer as I felt stronger. It took a long time to believe I was free from that curse.

Since then if I have even an inkling of those same symptoms a cold chill runs down my back.

Two weeks ago, I got bitten by another tick. It wasn't a lyme tick but I did get that telltale circular rash. It was then I decided to see the doc and get antibiotics--just in case. I never want to relive that episode again.

I tell you all this because I want you to take tick bites (or any bite for that matter) seriously. I waited far too long to get treated. There's a chance those symptoms might return later in life. There seems to be some indication that the bacteria can lie dormant, but it's more circumstantial evidence.

Things to know about Lyme

Are ticks a problem where you live? Have you ever been bitten by a tick?

B.E. Sanderson said…
We have mostly Lone Star Ticks here (Lone Star because of a white spot they have in the middle of their backs - not because of Texas). And yeah, they're a problem. Disgusting little bastards, but not Lyme carriers thank goodness. Hubs sprays the yard about three times a year. In fact, since we're supposed to have a dry stretch, he's planning on spraying today. Since he started spraying, we don't have a problem in the yard. Have to watch if i go in the woods, though, or if I'm out and about in nature elsewhere.

Maria Zannini said…
BE: Crap happens. My only regret is that it took them so long to figure out what it was.

Much as I hate freezes, I welcome them to keep the tick, grasshopper, and scorpion populations down.
June 24, 2019 at 2:31 AM

Lisa Lombardo said…
I know two people (a friend and a family member) who both went through something similar. Fortunately they didn't go undiagnosed for such a long time. But they both have relapses and need another round of antibiotics. It seems that it is never really gone once you get it.

Maria Zannini said…
Lisa: Knowing that I could have a relapse haunts me.

Just another day on the farm said…
I currently live in a place that the lime carrying ticks are moving into.. and the reports are getting worse and worse.. now we have signs at our local parks and hiking trails that tell you that proved cases of lime and the ticks are HERE..

15 years ago.. at the vets there would be a red dots for cases in the western part of the province but over the past ten years.. that red as moved towards and then into my area.

I used to check the dogs and cats.. now.. now they are on meds period.. the cost of the blood tests and the meds is not cheap.. and while it is to be monthly.. my vet promises me that I can run my farm cats every 6 weeks but keep the dogs on the 4 week timing..

I am grateful they let me do the bloodwork on the dogs every second year as long as I am faithful on the meds as that saves a good amount of money as well.

As for myself, I do worry about it.. hubby does not.. nothing I say can make him get it.. however he does use the deet bug spray and he sigh's and lets me tick check him regular. Drives me crazy that he does not understand how bad it could be.

As for myself.. I have not to the date as far as I know had it.. I did however test positive for a sheep disease.. its carried by those little vampire blood suckers and can cause nasty stillborns in the ewe's..

If they are bite at the right time.. they develop immune and are fine.. if they are young and get bite at the wrong time in the pregnancy.. it can cause miscarriage and or twisted limbs in the stillborn lambs or the lambs that you will need to put down at birth..

It is passable to us female shepards and we are the same.. we develop a immunity to it.. but if we "catch" it at the wrong time.. we can also miscarry.. They did a small sampling of female sheep farmers in our area and over 80 percent of us, if the sheep flock had it.. we had it..

I know my sheep have it.. the doctor looked at me like I was crazy when I said.. I want tested for it, and I want it in my record.. said.. they had NEVER heard of it.. I pushed and PUSHED until I got it done and on record.

I am so sorry you went though that but I am glad you finally got treatment and I hope you continue to have your health.. its amazing how easy it is to take it for granted until its gone.

Stacy McKitrick said…
Oh my gosh! What a horrible thing to happen! I'm sure ticks are a problem around here. I just don't go out in the woods to find out! A tick did latch on to me once (on my collar bone of all places). I was living in NJ at the time and really hadn't gone anywhere, just around work (which was at the Naval base). Figured it dropped down on me from a tree or something. I thought it was a spider at first, but when I couldn't squish it and it wouldn't come off I asked someone to look at it. Yep, a tick. That person was able to remove it and I took it to doctor (who also checked me over). They tested it and it came back negative for diseases. Whew!
June 24, 2019 at 5:18 AM

Maria Zannini said…
FarmGal: It's scary that it's spreading. I'd feel better if they at least had more accurate tests.
I've got the dog and cat on prevention. They don't travel in the woods, but deer do come very close to the house, so they don't have to go far.

re: husbands
I know about stubborn husbands. LOL. I hope he never has to find out the hard way. It's an awful, awful business.

Maria Zannini said…
Stacy: Even before Lyme disease, I've always hated ticks. Anything that buries itself into your body is nothing short of the devil.
June 24, 2019 at 5:42 AM

Jenny Schwartz said…
What a nightmare! At a minimum it would help if a simple blood test could identify it. Glad you recovered and it hasn't recurred. There's a tick borne disease in eastern Australia where people bitten can't eat meat. Horrible allergic reaction to red meat.
June 24, 2019 at 12:41 PM

Maria Zannini said…
Jenny: We live in a very strange world. I wouldn't be happy about being allergic to meat, but it's better than living with horrible pain.

When I was six to nine years old we lived in a low lying area of Virginia close to a lake. It was a bug haven. Before we could take baths at night, Mom would have to run the water to wash the centipedes back down the drain they'd crawled out of. Ticks were plentiful. I don't know what kind - I only remember them as being small and black - but I do remember stripping down every night in the bathroom and standing on the toilet lid, turning slowly while Mom searched for and removed the ticks I'd picked up playing outside. I guess I was just lucky I never got bitten by the wrong kind.
June 27, 2019 at 4:10 PM

Maria Zannini said…
Linda: I wouldn't wish that on anyone. It was a living nightmare.

I can't say I'd enjoy living in that part of Virginia during that time either. LOL. I think about all the bugs I've encountered. I seem to spend most of my time trying to keep them out of my house. They always find a way.
June 28, 2019 at 2:17 AM

Michael Keyton said…
Gosh, I missed this. Frightening stuff - and yes, we have it over here, too. In some areas. General advice is to wear long sleeves and socks over jeans in those areas where it is prevalent.
July 12, 2019 at 12:57 AM