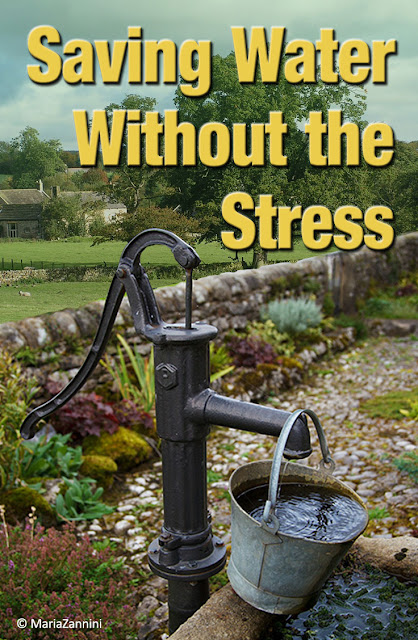 Except for two years when we went through a drought, we don't worry too much about water. Still, I don't like to waste it either. Water is expensive almost everywhere, except those few lucky places that get substantial rainfall.

When we lived in east Texas, it was easier to count the days when you didn't get rain. In north Texas, we're drier, though you can't tell that from this year. We've had more rain than usual. I wouldn't mind more years like this, but I know it's just a fluke. It's never the same from year to year. I keep track!

Still, when we first moved to north Texas, we got a rude awakening with how much drier it was here. Water was more expensive than our electric bill at times. And still my plants died. For this reason we got proactive on saving water and using it wisely.

These are some of the things we practice regularly.

• It was hit or miss, but we finally figured out the best way to water the garden. We use drip irrigation. It's a little costly to start, but once it's done, it's good for years. Water stays near the roots instead of hitting the plant.

I promise you, we tried EVERY method for watering the lawn and garden. Sprinklers were best for the lawn, but drip irrigation did the best job for the garden. It was a costly learning experience. That's why I tell people up front to save their money (and their backs) and put in drip irrigation.

• Never throw out the water you've used in cooking. I let mine cool than water my plants with it.

• Never run the dishwasher or the clothes washer unless it's full.

• Rain barrels. If you live in a dry climate, it's never more important than now.

• Shave while you're in the shower. (That's a tip from Greg.)

• Limit your shower time...or shower with a friend. ;)

• Don't give grass a close shave. Let it grow a little longer during the summer. The longer blades of grass retain moisture and protect it during the hottest part of the year.

• Another tip about mowing. Leave the cut grass on the lawn. It protects the grass and feeds it at the same time.

• Use mulch in your garden. It keeps the ground from drying out too quickly.

• Look for leaks both inside and out.

• Make sure your sprinklers are hitting their targets. Sidewalks and walkways don't need to be watered.

I can't tell you how many years we've spent doing trial and error for the most efficient way to water. It was a real learning curve because we came from an area where it rained all the time. Greg likes to say that in east Texas, all you have to do is throw the seed on the ground. It'll sprout.

What do you do to save on your water bill? Does it rain much where you live?

LD Masterson said…
Nothing will give you a crash course in water conservation like not having any, which was our situation for several days after the Memorial Day tornados. Outside watering wasn't a problem since the storms also brought tons of rain, but it was an eye-opener how many ways we use water all day without thinking about it.
Conservation is important, and not just to save money. Thanks for the excellent tips.
June 10, 2019 at 3:29 AM

Stacy McKitrick said…
It's been pretty wet here this year. Still surprised at how mild it still is, too. Blame the clouds and rain, I suppose. I'm not complaining. I was afraid we'd go straight from winter to summer. I'm enjoying this inbetween weather (mid 70s to low 80s). And the humidity isn't unbearable (even with the rain!). Just hope the storms stay away. Too much water is not a good thing, either.
June 10, 2019 at 7:10 AM

Maria Zannini said…
re: Nothing will give you a crash course in water conservation like not having any...

Absolutely! I learned to be part camel when we lost all our utilities after a hurricane. We take so much for granted.
June 10, 2019 at 8:03 AM

Jenny Schwartz said…
Excellent tips! So much of Australia is drying out. For instance, Sydney is in drought. It changes your lifestyle. When I was little, people would use a hose to wash clean their footpaths! Now, it's broom or outdoor hoover or leave it.
June 11, 2019 at 12:29 PM

Maria Zannini said…
Jenny: I remember my grandmother hosing down her stone path leading to the house, but like you, I doubt anyone does that now. It does change your lifestyle and in only a few decades.
June 12, 2019 at 1:40 AM

Michael Keyton said…
Wales is awash with water. Sometimes we have sunshine. In the S E of England however we often have drought conditions partly from too many people and immigration chasing limited rain. The powers that be are universalising the S E experience and talking of compulsory water meters. In the interests of saving the planet of course.
June 14, 2019 at 4:24 AM

Maria Zannini said…
Mike: I'm surprised the UK has any drought conditions. I always hear stories about how wet it is out there.

We once lived in a suburb that wanted us to limit our water usage in the summer. Hard to do when everything is baking though. This year we've had more rain than usual so I guess they took rationing off the table.
June 15, 2019 at 11:30 AM