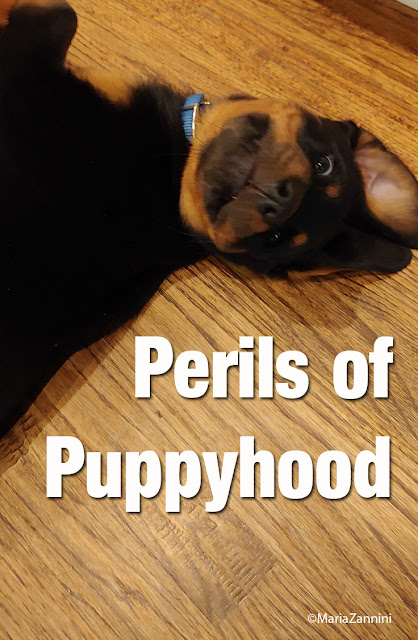 Odin is about 11 weeks old now. Like all puppies he's a handful. He's just now realized he got stuck in a house with old people. Poor puppy. He's adjusting. :)

We've had him now just a little more than three weeks. Potty training has been the most trying for all parties concerned, but unless he's trapped away from the doggie door, no more accidents. He knows to go outside when he has to potty. It was really only a week of accidents but it felt like a year--at least to me.

His weight has gone from 12 pounds to 22 pounds. He always looks skinny though because he's growing so fast.

There's only been one down side. Nana, the border collie. We knew she disliked other dogs, but she's always been gentle with baby animals in general. That's how Jammy, the cat got accepted.

In a perfect world, we would've rather adopted a senior dog, but Nana is Thanos in dog drag.

Nana is uncharacteristically kind with baby goats, chicks, bunnies and even kittens. So we had hoped that would apply to puppies.

Odin adores her, so much so, that he swoons over her like a lovesick schoolboy. Nana is not impressed. She became violent with him when he got too playful and her tooth actually broke his skin. He ended up with an infection, but he healed quickly. She scared him more than anything else. Unfortunately, puppies have short memories and he's longing for her again.

We had a heart to heart talk with our vet. She gave us the name of a respected behaviorist. We're friends with our vet so after she did her duty, I asked her point blank: Will it really help, or are we wasting our money?

She said with rigorous effort we might be able to retrain Nana, but if something in our environment deviates even an iota she could snap and go right back into attack mode. This was my assessment too. When she said it, it confirmed what I had suspected all along.

For as long as Nana is alive, we'll have to keep her separate from Odin unless we're both in the room to supervise.

She truly is very sweet to me and Greg, but she's driven by some insane desire to be the center of attention and she'll fight anyone who takes it from her. She even goes out of her way to destroy HIS toys. I'm in desperate need of more bulletproof toys. I think I might buy one extra tough toy for Nana to see if that helps.

The up side is that Odin is absolutely unaffected. He loves everyone. His puppy training is also going along as scheduled. He knows mom is the one who feeds him and takes care of bo-bos, and dad is the one to go to for a game of fetch or hide and seek.

The commands he knows right now are:

And #Where's monkey. That's monkey in his mouth. 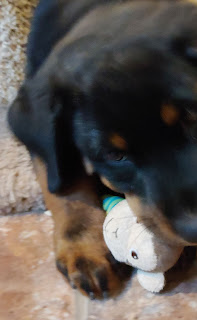 His leash training is going well. When he gets a tad older we'll start on heel and stay. Right now he's got more energy than a squirrel on meth. The good news is he tuckers out fast too.

Surprisingly Nana was not this rowdy when she was a puppy. Her entire focus was to make sure Mom was never out of her sight. Odin is more about--will that fit in my mouth? Boys! Iko was the same way.

It's my hope in time we'll be able to leave the two of them together, but that might not be for a couple of years. We'll just have to wait and see.

We've been sleep deprived because, well, puppy. He eats constantly. Poops constantly. And tries to put the moves on Nana...constantly. It's an endless game of what the heck is that puppy up to now?

Then there's bigger danger too. Recently, a neighbor lost her beagle to a coyote, which makes us even more vigilant. Odin doesn't go out in the run unless we're watching. (Coyotes can easily jump fences.) When we walk outside, he's on leash. If it's dusk or darker, Greg goes armed. We're not taking any chances.

One night, we were walking Odin when we first got him. No leash because we didn't yet have a collar for him. All of a sudden we heard rustling in the woods coming toward us. I scooped the puppy up and Greg drew his gun. I went back to the safety of our gated front patio. Greg stayed out there a few more minutes to make sure whatever it was didn't get closer then we went inside.

We just have to keep him alive until he's no longer meal size. Puppies are a lot of work.

B.E. Sanderson said…
Oh no. I hope Nana gets over it soon. There's a show on called Dog: Impossible where he helps dogs over certain problems - aggression being a big one. It might have some ideas on how to get Nana over her issues. (Yeah, they say 'don't try this at home', but some of it seems pretty simple.) Good luck!

jacabur1 said…
Maria, poor Nana and poor Odin as well. You and Greg too of course but think of this, Nana did not get to be the Alpha/Only dog for long and she is resentful or mentally feels hurt by that too.

Your baby is lucky however as his pet parents are probably the best pick for him to grow up healthy and strong as can be.

If you are Greg do not lose your minds trying to control the two so all out war does not take place right in front of you first. LOL

Beautiful little boy who def will not stay so little for long and glad that his grasp of potty concept made it sooner than later, now if only those outside critters would leave him be life would be smoother in one area anyway.
November 4, 2019 at 1:44 AM

Maria Zannini said…
BE: I might see if it's on Youtube. We don't get Dog: Impossible on our channels.

Nana is no dummy so I'm hoping once the puppy gets out of the 'jumping in your face' stage that things will calm down. Fingers crossed.
November 4, 2019 at 2:58 AM

Maria Zannini said…
Jackie: I don't think it hurt that Iko was so laid back. He didn't care who was in charge as long as he got fed. :)

Stacy McKitrick said…
Odin is a cutie! I hope things calm down for you eventually.
November 4, 2019 at 3:48 AM

Just another day on the farm said…
what a;lovely pup., they are a lot of work at that stage for sure.. hope your girl settles some sooner then later..
November 5, 2019 at 12:40 AM

LD Masterson said…
I remember when Nana was a puppy, challenging Tank and Iko for a space on the bed in your office. Hope things ease up between her and Odin. And when you get Odin's command list up to #bring me a snack and give me a footrub, call me. I'll be right down.
November 5, 2019 at 7:07 AM

Maria Zannini said…
Linda: He's a belligerent little cuss when he knows food is being divvied up. He doesn't yet know about people food, but God help you if you're late with his dog food. He knows when it's meal time.

re: foot rubs
You know who's really good at rubbing is Jammy the cat. Every night he works on this little knot I have on my shoulder. I like the purring too. :)
November 5, 2019 at 9:14 AM