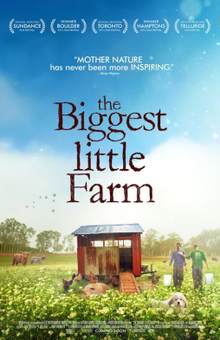 I'd had this documentary on my radar for a number of months over at Amazon Prime. Every time I clicked on it it was always $5.99, far too much for a documentary. Still it was about starting a farm and it was because of a dog, so the film kept gnawing on me to rent.

The Biggest Little Farm is about a couple (John and Molly Chester) who got evicted from their tiny apartment because their dog, Todd kept barking while they were away at work. They had made a promise to Todd that he'd always have a home with them and this was now their gateway to a new adventure.

Wife, Molly had always dreamed of owning a farm. John for whatever reason went along with the idea. It was never quite clear why because this was no small undertaking--and they had never farmed before. Molly was a personal chef and John, a filmmaker. But hey, let's try farming.

I'm glad I rented it for a number of reasons, but I also had some serious criticism for it too.

It was beautifully filmed and I actually liked the animation segues even if they seemed incongruous to the film.

I liked that they didn't shy away from filming all the tragic events that can happen on a farm. But, whether it was to spare the sensitive viewer or planned direction, they kept the more graphic scenes out of the film. I wish they hadn't, but then again they probably weren't making this film with me in mind.

It was easy to watch--so easy, we watched it twice. There's nothing taxing about this film. All you want is for it to end well.

It's hard not to come away thinking it was a grand 90 minute commercial for the farm. I get it. They need to make money, but I'd rather pay them for solid information on how things worked, and not for a family friendly romp of how they persevered.

I will preface this by saying that I'm probably not the right demographic, but I really disliked the sanitized version of death, slaughter, and loss. Bad stuff happens on a farm. If you're not going to be honest about the harsher reality of running a farm, you're doing a disservice to people who don't understand what's actually going on behind the scenes.

My biggest gripe of all though was the money aspect. They effectively skimmed over this, but basically they bought over 200 acres in California with money from an investor, procured with nothing more than word of mouth.

Well isn't that nice. Wish I could get investors to give me grant money for my little homestead. I'd be happy to give them a lowdown on what really happens. I came away with the feeling it's not what you know, but who you know.

This money was used for the acreage, a state of the art worm composter and manure tea producer, irrigation, animals and equipment.

During the film, John Chester says that they went through a year's worth of funds in six months. So how did they continue to operate? I know if I ran out of money in six months, I'd be dead in the water until I earned enough money to start again.

The film never addresses the financial elephant in the room.

According to the LA Times, Apricot Lane Farm has 60 people on their workforce. Some are paid labor, others interns, and yet others volunteers. Granted you need that many bodies working a place this big, but again, who's getting paid, and how do you get that many people to work for you for free?

There's some organization that connects people who want to volunteer, but I think that must only work in California. Here in Texas we expect to get paid for that kind of labor.

They also had a farm advisor, Allen York, a quirky little man with some grand ideas. I'm assuming they paid him too out of this grant money. In the end, his plans for biodiversity proved correct. Through the judicious use of manure, cover crops, tree selection, and water retention they created an ecosystem that maintained a symbiotic relationship with nature. Way to go, Mr. York!

The transformation of Apricot Lane Farms is nothing short of phenomenal. Kudos to the Chesters for resurrecting that parched, dead land.

If I took nothing else away from this film, I learned that no matter what tragedy befalls you, whether it's snails, coyotes, or fire, there's always a way to work with nature. It's not always evident, but it's there, hiding in plain sight.

For example: Because Allen York insisted on planting a cover crop around their orchards, it managed to retain what little water fell there and redirected the excess to retaining ponds.

Yet because of the cover crops they were inundated with snails and gophers. The Chesters in turn let loose the ducks who ate those snails with alarming zeal. The gophers were a bigger threat until the Chesters built habitats for owls who then feasted on the gophers.

Another problem was coyotes. Here, I think they screwed up. We could instantly see that their chicken coops were barely secure enough to hold off a coyote. (Ask me how I know. Ha!) The first step was to build a tighter coop, next was to build a better fence, and finally, although Great Pyrenees are great flock protectors, they would've been better off with some donkeys.

In the end, they finally figured it out, and the coyotes, now prevented from reaching the chickens, went after the gophers instead.

I wish they had talked more about their high end composter and less about Molly packing useless stuff when she evacuated during a fire, but that's just me.

Speaking of Molly, aside from her planning the gardens and orchards with Allen York, it almost looked like John did most of the work. I'm sure she made herself useful, but mostly she was filmed standing by the wayside while her husband did the actual work.

It was a beautiful film, and I loved seeing the transformation. The cinematography was stunning. And the inspiration is contagious.

But it's not an honest documentary. The Chesters let you see only what they want you to see to carry a message. A Cinderella story with a fairy godmother investor. To the average person wanting to buy or rebuild their farm they would find the same process is out of reach because we don't have investors endowing our dreams, or volunteers to help with the back breaking work.

I'm glad the Chesters were able to succeed, but it only works if you have the resources. For the rest of us, it's one grueling project at a time as time and money permits. A lifetime of projects.

I recommend this film if only to see what a lot of work and perseverance can do to return the earth to health. I also recommend it because it teaches you there are ways to solve problems if you look in the right place.

It's a good film that's very inspirational, but not very practical.

Rebekah Loper said…
100% agree with inspirational but not practical. I just watched this Saturday evening, and while seeing the end result was awe-inspiring, it did feel like they ended up with a successful bio-diverse farm by sheer, dumb luck. Like. Why didn't they think of having the ducks eat the snails from the start? *facepalm*

Maria Zannini said…
Rebekah: That dog looked pretty guilty to me what with all the blood on his face.

Sadly their expert died when they were still in their early stages, so dumb luck definitely had a hand in it.

Angela Brown said…
Re: I’m glad the Chesters were able to succeed, but it only works if you have the resources. For the rest of us, it’s one grueling project at a time as time and money permits. A lifetime of projects.

I appreciate your honest review of this documentary, Maria. I'd heard it had garnered a number of awards, so I'm glad that it seems for the cinematic side, that was earned. But the point that you made, referenced above, is what stuck with me the most. As a documentary, I'd expect it to share in the gruel and grime as much as it would harp on the grand adventure.
November 18, 2019 at 3:00 PM

When I think about all the times we've had to stop a project because we ran out of money or something more important needed to be paid, I shake my head at this film.