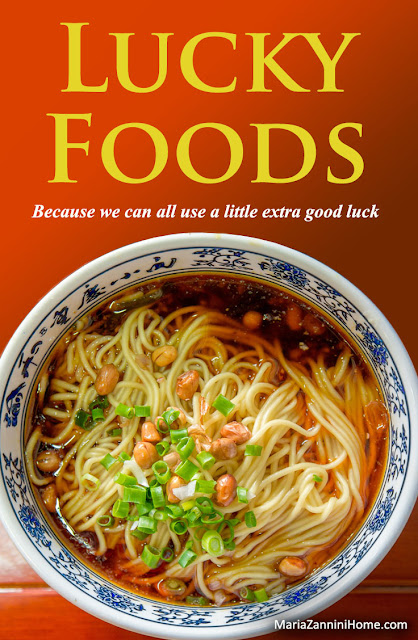 What do you plan on eating New Year's Day?

While I'm not what you would call superstitious, but I wouldn't mind trying anything that might bring me luck. After the historic bummer that was 2018, I'll do nearly anything to better my odds--especially if it's food related. I do like to eat.

I decided to do some research on what foods people around the world found lucky. So here's your list in case you're looking to better your odds too.

Black-eyed peas: In the South, they're a staple. I've never been a big fan of black-eyed peas--or at least I've never had them prepared in a way that makes me ask for more. Technically, though, any lentils will do. Supposedly, the lentils represent coins.

Long noodles: Noodles eaten on New Year's Day (or Chinese New Year) are lucky, but ONLY if you don't break them until they're in your mouth. Long, unbroken noodles is a symbol for long life.

Grapes: This one I didn't know. In Spain, sweet grapes are considered lucky. You should eat one grape for every chime of the clock when it strikes midnight and brings in the New Year.

Oranges: Another Chinese tradition. Golden fruit symbolizes abundance. Any golden food is considered lucky, so pass me the cornbread and lemon cake.

Fish: This one has three-fold symbolism. Fish swim in schools. (Abundance) Their scales look like coins. (Wealth) And they always move forward. (Progress). It looks like we're having fish and lo mein for New Year's!

Pomegranates: This one is new to me too. Supposedly, the abundant red seeds represent the human heart and prosperity. In Greece, they smash a pomegranate at their front door. The more seeds that spill out, the better your luck. I don't like to waste food, so I'll just eat mine.

Greens: Cabbage, collards, spinach, or kale symbolize the color of money--at least in the US.

Anything ring shaped: That includes donuts and cakes. This brings luck full circle.

Speaking of cakes, you should bake a coin in your cake. Whoever gets the coin gets extra good luck that year.

What shouldn't you eat on New Year's Day?

I didn't realize there were certain foods you should avoid on New Years.

At the top of the list is lobster because it moves backward and is also a bottom dweller. I guess that also includes shrimp.

Chicken and turkey (or anything with wings) are also bad luck. This is so your luck doesn't fly away.

If that's true, I'll hedge my bets and say no to chicken and shrimp--at least on New Year's Day.

What do you plan to eat on New Year's Day?