State of the Homestead, Garden Edition 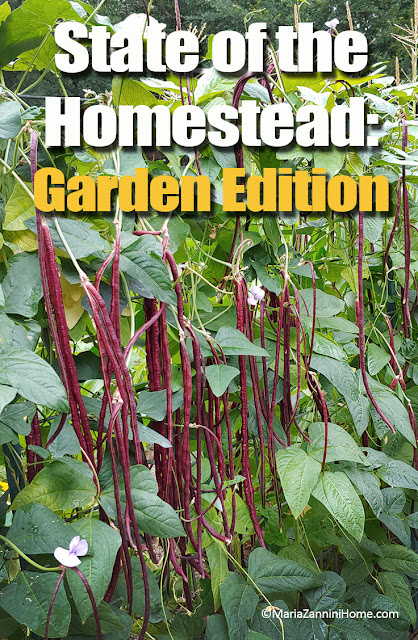 We've done all right for a year where everything wanted to go sideways. There's always something to do. Other than losing our dishwasher everything has been fixable. I hope to replace that dishwasher over Labor Day when most stores run their big sales.

Dishwashers are expensive! It's been a long time since I've had to replace one. I always get sticker shock with appliances. I'm willing to pay a little more for something that will last, but I had no idea they were that high. I think I want to get a Bosch. It seems to have the best reviews. The house came with an Asko but the direct replacement was above my comfort range in price. I'd like to keep it under the OUCH category.

Garden: The garden is incredible this year. Part of the reason is that I spent more time weeding and checking for insect predation. This year I fought squash bugs, squash borers, grasshoppers, ants, cabbage loopers, and a funny little bug called a netwinged beetle. It was not a predator, but it had me worried because there were so many of them.

So what did I plant this year?

Soybeans were the only disappointment. I could not keep them alive. This was the second year I had a problem with them. I'm beginning to think it's the seed. I bought them from the same company.

Zucchini, yellow squash, and spaghetti squash were my pride and joy. Despite having to patrol them daily, I beat the squash bugs. Only a few eggs hatched before I could find them, but I think I got all the babies. I've not seen a single adult.

Peppers and Tomatoes: I planted waaay too many in numerous varieties. If you want some, just come by in a few weeks. Every plant is packed with fruit.

Eggplant and Sunflowers are looking especially nice too, but they're just getting started.

Celeriac: A new to me vegetable. It was wonderful! Very easy to grow and tastes just like celery with the crunch of jicama. I'll definitely grow this again. We're too hot to grow celery here, so this is a great alternative.

Bush Beans: We harvested about ten pounds and there are a few plants still producing.

Snow peas: The cabbage loopers were hitting them hard but I still got about five pounds of snow peas. I only froze one package and we ate the rest fresh. Snow peas don't freeze well in my opinion.

Snake beans/Yard-long beans: They go by a lot of different names but they're basically just super long beans. They have a wonderful flavor. I harvested 11 pounds yesterday and I only picked a fraction from the vines. Big thanks to my niece for sending me seed.

Corn: We planted it more as a novelty but we should be getting a few ears this year if I can keep the ants off them.

Onions! My onions are actually growing and I've managed to keep the bed weed free. If I can harvest onions by the end of the year, I will be a happy camper. I have never been able to grow bulb onions.

Chard/Lettuce/Spinach: I have a few sprinkled here and there. I'm afraid they'll start bolting soon from the hot weather.

Potatoes/Sweet Potatoes: I've already done one harvest of potatoes but I started a few more eyes.

Sugar beets (mangels) I grow these for the goats.

Watermelon: Sometimes in my rush to get plants started, I sow too many seeds. That's what happened with the watermelon. They're so inconspicuous until they start sprawling.

Cantaloupe: I had one lone seed sprout. It is taking an incredible amount of time to grow. It was a mystery variety someone gave me. After many months, I'm seeing two little fruit forming. This was a plant that was infested with squash bug eggs, but I think I got them all.

Elderberry bushes: My newest berry bush. I'm really excited about them. I don't expect I'll get many berries this first year. Before 'rona hit I managed to get to the Mother Earth News Fair in Texas and picked up a couple of gangly sprouts. One of them is now over six feet tall, and the other had so many shoots I managed to split it into three more plants.

I hope to make elderberry syrup.

Strawberries: I think I'm going to move them to barrels or pots. Everything wants to eat them. All I ever find are berries with bites taken out of them.

Blackberries: Blackberries become invasive very quickly. I'm always digging up shoots. I think when I move the strawberries I'm going to replace them with blackberries in one concentrated bed. I'm also going to start planting volunteers along the trails of my woods.

Blueberries: They had a rough year. I need to repot them and get their soil amended. We don't have naturally acid soil so it's always a struggle to get their ph right.

Roselle Hibiscus: I finally got my seed for this hibiscus. The calyx of the flower makes a cranberry like tea. It has plenty of other uses too, but I've only ever had the tea.

Plum Trees: They were given a bad haircut last year, but they shoosted up new branches everywhere. Pruning is NOT my forte. I got one lonely fruit, but by God, we got to eat it before the birds did. It was delicious.

Fig Tree: Our fig is full of fruit. Figs are such a fickle fruit to store. I dehydrate some or we eat them fresh. I don't mind sharing the fruit with the birds since there's plenty to go around. What started as a little bush is now a giant tree. What I like about figs is that they have long tap roots and can handle long periods without rain.

Apple Trees: I bought two new apple trees before everything went nutso. One tree is doing fine, but the other keeps struggling. I think it didn't have enough chill hours in the nursery. Hopefully we'll have enough cold weather to get it back on track for next year.

Pomegranate: I've had one lone pomegranate tree in a pot for years with nary a fruit. This year I put it in the ground and bought it some friends. The nursery plants are mere twigs and haven't shown any interest in growing. I bought an older more established plant the other day. Once I get it settled I'll plant it close to the first one and see if we can get some pollination going next year.

Herbs: I didn't plant many this year. My neighbor gifted me a leggy basil that I turned into eight plants that are now big and bushy.

Cilantro is hard to grow in hot weather, but I gave it a shaded bed all to itself. I let it reseed itself which gives me fresh cilantro from late fall all the way until May.

I planted thyme and oregano in the landscaping. I'd like to transplant some of it to grow wild along the trails too. They're one of few plants that seem to thrive on neglect. I'm good at that. LOL!

I think that's everything. Once it cools down I'll plant some broccoli, bok choy, and cabbage along with some salad greens.

Greg insisted we build another set of raised beds in the pasture by his shop. They turned out really nice. I planted more tomatoes, peppers, watermelon and cucumber. Next year I'm going to plant half my squash over there and see if we can confuse the squash bugs.

There's always some new plant I want to try. This year was celeriac and elderberry. My long term plan is to wildscape the woods with plants that can manage without intervention. I need to focus on drought resistant plants since our rains only come in buckets or none at all.

Because plants are so expensive, I want to try rooting or growing from seed so if they die out in the woods I'm not out a lot of $$. So far I've been successful rooting Texas lilac, a new to me flowering bush.

Did you plant a garden this year? How is it coming along?

Any recommendations on dishwashers?

This site needs revenue to keep going. It's an ongoing struggle for me because I don't sell anything or ask for donations. Instead I include Amazon links for US shoppers. If you enjoy my posts, it helps me immensely if you start your Amazon search from the links attached to this blog. It costs you nothing extra, but helps me out a lot. Thanks, guys!