How Do Pandemics End 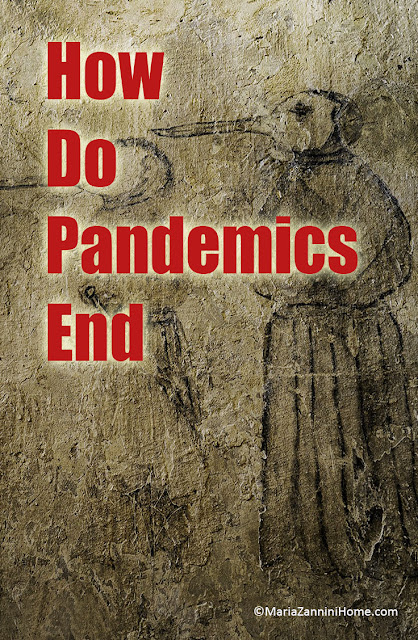 Here's a question I've been asking since the beginning of the year. I've been doing research on historical pandemics, seeking out information from the most respected scientific journals. Nearly all of them break it down the same way.

Historically, a deadly pandemic ends when:


So here's my thinking. A vaccine mimics herd immunity. I'm not a big advocate of flu vaccines in general so I don't have high hopes for this one, but I think it'll make most people feel better mentally.

My experience is totally anecdotal, but I've seen no difference in the years I get the flu vaccine and the years I don't. It's possible I didn't get the correct strain of flu vaccine to fight off the flu I did get.

Which begs the question, if the CDC is playing Russian roulette on what strains do show up that year, why should I bother? They've been wrong so many times that I've opted out of the flu vaccine for the last three years. I'll probably wait on the covid vaccine too and see how the rest of the population fares first. If you start growing a second nose I think I'll pass.

We need herd immunity one way or the other. This is why I don't get worked up about the infection rate rising. As long as the elderly or the compromised don't catch it, the majority of people will recover just fine.

Many of you won't agree and that's okay, but this is my frank assessment after all these months of studying this subject.

Will some people die? Of course. There's always that chance. But 80k people (in the US) died of the plain old flu in the accounting year of 2018. And those poor people didn't get any headlines.

For the record, even if you're old, crumpled people like Greg and me, the chances of you dying are pretty slim. We had it. We were miserable for two weeks a piece. And then we were fine.

I am glad we got it before the hysteria set in or else I would've added anxiety on top of my other symptoms. I am very good at anxiety.

Honestly, I thought it was the flu that lasted a little bit longer than usual. We didn't even think to go to the doctor because we thought it was plain flu. What was she going to do but tell me to drink more water and take aspirin.

In a couple of years we'll all be armchair quarterbacking, saying we should've done this or that. I'm not worried anymore. Partly because we've already been through the worst, but mostly because we've done all we could to stay safe. You can't ask anymore than that.

You are welcome to disagree, but if you're hostile or belligerent your comment will not be published.

Here are a few of the links I've gathered on pandemics. It's interesting reading if you have the time. I've been collecting this information since January so I've got quite a portfolio now. These were my favorites.

We've had other pandemics since the Spanish flu (Hong Kong flu, SARS, Swine flu, Zika, HIV, Ebola) to name a few, but none of them seem to have fazed us. I do remember taking extra precautions when H1N1 came along but I don't remember people panicking.

There's an interesting footnote about mass amnesia in regards to the Spanish flu. Upwards of 50 million people died. (Some statistics say it could've been as high as 100 million.) How can we as a people forget that one third of the entire world population became infected, and over 50 million died? Yet we forgot so completely that very little documentation exists today.

Some say it was overshadowed by WWI. Others think it was so widespread, it was simply accepted as fate. Whatever the reason, it vanished from our collective memory until now.