State of the Homestead, End of Summer 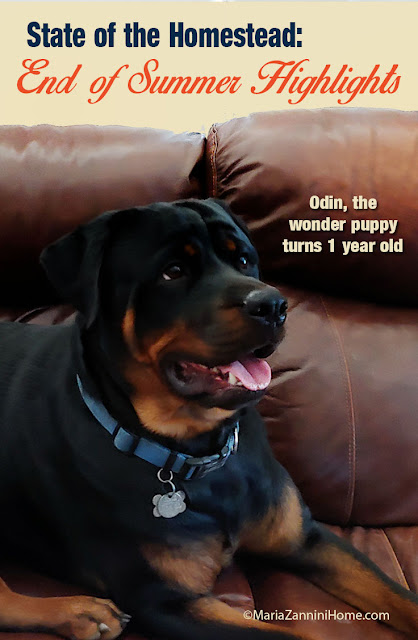 It might be the end of summer for most of the northern hemisphere, but it's still plenty hot in Texas. I'm hoping by next week we can mellow out to the lower 90s.

Garden: We had a great year garden-wise. We ate fresh veggies every single day and what we couldn't eat I canned, dehydrated, or froze into portions.

The winners this year were definitely the tomatoes which we ate fresh since the harvest began. I cut them into thick slices with a pinch of coarse sea salt and a drizzle of Nonna Pia's Balsamic Glaze.

You must give this glaze a try if you like a thick, savory vinegar reduction. Its flavor is hard to describe. It doesn't have the sourness of vinegar. It's a deep, rich savory glaze with just a hint of sweetness. I had it as a sample in a store last year, and we were hooked. Drizzle it over fish, meat, or vegetables. It is absolutely delicious.

If we didn't eat them fresh I froze slices of green tomatoes so I could bread and fry them during the doldrums of winter. I also canned salsa so that will be nice in the middle of winter too.

Our other huge winner was the summer squash. I don't remember how many years it had been since I'd been able to grow them. Usually the squash bugs or borers got to them before I could harvest.

This year the squash bugs attacked again, but because we were home more (thanks, covid) I was checking my plants more often and found the egg clusters before they could hatch. I was able to harvest loads of yellow squash, spaghetti squash, and zucchini. I'm still getting squash!

I overdid it with sweet banana peppers. All my seeds sprouted so I had way more pepper plants than I needed.  I always over plant just in case something doesn't make it. This year everything sprouted and I gave away loads of plants to neighbors. Now I'm trying to figure out what to do with so many peppers besides pickling them.

The watermelon was a nice surprise this year. We've been eating one a week. There are still four or five still in the garden.

Goats: I've been wanting to sell two more goats. I think I have them sold but they haven't called to pick them up yet. These people were so not ready for goats, but we told them we could wait a week or so until they had a proper pen for them.

By the way, Brownie, our herd queen helped to bring Jammy the cat back to health. We needed something to return the right gut bacteria into his system. I had researched Fortiflora which is what many vets recommend, but I wasn't happy with the fact that the product used dead animals for one of the enzymes. Further research suggested giving the cat raw goat's milk. Our vet said it was fine. Fortunately, Brownie still had plenty of milk. Within a week, Jammy's bowel's returned to normal. Thank you, Brownie!

Chickens: I have lots of chickens ready for harvest. I had planned on doing a batch of them yesterday but we had blessed rain that day. Buckets of it after a long summer of drought. We should have some better weather in a few days.

Quail: Most of the quail are in the freezer. I have another 15 birds to harvest and then I'll call it done for the year.

Da Dogs and Cat: We are s-l-o-w-l-y trying to train Odin (the rottweiler puppy) to stay calm so he doesn't pounce on Nana every time he sees her. He's overwhelming to say the least. I've got two matching bruises from when he accidentally knocked me into a wall. He doesn't mean to be so rough. He just doesn't know his own strength.

I actually test him every so often. I'll let him get a hundred feet away from me and then I'll drop down on the ground or call out for help. He is there in an instant, nuzzling my head and trying to help me up. I've never seen a dog so fast. He's got to be one of the powerful dogs we've ever had.

If we lived closer to a certified training facility, I would love to train him for search and rescue. He is a natural.

Odin is now 110 pounds and one year old. That's him in the picture above. He gallops like a herd of elephants. Unfortunately he doesn't stop on a dime, so it's best to get out of his way.

By the way, if you want a good dental tool that doubles as a chew toy, I highly recommend this one. It's worked great for Odin, aka Super Chewer.

Jammy the cat, as I mentioned earlier is off the near-dead list. Boy, that was close. I don't even want to tell you how much it cost to save him. Let's just say it went from ouch to yikes in just a few days. Hospital stays are not cheap.

Even after he was out of danger we couldn't get his bowels straightened out and it really worried me.

Thanks to the goat's milk his bowels are normal again. His sutures came off and he's so much happier. He purrs or talks every time he sees me. He's such a sweet boy.

2020 has been a struggle on many fronts, but where we were left to our devices, it was a stellar year. It makes me feel good that we did this well despite shortages and closures.

It took nearly nine months before I found alcohol and sanitizing wipes at the stores. Incredibly enough, we didn't run out of the stock I had at home. We were careful not to be frivolous so I made my supply stretch until we could replenish.

Since we grow much of our own food I feel secure. My goal now is to build up a year's worth of stock I can't grow or make myself. Things like seafood, oil, vinegar, and alcohol. I don't ever want to run out of stuff if we should have another year like this one.

How are supplies where you live? Is there anything you've had a hard time locating?

Did you garden this year? How did it go?

Maria Zannini said…
Madeline:
re:
The only gardening we do is pull weeds from the cracks in the pavers.

Stacy McKitrick said…
So glad Jammy is doing well. Seems like you are, too. No gardening for me, though. But I am walking most everyday, so I'm finally moving around!
August 31, 2020 at 11:16 AM

Jenny Schwartz said…
Wonderful news about Jammy. As for the birthday boy - he is gorgeous! But I can't believe how fast the time has passed. I blinked and the cute little pup is huge!

Over here, the weather decided to greet the first day of spring with a storm. Except, then it didn't commit to the effort. So we have a bit of rain and a bit of wind, but none of the forecast hail damage. Very happy :)
August 31, 2020 at 5:29 PM

Marlene Dotterer said…
I'm so glad Jammy is okay. What a scary time!

Regarding your peppers: I roast mine and after they cool, I put them in a baggie and freeze them. They're easy to use: just take out however many you want, slice or dice and include in whatever you're cooking. It's easy to slice them still frozen. In fact I like that better because there's no juicy mess.

Maria Zannini said…
Stacy: Walking is good. I keep promising myself I'm going to start walking the neighborhood once I get all these projects done. I'll settle for having everyone healthy for a change.
August 31, 2020 at 9:26 PM

Maria Zannini said…
Jenny: Let's hear it for not committing to a hail storm. :)

Maria Zannini said…
Marlene: You know, I've never tried roasting the sweet peppers. I'm going to try that and see how they turn out. Thanks!
August 31, 2020 at 9:28 PM

B.E. Sanderson said…
Yay for Jammie! I'm so happy to see that he made it through. :hugs:

We don't garden, but the neighbors do. They bring me stuff and I give them baked goods. Win-win. Finding things around here seems about back to normal, from what limited exposure I've had to the outside world lately.
September 1, 2020 at 5:07 AM

Maria Zannini said…
B.E:
re: They bring me stuff and I give them baked goods.

Angela Brown said…
Glad to hear that the gardening worked out this year. I recall you talking about those dastardly squash bugs destroying a crop on your blog before.

Odin sounds like he is going to be the most darling protector! And Nana, bless her, still wanting to be the queen of all queens :-)

My daughter made the cutest observation just yesterday. I'd come home from my weekly grocery shopping (I go weekly to get fresh fruit). Got everything put up and she says, "Yay! Look, I can finally see the back of the freezer." It hadn't dawned on me that I'd been keeping it stocked to the brim, grabbing little things here and there, so that we wouldn't run into another situation of everyone hoarding and can't find a piece of cheese anywhere. LOL!! Of course, that means it's time to slowly restock.
September 1, 2020 at 11:58 AM

Maria Zannini said…
Angela: I think the hardest thing for me is to keep stock rotating. It's easy to lose stuff at the back of the freezer. Good job using what you have and keeping it moving.

re: cheese
LOL! I hear ya! Greg gets grumpy if we run out of cheese. It's the one item I always keep in stock. Cheese makes everything better.
September 1, 2020 at 1:42 PM