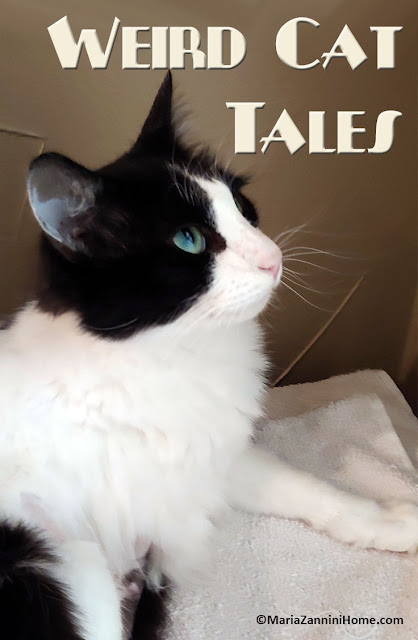 I think Jammy might've used up one of his lives.

A little over two weeks ago, I noticed Jammy was vomiting. I don't get overly concerned when an animal vomits, especially if he goes on to act normally. Monday came around and although he had stopped vomiting he ate very little. I noticed too he looked dehydrated.

I got him to the vet and she ran blood work, X rays, and an ultrasound. His abdomen was painful and distended but she couldn't find any blockage, which was her preliminary suspicion.

Jammy is renoun for eating insects and lizards so my gut feeling was that it was something he ate. I asked if she could do an exploratory surgery to rule it out. She agreed. And that's when she found a 1/2 inch wide beetle (minus the head) so tightly wedged in his intestine that nothing could pass through.

This is when our problems went from bad to worse. Jammy did not respond well after surgery. He was listless and weak. He wouldn't eat or drink. He spent days at the hospital and he was getting worse. My vet finally said that maybe I should take him home.

We both knew what that meant. I was bringing him home to die.

I made him a quiet area in the laundry room with a bed, food, water, and his litter box. I had soft coverlets sprawled everywhere for him. I sat with him and spoke softly, repeating the same words I said to him when I first found him as a starved feral kitten.


When he was a homeless baby he used to hide in my garden and meow pitifully. I'd call back to him. "I know!" with a reciprocal cadence, answering his meow in understanding. Since then he knows those words mean, "It's safe. Mom's here." These were the first words I taught him.

And then to the present. Every couple of hours I had to come in and give him some awful medicine. I injected an IV of fluids three times a day. I force fed him a few cc's of soft gruel several times a day. This went on from five in the morning until ten at night and then the routine would start all over again.

A funny thing happened over the course of the next few days. He was still desperately weak. A couple of times I even thought he had died because he was so very still. But when he was awake he started to look more alert. He'd meet me at the door whenever I came in even though he knew it would mean another round of horrible-tasting medicine or the stab of a needle.

On the day he greeted me with a meow, I knew he had decided to live again. I let him sleep with me and he'd snuggle against my body and never moved the entire night.

I was worried because he still didn't want to eat on his own. The vet said if this lasted one more day I'd have to bring him back so they could feed him through the nose.

Jammy must've heard that conversation because that very day he started showing a little interest in food. It wasn't much, but it was a start. I had been posting his progress on Facebook and several friends had recommended baby food. Brandy advised me to look for Beech Nut as it had no garlic or onion flavoring.

I was so happy to see him take a few licks of the baby food that I nearly fell to my knees in gratitude. (I thought better of it because I wasn't quite sure I could get up again.) LOL!

At this point I'd been living on just a few hours of sleep a night. During his worst, I went 22 hours without sleep, trying my best to keep him fed and hydrated and medicated, jumping up and checking on him because he'd have a rough cough or a disturbing gurgle in his belly.

That was our long night, the night that would either make or break him. The next day I brought him back to the vet because he was running a fever.

More drugs and one more sleepless night, but the next day he seemed brighter, more talkative and curious.

I think in the end what turned him around was him knowing that he was safe and at home. Despite all the medicine and the needle pricks, he seemed to accept that we were doing this for a good reason. Jammy never holds a grudge. After every drug cocktail, I'd wipe his mouth and brush him.

This morning, more than two weeks after this ordeal began, he started grooming himself. At night he curls up against me and purrs.

He's not quite out of the woods yet. His bowels are loose, but that could be from all the meds. I've got a call in to the vet and hope to hear from her today.

As I mentioned on Facebook, I don't think I ever worked so hard to keep an animal alive. He almost didn't make it. I was so afraid he was going to die on me, but we kept fighting the good fight and praying for a miracle.

His stitches come out on Thursday. I hope by then I can close the book on this hell.

Of all the things he could've come down with I never would've thought it'd be a giant beetle lodged in his intestines. But then it is 2020, so why not?

What's the strangest thing that ever happened to your pet?

PS  Thanks to all my Facebook friends who offered prayers, healing thoughts, and good advice. It helped more than you'll ever know to have such caring friends at such a low point in our lives.

Jackie said…
Maria the bond of love between you two turned the corner for Jammy. Glad to hear he is healing and responding positively so one day your purrbox baby will be his old self!

Marianne Arkins said…
WOO HOO! So glad he's turned a corner. Cats are notoriously hard to heal when they're sick.

Re: weirdest things... Bailey ate (and passed) an entire washcloth (I had to help her with the "passing" part--the things we do for our fur kids), and a pretty good sized rock...

Maria Zannini said…
Marianne: You ain't kidding they're hard to heal. I guess I was spoiled. My last cat never had a sick day in his life.

re: wash cloth
Oh, no!!! I'll bet that wasn't pleasant. We've had the occasional dog that eats the stuffing from toys. Once they start that, no more toys until they're older.

Jenny Schwartz said…
You're a miracle worker to have pulled Jammy through. He is so lucky he found his forever home with you.
August 24, 2020 at 5:23 PM

Angela Brown said…
As I read what you shared, I recalled sleepless nights with my kiddo, staying up at all hours, hand-feeding her food when she felt too ill to eat on her own or just losing sleep sitting in some awkward position so I could hold her and she could get some sleep, mostly before finally realizing she was allergic to most things in life lol!

You are a wonderful mom, Maria.

I've probably said that a million times before, but it is something worth saying a million an one.

Maria Zannini said…
Angela: Oh, allergies are the worst, especially with little kids. You can have one that's fine and the next one has a dozen unknowns that set him off. It's maddening for a mom.

When I think of you and D, I think she's one lucky kid. It's a bond that she'll take with her when she has her kids.

the author said…
Oh, what a time for me to be offline. Sending lots of love and healing thoughts for Jammy and you.

Jakol was always my sick cat; he was prone to all sorts of infections, especially respiratory (we got him that way from the shelter; they were going to put him down because he was so sickly.)

When he wouldn't eat conventional food I would make him homemade chicken bone broth, which I would strain well and cool down to room temp before I offered it too him. It helped the dehydration and I could mix his liquid meds in it (he was a tough one to dose.)

Hang in there, my friend.

Maria Zannini said…
Lynn: All cats are hard to medicate! There was one pill that is extremely bitter. I know because I had to break the pill in half and I accidentally brushed my lips with the powder from that pill. No wonder he fought me so hard when I gave it to him. It was awful.
August 26, 2020 at 3:26 PM