A Ghost Story For Halloween 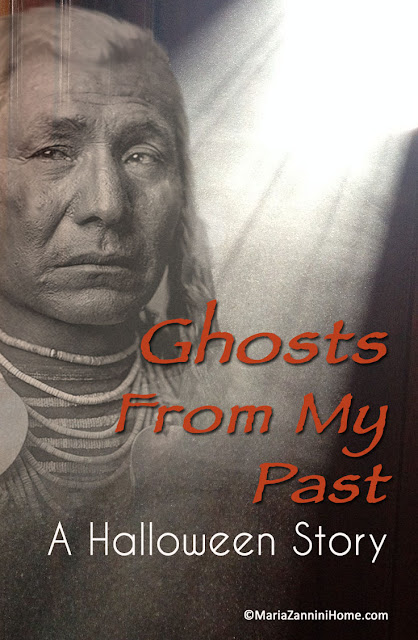 In honor of Halloween I thought I'd tell you a true ghost story.

It's my oldest memory. My mom says I was three years old. Even now, I can remember it like it was yesterday.

I was in the kitchen with my mother. She was wiping down the counter top when something caught my eye. I looked up at the ceiling and saw people climbing. They got smaller as they went up and although I wasn't sure what they were on, I could see bits of stone cropping up here and there. They disappeared as they neared the bare light bulb in the kitchen.

I tugged on my mother's apron (because all moms wore aprons back then) and cried excitedly that there were people in our kitchen climbing a mountain. My mother looked around and then at me.

I pointed up. "Those people. Look mama, they're going up."

She shushed me and insisted we were alone.

I remember jumping up and down. "No ma!" The people are going up. Where are they going?"

Mothers being mothers, she insisted there was no one there, but even as a child I could tell I had rattled her. She looked up at the ceiling several more times. Meanwhile I sat and watched the people go up.

There were all kinds of people. Women, men, old and young. They all queued up in silent order. Each one climbing up as if they were reporting for duty.

Even though I had made quite the racket, excitedly making their presence known, not a single one paid any attention to me. It was as if they couldn't hear or see me.

Along this long procession, a new face emerged. He was old and his back was hunched over (much like mine does now). His face was dark and craggy. His hair, salt and pepper with more salt than pepper.

His nose was large and flat, and his coarse hair was decorated with something that looked like a feather. He was an old Indian.

He stopped to look at me while the other people went around him. He seemed puzzled at my presence  and he studied me for what seemed a long while. Then he grunted, dismissing me perhaps as an apparition myself. He turned away and returned to climbing.

That's when my excited peals began again. "The Indian, mama! The Indian is going to the light." I pointed to the bare light bulb.

Again my mother looked up, more upset than before. Then she picked me up and held me close. "What Indian?"

But he was gone and my exuberance was crushed. "He's gone. All the people are gone." My moment of spectral lucidity had been spent.

My mother thought that was the end of it, but I never forgot it. I reminded her about the story more than fifty years later while she was visiting me once.

She stared at me as if she herself had seen a ghost. "I can't believe you still remember that. You nearly scared me to death that day."

It was my first memory, my oldest memory. Me and that Indian, both of us passing through life in opposite directions.

Here's a way to support me without it costing you a penny. Click and shop on any Amazon link on my pages. I receive a small commission at no cost to you.

I'm posting a few items that might be of interest. I've had two questions this week on which vacuum sealer and which instant pot I recommend. I'm also posting a finger splint for someone who just busted her little pinky. Ouch! Finger splints are handy to keep in your medicine chest. Ask me how I know!

Oh, gosh. I'm a walking Ghost Whisperer. LOL. I've seen ghosts all my life. The second apartment we lived at in Chicago was particularly haunted.

Maria Zannini said…
Mike: I've thought about it often, more now since I'm on my way out. :o)

I honestly can't figure it out, but I have a sense that it's more symbolic, something my 3 year old brain could fathom. I had one other sighting like that one that happened when I was maybe 7 or 8. The rest were more decipherable.
October 26, 2020 at 12:43 PM

Marianne Arkins said…
Gee, I wonder who that person with the crushed finger is? .... :-)

Angela Brown said…
This story definitely gave me the shivers. So much in this world, or rather, beyond our normal human comprehension, that we've yet to tap into.
October 26, 2020 at 7:31 PM

Maria Zannini said…
Angela: As a 3 year old I was too naive to be scared. I just thought it was neat that people were disappearing into the light.