How To Care For a Chronically Ill Pet 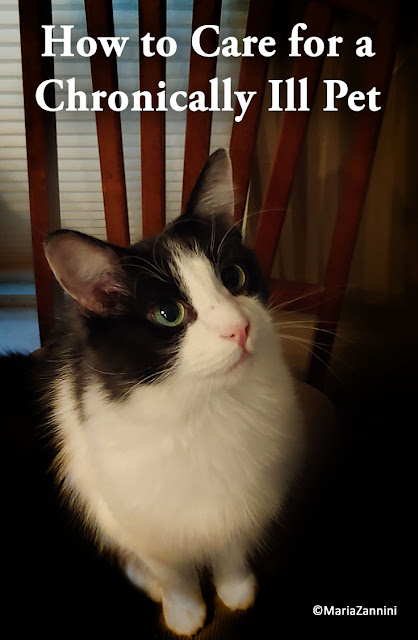 In August of 2020, our cat, Jammy swallowed a giant beetle and it got stuck in his intestine. Little did we know that would be the beginning of a very long journey.

We nearly lost Jammy several times. Even though we got him to a vet the minute I knew something was wrong, the damage was done. That beetle had ulcerated his esophagus and intestines. Surgery repaired the immediate problem, but Jammy was a long way from well.

He should've recovered within three days of surgery. He only got worse. He should've started eating on his own. Instead, he was wasting away while in the hospital. I was asked to bring him home...to die.

That doesn't mean I always win. I've lost some of my babies despite my best efforts. But I won't quit until I've exhausted all my options.

I did my research as best I could with what information we had. I called my vet often to give her updates and run some of my ideas with her.

I put myself (and Jammy) on a strict schedule. Every hour or so I'd give him a few cc's of watery gruel. Three times a day I'd insert a needle and administer fluids. And then there were the drugs. Some had to be given before others. Others couldn't be combined. Most had to be dissolved in a slurry. One was so disgustingly bitter, I would sweeten it with milk so he wouldn't throw it up.

This went on for months.

Slowly. Very slowly, I weaned him off his meds one by one. He's on solid food now, as long as it's a very smooth puree. Anything chunky or hard will make him vomit. There is so much scar tissue lining his esophagus.

So here we are in Month Four. I'm happy to report that other than his new precise diet, Jammy is the picture of health. He plays, he purrs, and every night he sleeps in the crook of my arm.

He may never again eat hard kibble (his favorite) but at least he's alive and happy.

I learned a lot from this ordeal and I want to share my tips with you. If you have a pet with a chronic illness, be it infection, ulcers, old age, or other long term issues, I promise these steps will keep you sane.

You might not always be able to save your pet, but you can keep him comfortable and help him better able to handle his illness or disability.

At some point, you too will have to look at the big picture. Is your pet thriving or existing? It's a hard question with an even harder answer.

It's my hope that you never have to face a long term illness or disability with any loved one. Our pets can't speak for themselves so it's vital that you speak for them. None of us want to lose our pets, so don't throw in the towel too soon.

It can be discouraging and heart breaking. They might never go back to being normal, but you can still give them a happy life.

I'd be interested in hearing about your experiences. Have you ever had to take care of a pet with a long term illness or disability?

check out my Favorite Things Page. These are items that I have bought for myself or friends and can absolutely recommend.

B.E. Sanderson said…
You did wonder, Maria. And I'm so glad it all paid off. Yay for Jammy!

We had Max. He came to us as a stray who wandered into our yard with all the other strays. He was a mess. At some point, his jaw had been broken and he had the mouth infection to beat all others. He drooled constantly and stank because every time he tried to clean himself, he ended up making it worse. But he was such a sweet baby who only wanted to be loved, so I took this stray to the vet and said, if you can fix him, fix him. If not, put him down. The vet fixed him. Mostly. For the next four years, he had chronic mouth infections. We ended up having to pull all his remaining teeth, but even that didn't stop the infections. He could only eat his food if it was scooped into a pile, so I stood beside him as he ate, scooping as he went. Finally, his mouth hurt so much, I couldn't get him to eat cat food, so we went to people food - canned beef, chicken, tuna, Vienna sausages (those were his favorite) - pureed down to mush. When he refused to eat even that, we made the decision to let him rest. He was a great cat and he deserved to not be in pain anymore. If we'd thought there was anything else we could've done, we would've kept on trying. But he let us know that he was done. He was ready. Max was a great cat. It's been five years now and he's still the wallpaper on Hubs computer. =o(

Jackie said…
The love we have for our pets is unconditional, as is theirs for us Maria.

Illness, old age and other reasons aside the fact that these little friends are worth fighting for tooth and nail is well described by you in your efforts for Jammy.

I am pleased to hear his little self is better and your comment of the boy sleeping in the crook of your arm made me smile to think of the picture it made me see i my mind.

Success is never assured no matter what measures are taken by a pets owner and their vet, however everything done to give the animal even a slim chance at living a quality filled life longer is well worth trying.

Karl and I have been down that road with our four and it did not get easier with any of them but the good memories far outweigh the bad ones now after time has passed between having them underfoot to finally all of them being gone.

I agree with B.E. Sanderson that animals know when it is their final days, we just need to listen to them instead of prolonging things for our own benefit.
December 21, 2020 at 9:13 AM

Maria Zannini said…
BE: I cannot even imagine the pain poor Max endured. You are a saint for taking him in and nursing him back to health. He sounds like such a sweetheart.

I know your continuing saga with Kira too. There was a point when I had three geriatric dogs in a row. I felt like I was running a nursing home for old dogs. When the last one died, I couldn't believe how much time I had on my hands. I had no idea I was doing so much for them.

Maria Zannini said…
Jackie: We do what we can because they're family.

I always feel like such a failure when I lose one of my kids, even though there wasn't anything more I could do to save them. It's hard to give up when you know the alternative.

Jackie said…
Maria it really never gets easier but it is not supposed to I think otherwise we would dishonor the very essence of why we have a pet in the first place.

Karl is slowly winning me over to try again with a new pup when he retires.

I think by then we might all be ready to love another small animal even though we know at some point they will break our hearts again when their lifespan is up.
December 21, 2020 at 10:43 AM

Luba Meader said…
I loved hearing Jammy is well and thriving and sleeping in the crook of your arm. Our late cat, Shadow was with us for 14 years. Towards the end,I took her to the to the vet who told us she had cancer. I opted to have her put down so she wouldn't suffer. She was starting to loose her teeth and fur. I noticed something was wrong because she wasn't eating anymore. I sure miss Shadow.
December 21, 2020 at 12:25 PM

Maria Zannini said…
Luba: When it's a terminal diagnosis, it's a greater love to put them down before they suffer. I'm sorry for your loss.
December 21, 2020 at 1:34 PM

Gwen Gardner said…
I'm so glad Jammy is doing better. He's lucky he has you for his mom.

Your comment about "is your pet thriving or existing?" really hit home. The last year of Tuffy's life was a struggle for us all. We wondered a lot if it "time". Our guideline was that he still enjoyed eating (although he was handfed because he couldn't stand that long) and going for walks. Then he wasn't strong enough for the walks, but he enjoyed sniffing around the front yard. All day long we'd pick him up from a fall, or he'd get stuck in the barstools, or stuck in a corner or get tangled in a lamp cord. He couldn't be left alone. Every day I told him he was the best boy in the world, and that he was okay, that I loved him. We gave him pet CBD oil for his joints (an excellent way to sneak into his food without him knowing it, because he was so darn smart!). Potty pads littered the house because he was incontinent.

When we got to the point of reevaluating his quality of life, we called a vet to come to the house to evaluate him. Based on what she saw, she believed it was time to let him go. We'd always wanted him to go peacefully in his sleep, at home in his own bed. We just never thought it would be in this way. It was done with compassion and love right then. I highly recommend going this route. We never wanted the mad dash to the vet which stresses everyone out.

End of life care was hard work (Tuffy was 15). But such a labor of love that I'd do it 1000 times over. This was last October, and it's amazing how we're still making accommodations around the house as if he's still here. Sorry I rattled on!
December 23, 2020 at 8:33 AM

Maria Zannini said…
Gwen: Don't you dare apologize. I followed your posts about Tuffy all the way to the end. I know exactly what you had to go through. We've done it ourselves with our old dogs.

You are the best, Gwen. Tuffy lived a good long life and that was all thanks to you.

Of all the dogs we've owned, we've only had one who died peacefully at home. My Chelly died in my arms which is exactly what she would've wanted.