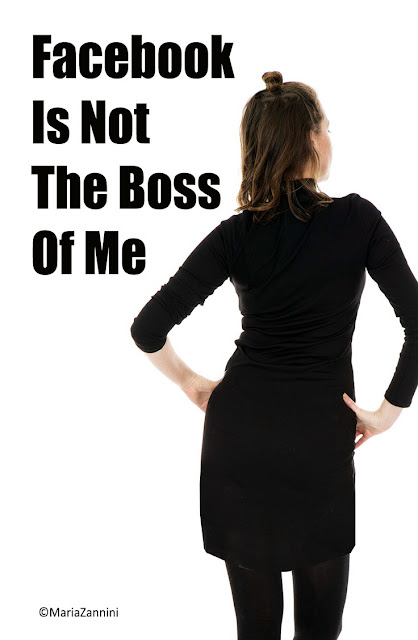 In a moment of disgust, I deleted Twitter all together. I never liked it anyway. Facebook is more problematic because I know so many people there who are actual friends and not "networking friends".

I'm sick of Facebook for the most part. Their censorship and bias is cringe-worthy even to someone with a centrist viewpoint.

But it got me thinking about what's really at stake. I hear people complain about Facebook all the time. Everybody knows it's taking and sharing our information to Facebook-friendly app developers and associates, (including tracking information), but nobody does anything more than grumble.

We forget that WE have the ultimate power, but it's only our power if we use it. So this is what I've done. Instead of allowing Facebook to take from me, I take from it.

I use its platform to post my blog posts. I sometimes comment on people's FB posts (but only if I have no other way to communicate with them). I will not click on any Facebook ad. Ever.

If it's something I'm interested in, I'll use a separate private window and search the net for that vendor.

In short, I use Facebook, but I don't let it use me. I don't want it to know anything more about me than it absolutely has to. To be fully transparent, I do respond to people who mention me or reply to my posts, but it's rare for me to go farther than that unless someone has lost a pet or gained one.

Most of you won't go through that trouble. You might think it gives you visibility for your books or products, but do some research before you blindly hand them credit. Have you really sold all that much through Facebook?

My analytics show that most of my reach comes through Pinterest, Google and DuckDuckGo searches. In all the years I've tracked my traffic, Facebook has never come up as a significant contributor.

I am on MeWe now. Although I have a few friends there, many still prefer to post on Facebook because they get more interaction.

It's hard to stop the addiction when you're rewarded with all those smiley, laughing, and oh-wow faces for every little thing you say.

Really? You're happy that someone gave you a thumb's up?

That is the extent of Facebook's reward system and in exchange they get to know your likes, dislikes, work, hobbies, food, the cars you drive, your sexual preference, your politics, religion, education, and your buying habits. You gave away too much for that smiley face. You deserve better.

All I can say is that change starts when one person stands up and says: No, I will not let you use me.

So this is me, saying no.

I've had several new people ask to friend me in recent weeks. I stopped accepting anymore friend requests since it won't do them any good if I don't interact.

If we're friends, we're friends even if I don't use Facebook to say it. If you want to talk, you probably have my email address, or we can talk on MeWe, or my blog. But I'm distancing myself from Facebook. It's not the social platform it used to be. Judging from its trajectory, it's getting frighteningly worse.

If for some reason Facebook decides to keep me from posting my articles, I will leave it entirely. I don't need it as much as it needs me.

B.E. Sanderson said…
Yep. I decided a while back that FB would not get a penny more of my money. I never saw any sales come from FB ads anyway, so it's not that big a loss for me. I still use it, but the only thing FB is better at right now is reach. I use FB Groups to market - all of them free. Sometimes I see sales, sometimes not. I'm cross-posting to MeWe in hopes that venue will eventually reach FB size and marketing power.

Maria Zannini said…
BE: The only thing I would really miss on FB is a couple of the groups I'm in. I've gotten a lot of good information on gardens and goats.

MeWe is tiny, but Facebook was once tiny too. There are too many gargantuan companies in the world. Too few giants making the rules without competition for our loyalty.
March 1, 2021 at 7:31 AM

Brandy said…
I’m on MeWe, but haven’t explored it much as most of my friends are on FB. I don’t open ads on Facebook. But, I do comment on friends and groups that I belong to on there. I am not now, nor will I ever be on Twitter.
March 1, 2021 at 8:44 AM

Luba Meader said…
I do not open ads on Facebook either,that's inviting trouble. And I won't go on Twitter what can you say with an allowable 140 words. Plus I don't like what I read on there. I hope you won't altogether leave, Maria. Doesn't sound like it. I haven't checked out MeWe, but I have Parler. As always, Maria I love your posts!!!
March 1, 2021 at 9:03 AM

Darke said…
For the last month or so, I've reported all the FB ads as irrelevant, because they are, and I have NEVER paid them to promote any of my stuff EVER, as you said, it doesn't do anything. Twitter can be fun if you keep politics out of your stream. I'm careful who I follow and check out what they post before I do anything. It's all about keeping control of what you see, and that is do-able. Hell, I'm even on Tik-Tok and it's the same thing; if you 'like' certain videos, then they'll show you more of that kind. It is about control and how YOU manipulate their algorithm.
March 1, 2021 at 9:19 AM

Madeline Mora-Summonte said…
I never joined Facebook or Twitter. I kept thinking I should for marketing, etc. but I just really didn't want to, didn't need/want one more thing. I probably missed out on some opportunities because of that, but overall I'm glad I didn't. :)
March 1, 2021 at 9:38 AM

Maria Zannini said…
Luba: Thank you! I'm not a social butterfly so maybe social networks aren't for me anyway. But I love to hear about people's lives without it imperiling them to spammers and scammers. Facebook is no longer a safe place to hold conversations.
March 1, 2021 at 10:08 AM

Maria Zannini said…
Darke: I've read somewhere that reporting the ads sends a message to the vendor that Facebook doesn't help their marketing.

Every so often FB runs an ad on plants or pets that might look handy, but I'll never click that link. FB doesn't need anymore information about my spending habits.

And you are right about the algorithms. It's time we started using their tools against them.
March 1, 2021 at 10:11 AM

Robin King Hunt said…
Maria: Another well-written blog! Bravo! And I just happen to totally agree with you. I, too am very dissappointed with what FB has become, but I use it, too. I help friends and family sell things on FB Marketplace. I sell everything from cars to knick knacks. I dumped eBay back in November when they announced their divorce from Paypal, and because they were financing transactions themselves, their piece of the pie just got a whole lot bigger. I was just considering how to use FB MP without FB....hmmm we shall see. So I understand your stance on FB. ..and I never did join Twitter. This chick doesn't tweet! I will be in touch with you, as I have interesting news about a previous AT&T employee. Thanks for all that you do - Robin
March 1, 2021 at 11:30 AM

Maria Zannini said…
Robin: I didn't know that about eBay.

Greg has used FB marketplace a couple of times, but we've had much greater success with NextDoor for farm and garden stuff.

I hope you and your family are doing well. Your poor family has gone through so much in recent years.
March 1, 2021 at 1:14 PM

Mike Keyton said…
Great article, Maria, but one thing intrigued me. You mentioned Pinterest in the context of marketing. Can you explain? I have several Pinterest boards used largely for visual prompts in terms of character or setting. They’re proving quite popular though that was never my intention. Are you suggesting there’s away of publicising my books on them as well?
March 1, 2021 at 1:40 PM

In my experience, Pinterest was a slow climb to visibility. At first, no one knew me, then one post went viral, "What to do when I die". It escalated after that.

It's been mostly dumb luck on my part. All I know is that a heck of a lot of traffic comes from Pinterest and I think it was due to that first viral post.

If it were me, I'd follow the crumbs you've strewn with your visual prompts. You need a headline and a link back to your books or your blog.

The other thing I can suggest is that you always make your art the same size. The current suggested size is 735 x 1102 pixels. Pinterest is flexible on size. If you stay within this ratio the art shows up best.

This will require you to use a photo editor like Canva or Photopea (use the free versions).

I made myself a template on Photoshop and use the same size for anything I place in Pinterest.