Recovering From A Killer Freeze 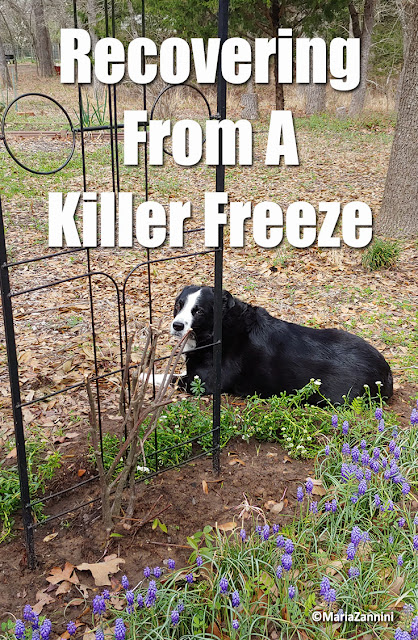 All things considered we did well. We froze (inside our home) for only two days of the ten day freeze fest. It was a miserable two days, but we made the best of it. Once we reinforced the insulation on the goat shed, all animals were comfy enough to withstand the unusually low temps.

Plumbing: We lost the outside chicken waterer. That was expected. It's never been able to withstand a freeze because it's the one pipe we can't drain the water. I'm hoping Greg will fix it this summer so it can drain like our other outside lines.

We've yet to test the irrigation lines to see if we have cracks or splits elsewhere. That's on our to do list for this week.

Plants. It's been about a month since our killer freeze. Many of my perennials seem to be coming back, but there are a few that have yet to show any signs of life. Gauras, Texas lilac, a Russian poppy, and a balloon plant. The salvias and blackberries returned to life almost immediately and others look promising. The poppy is supposed to make it, but it looks pretty pitiful right now.

After a long term freeze in a normally warm climate it's important to give plants enough time to recover. Don't throw in the towel too soon.

Gardens: I try to turn over the beds right before a freeze to expose any larva or insect eggs. We were too busy trying to stay ahead of the freeze for me to do much digging, but I got into the dirt within a week after the freeze.

I was shocked to discover only two grubs and two wire worms in the entire 24 bed garden sites. Maybe that freeze killed them off even underground. Digging deeper, I did find several earthworms, including baby earthworms so I was glad to see they made it.

Another surprise was my bed of cilantro. No cover, no protection. After the snows melted the plants looked pathetic, but one sunny day later and they all popped back as if nothing had happened.

Learned Lessons: Life would've been so much easier if we had had power instead of the rolling blackouts. We got 15 minutes an hour to use whatever electricity was needed to cook, heat, or operate electrical devices.

It wasn't enough time to heat the house. I baked a cherry pie in 15 minute increments. Stupid, I know, but we really needed that comfort food about then.

We'd been hearing horror stories from other people that their electric company sent them bills in the thousands of dollars. I was biting my nails worried about what we would find. It seems some utility companies have the option of charging a ridiculous amount during a weather crisis. Fortunately, our electric company wasn't one of them.

If we had to live through this again, I'd buy more clear plastic and more tarps. They really saved the day. I'd also buy more pre-made comfort food. I didn't see the need to buy such things when I had the chance because I tend to make most meals from scratch, but it would've helped to have a few things ready to eat.

We did barbecue an assortment of meats before the freeze hit and there were plenty of meals to be had from that--though I'll confess I got tired of bbq after a couple of days.

I didn't miss the computer or even the tv, but we desperately hated being cold in our own home. Reading was out of the question unless I could sit near a (cold) window. We slept a lot during the worst of it, and even that gave little comfort.

What's important is that no matter what life throws at you, learn from your mistakes. I (re)learned that you cannot put your welfare in the hands of government or infrastructure. You are the last on their list of interests during a crisis. I feel sorry for people who were ill prepared. If it was bad for us, imagine how they must've suffered.

Having electricity at the press of a button can vanish without warning. Some people lost water as well. Others didn't stock up on supplies before the big freeze and then it was too late because many roads were impassable.

I was grateful that several friends and family contacted us to see how we were doing. It does a lot for morale to know someone is there for you in case things got worse.

Lesson learned. If we ever go through this again, I know what changes to make ahead of time.

Angela Brown said…
Having read a post or two of yours regarding preparations for emergency situations, I had some ideas of how to tough out having to go a with no electricity for a short time...just didn't realize it would be a whole week. And it can be quite the irritation freezing in your own home for several days.

Thankfully, I was able to shuttle my daughter to a church member's home who had continuous electricity and their bill wasn't bad due to their solar panels. I stayed home with the furbaby b/c she can be a handful and I didn't want to assume she could go to their home since they had a new puppy. Plus I wanted to be ready when the so-called rolling blackouts actually started rolling instead of being completely without.

I think it was the desperation that hurt the most. Not my own, but others so desperate to do something to improve or to help someone else that they put their lives in danger, some unaware of the danger.

The icey roads where worse than a nightmare. For an area with no snow plows, roads became this ice beauty that looked inviting until you were on it and realized too late the mistake made.

I am glad you were able to get through the killer freeze without too much damage. And I am glad for people who care.
March 15, 2021 at 9:20 AM

Maria Zannini said…
Angela: I'm so glad you were able to send your daughter somewhere safe and warm.

I found it weird that some people had shorter blackouts or nearly no blackouts and they lived less than 3 miles away. I guess it depends who provides your electricity.

I heard those who lived near hospitals never lost power, but they likely also had the highest bills.

We grew up learning to drive on icy roads, but people down here have no clue. When we finally got out there were accidents everywhere.

Darke said…
I'm glad you and your hubby, and the animals are okay. I know several people (including yourself) who were affected by this, and I felt helpless. This is climate change, whether people want to believe it or not. Living in a cold climate, I can only offer this suggestion; install a wood stove. NOT a pellet stove, and insulate your home. r20 is best. It will keep the cold out and the heat in, and dress in layers.
March 15, 2021 at 12:42 PM

Maria Zannini said…
Thanks, Darke: I'm not so sure it's climate change. We get these spells every twenty years or so. This one lasted a few days longer than usual which is why we were so hobbled.

The last time we got hit with this severe a cold front was about 40 years ago. I was living in east Texas at the time so we didn't feel the brunt of it like north Texas did.

It happens. My mistake was assuming the utility companies could keep up with demand. They could not.

Mike Keyton said…
The climate changes with or without man and we adapt with it - or don't. I'm glad you did such a good job. Ref reading and daylight but cold windows, wouldn't a kindle have done the trick?

Maria Zannini said…
Mike: I've always been amused with the current rage against climate change. As you've said, it's been around long before man as evidence by ice, wood, and rock fossils.

I say we should just take care of what we've got. No need for a rally to do the right thing.

re: kindle
Alas I have a touch pad, but it was not charged in time. I should've plugged it in overnight getting whatever 15 minutes of charge time could earn it, but I was greatly distracted by more immediate needs.
March 18, 2021 at 4:42 PM