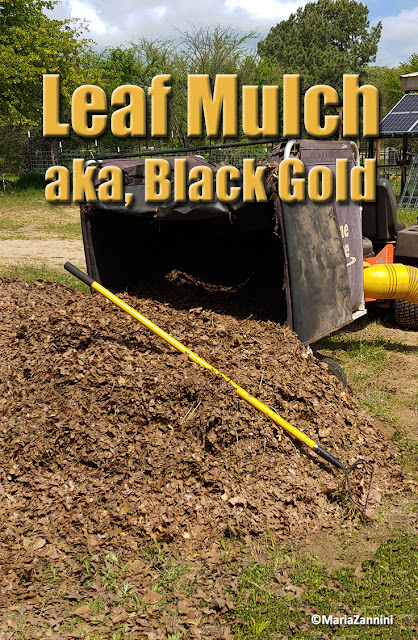 Like so many of you, every year I raked leaves. I didn't mind the process until we moved to acreage with LOTS of trees. I'd spend days to weeks, raking, moving, and burning leaves. There had to be a better way.

I always left the leaves in the heavily treed areas. It was more of a nature trail and I let the leaf mulch build up like the owners before me had done. There's no telling how deep that mulch is. It's like walking on sponges in some parts.

The front and back yards, and the areas where there are outbuildings and workshops had to be raked, just to keep it tidy.

Since leaf fall lasts for months where we live, I'd no sooner finish raking one parcel when the leaves would drop again. I'd try waiting until February when most of the leaves were down, but it fell right into the time needed for prepping gardens or other major chores.

It was time to pull out the big guns. Several years ago we bought a Cyclone Rake, a gargantuan contraption that pulls behind your riding mower that can cut, mulch and pick up a vast amount of leaves.

Even though it's efficient and simple, it's still a pain to attach (imo). But I wouldn't give it up for anything. It can do in a few hours what would take me weeks by hand. Plus with the leaves mulched, it is the single best way to keep my raised beds weed free.

The only other bad thing about the Cyclone Rake is that it's really expensive. I just saw the current price and it's gone up quite a bit since we bought ours. It's a tough machine though. We've never babied ours and it starts up first time, every time without fail.

Pros: It makes raised beds and borders neat and clean. It keeps weeds down surprisingly well.

It feeds the soil as the leaves break down.

Cons: It's hard for water to get down to your plants, but once it gets there it maintains soil moisture so you don't have to water as much.

If you don't turn your beds over before planting, leaf mulch can hide predatory larva or eggs.

I've tried whole leaves as mulch which also keeps weeds down, but I found it harder to water my plants. It also takes 3-4 times longer for the leaves to decompose. If they're mulched, they break down more easily.

Leaf mulch left to rot is absolutely phenomenal for the garden. It turns black and rich with microbes and earthworms.

I've seen so many people bag or burn their leaves, but it's a resource not to be wasted. If you have the room, compost your leaves and spread them over your garden. You won't regret it.

So far my gardening is moving slowly. I started my seeds way too late, but I was busy earlier so I have to deal with a later planting.

The good news:  I started all my plants from seeds. And all my seeds sprouted! So many that I am having to give seedlings away.

The bad news:  I've lost more foundation plants from that killer freeze in February. I was hoping my cleyeras would make it, but I think they're goners.

Do you bag, burn, or compost your leaves?

Brandy C. Jones said…
I didn’t prep a garden this year. We haven’t been able to escape the squash bugs abs they go after tomatoes, too (which sucks). Luckily my friend has agreed to supply me with tomatoes this year. Lol. I’ve always heard that leaves and grass clippings are good for your soil so we don’t bag all the time and let them mulch the ground in the fall. The only time we were constantly bagging was when we lived on base housing in Mississippi and has 12 pine trees in our yard. Ugh. To this day I can’t stand pine needles.
April 12, 2021 at 8:07 AM

Maria Zannini said…
Brandy:
Ugh! Squash bugs are the bane of my existence! I prevailed last year only because I was so vigilant and destroyed all their eggs, but it was a battle.

This year, I'm trying a new zucchini that's supposed to be resistant to squash bugs. though I don't know that I want them to regain a foothold.

re: pine needles
In east Texas we were always collecting pine needles. I miss them now because they're so good for acid loving plants. I have one lone pine tree on our property and I only scoop up enough pine needles for my berry plants.
April 12, 2021 at 8:42 AM

Mike Keyton said…
I rake and bag my leaves and give them a year in the corner to rot and compost before spreading it over the rhubarb. I was a bit wary one year because we had a fair bit of 'brown spot' on some of the leaves. Ref grass, we used to collect it in the grass box and toss it in the compost bin. Then I read it was better for the grass to cut on a dry day without a grass box and let the grass die in situ and thus nourish the soil and the next generation of grass. Seemed a bit bizarre to me, thinking of it in human terms, let the dead rot all around you but there you go

Maria Zannini said…
Mike: I imagine it depends on how tall the grass is before you cut it. If we let it grow, like in our pasture, it needs to be raked up or it'll kill the grass. Most people mow regularly enough that the short clippings shouldn't bother the lawn.

tbric said…
I stumbled across a sure fire way to get rid of squash bugs. When you notice them on the stem of your plant use a 50/50 mixture of hydrogen peroxide and water and spray directly on the infected area. I did it last year and had a bumper crop of Zucchini.
January 5, 2023 at 8:45 AM