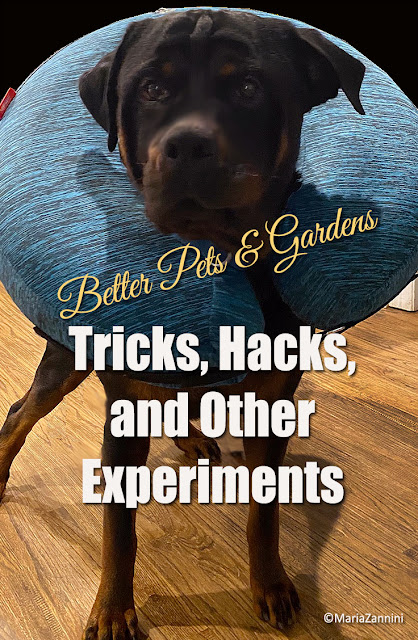 We had Odin neutered last week.

We actually learned quite a lot about this dog after his first surgery.

This inflatable donut was the best! Not only did Odin take to it right away, it didn't trigger any adverse behavior. I was shocked, fully expecting him to go nuts. (He's skitso when things are unfamiliar.) Not only did it keep him from licking his wound, but it didn't drive him crazy like a plastic cone would. An added benefit is that when he did bump into us, it was a soft bounce. Good for both of us.

We had several errands to run in the big city last week. One of my stops was to an enormous Korean supermarket called H Mart. I like to buy my fish and hard-to-find seasonings there. It's also where I get to use my favorite gardening trick.

In the past, I've bought unusual types of sweet potato, turmeric, and ginger roots and planted them in the ground. All sprouted and grew to great success. 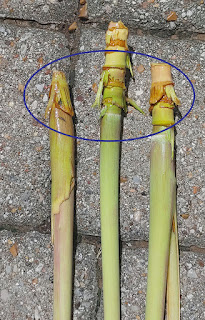 This time I bought lemongrass stalks, purple potatoes, and a small bag of soybeans. I didn't have much hope for the lemongrass. It looked pretty dried out. Yet within days it started sprouting shoots. I am going to be a happy camper if I get full plants out of these shoots.

The purple potatoes are pretty fresh but I hope they'll form eyes so I can plant them in the ground.

The soybeans were my surprise success. Soybeans, as you can expect from an Asian market are common and comes in a variety of forms and sizes. I bought the smallest bag of whole beans I could find (1 lb for 89 cents!).

I pulled a few beans out and put them in water. Before I bothered to put them in the ground I wanted to test them to see if they'd sprout. To my joy, they did! 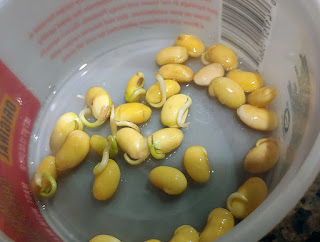 In any Western market, produce would be overly processed, cleaned, heated, or sprayed with anti-sprout chemicals. Not so with Asian markets. This is why I like to buy their produce and turn them into my starter plants.

This is a great way to try new plants and get them way, way cheaper than what you could find in a nursery or through mail order.

If you've not tried an ethnic grocery store, make the trip. You'll find a lot of delightful new smells and tastes--and some unusual ones as well. They're also your best source of produce that's not been overly processed.

B.E. Sanderson said…
Oh, no! Poor Greg! I hope both he and Odin are healing well. Yay for your new garden yummies! I don't think we have an ethnic store within an easy drive of here, but I'll keep that in mind. Thanks!
May 3, 2021 at 8:19 AM

Glad things are looking up.

Maria Zannini said…
BE: Odin had no idea what he had done. When he finally woke up he was back to his old love-bunny self.

Our ethnic grocery store is far away, but since we had other errands nearby we stocked up. Usually that's only once a year so I try to schedule the big trip in the spring in time for gardening. :)
May 3, 2021 at 8:57 AM

Brandy said…
Glad to hear Odin’s surgery went well, but sorry to hear he bit Greg. Ouch. Cats aren’t any better about those cones, so I’ll have to see if I can find an inflatable collar. Best of luck with the new plantings!
May 3, 2021 at 10:30 AM

Angela Brown said…
While I'm glad Odin took to his non-cone-of-shame, aka airplane neck pillow, no bueno on the bite. Glad to know both pup and furdad are doing okay.

Maria Zannini said…
Brandy: I could swear they had one for cats too. I'd invest in one just to have it handy. I was surprised just how well he took to it--and he's normally fussy about having things on him.
May 3, 2021 at 3:44 PM

Maria Zannini said…
Mike: Greg is still threatening me that he's going to learn to play violin. I wonder if they need their thumbs for violin...
May 3, 2021 at 3:45 PM

Maria Zannini said…
Angela: At least we know now to be careful when he's semi-conscious. Conscious or not, you do not want to be in those jaws. Greg said it took all his strength to unclamp his jaws--and he was asleep!
May 3, 2021 at 3:48 PM

Marianne Arkins said…
I got an inflatable collar for Dorothy, so they absolutely have them for cats, and I agree -- they are the best thing EVER.

RE: too old for an energetic 2 year old... I think about that often, as I'll likely be 60ish the next time we would be considering a new dog for the family (not sending that out into the universe, but just being realistic). Not sure I'm going to be up for another puppy!!

Jenny Schwartz said…
The collar sounds like a miracle! Poor Odin, though, and poor Greg! Hope they both recover fast.
May 3, 2021 at 5:30 PM

Maria Zannini said…
Marianne: I wish I had had one for Iko. He absolutely hated the plastic cone. The pillow collars are much more comfortable for pets. I'm glad I got it.

re: getting older
What's sad is that we wanted an older pet, but opted for a puppy thinking Nana would accept it easier. She did not. Rotten dog!

Of course, now Odin is way bigger than her and Nana knows it. She grumbles about it, but she doesn't try to bully him.

Maria Zannini said…
Jenny: The inflatable collar was a game changer. I wish I had known about it sooner. It makes life so much more comfortable for the pet--and the owner.
May 3, 2021 at 8:31 PM