Guineas in the House 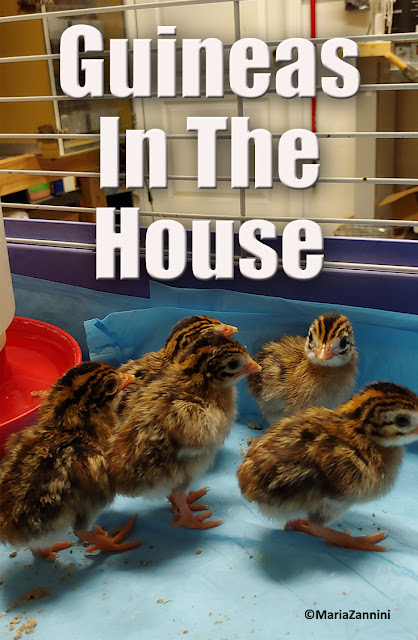 So what did I do?

I bought a dozen guinea eggs from a complete stranger and tried to hatch them.

I dislike guineas mostly because they’re noisy and I like a quiet homestead.

Guineas are great watch-birds. Nothing gets past them. One of my neighbors used to raise them every year, but she got tired of them getting run over by cars. For some reason the idiot birds never thought to fly away from on-coming traffic.

Guineas have great flying ability. The neighbor’s birds liked to taunt me from my roof, shrieking at me whenever I walked outside. I was not amused.

So why am I hatching guineas if I despise them so much? I’ve decided to bury the hatchet and see if they’re as good at tick, flea, grasshopper, and scorpion hunting as people claim. It could be coincidence but it seems our tick and grasshopper population has exploded since my neighbor gave up raising guineas.

Before I attempt chemical warfare, I'd like to see if natural methods will work. Much as I dislike noisy birds, it's better than having to spray chemicals.

I bought a dozen fertile eggs. Guineas are surprisingly expensive, as are the eggs. Out of a dozen eggs, eight have hatched.

This is my first time hatching guinea eggs so I was surprised at their slow pace at hatching. I can’t say if it has to do with how old the eggs were when we bought them, the temperature I set for hatching them, or if that’s just normal for guineas. So far it’s taken 4 days from the first chick to hatch to the last. I’ve never had a hatch take so long. Most chicks hatch within hours of each other.

I’m hoping I’ll have a good ratio of hens to roosters and raise my own for next year. Since we have a high predator population—never mind the traffic—I want to raise enough guineas to make up for the inevitable losses while they roam. 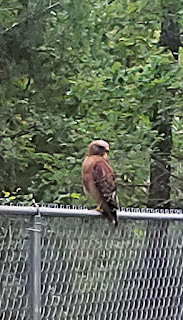 Speaking of predators, a trio of red tail hawks have called our home, their home. This one decided to play lookout from the dog run.

Every so often Jammy, the cat slips into the dog run to sun himself, so I need to be especially vigilant now. After all I’ve done to keep that cat alive, I don’t want him to fall victim to these hawks. They’re bigger than he is!

For those of you keeping tabs on Jammy, he’s doing great. He can only eat smooth (lickable) food because his esophagus is too scarred and narrowed. Poor little guy misses his kibble. Every now and then he tries to steal a piece from the dogs, but he can’t keep it down. It’s mush forever, buddy.

I've got a regimen of four different foods he can eat, plus homemade food that I emulsify to a smooth consistency.

He’s in fantastic shape despite the months of recovery, and has even gained an extra pound. I just don’t want him to sneak out and become hawk bait.

He misses the dog run, but he knows it's off limits now. If there are bugs, there’s Jammy trying to hunt them down—which is what got him into trouble in the first place.

Life is back to normal at the homestead. Why I wanted to complicate it with guineas shows a lack of good judgement I think, but it seemed the lesser of two evils. It was either noise or chemicals.

That's a tough call when you have Vulcan hearing, but maybe I'll get used to it. Don't laugh! It can happen.

Brandy said…
Glad to hear Jammy is doing well. We have one cat that can only eat mushy food due to a tongue fissure and his teeth had to be pulled due to stomatitis. (We have 3 cats with this.) Pate cat food is a staple in our house, too. With Tiki Cat mousse thrown in for a treat. A friend raised those little birds. She always complained about the rooster, with affection, and the size of the eggs they had. I thought they were cute.
I hope things go well with them.
May 24, 2021 at 8:26 AM

Maria Zannini said…
Brandy: Jammy is a survivor! I honestly didn't think he'd make it, but I did my best to support him until he was able to rally on his own.

He is such a sweet, sweet boy.

Stacy McKitrick said…
Glad to see Jammy is doing well. And I hope the guineas work out well enough that the noise isn't bothersome.
May 24, 2021 at 9:30 AM

Maria Zannini said…
Stacy: I'm hoping if the guineas realize we're the good guys, they won't squawk as much. They only screech at strangers as far as I know.
May 24, 2021 at 9:48 AM

Maria Zannini said…
Mike: Guinea is a flavorful meat, but I don't remember much else as I only had a small piece.

As for hypnotizing I doubt I'll ever catch one to find out. I do hope my constant presence will make them less afraid of me.
May 25, 2021 at 6:44 AM