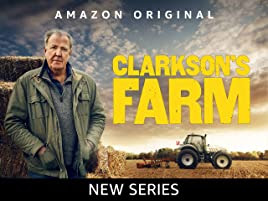 We've had periods of prolonged rain, then prolonged heat, followed by exhaustion while we hustled to get one job or another done in between these two extremes.

Somewhere along the way, we stopped (to recuperate) and binged on Clarkson's Farm. Amazon thought judging by our previous selections that we might like this one. It was right!

At first glance, I didn't think I would like it. It's about a loud and colorful Englishman who decides to farm his own land after his resident farmer retires.

I have a weakness for loud and colorful men having married one myself. 9 times out of 10 such men have incredibly soft hearts underneath all that bearish bluster.

Such is the case for Jeremy Clarkson. For all his exuberant exaggeration his heart seems to be in the right place. He wants to do what's right for his farm, his workers, for nature, and for his community. After watching all eight episodes, he definitely didn't do it for the money. I can empathize.

It's billed as a documentary, though I suspect it's part reality show and part documentary.

Clarkson, apparently is well known in the UK as a motoring journalist and presenter. He's opinionated and audacious. Not a personality for weaklings. I imagine he'd cook them up for sausages.

I'd never heard of him, but I'm glad I know of him now. At first I didn't think the premise would appeal to me. This is about a man who owns 1000 acres of farmland, woods, and streams--a celebrity in his own country. There is nothing remotely relatable to me.

But from the first episode he had me hooked. With each dilemma, he came up with a solution, though not always a well thought-out solution.

It was his shortcomings that endeared him to me. He tried. Although he had no experience in farming, beekeeping, sheep, shop keeping, or driving tractors in the mud, he tried. It helps that he also seemed to have more money than God.

I can't fault a man for trying. We all have to start somewhere. At least he had the good sense to hire people who knew what they were doing and kept him from mucking things up too badly.

Sadly, Clarkson couldn't have chosen a worse year to venture into farming and sheep. That wasn't his fault. Between bad weather and Covid, he managed surprisingly well. He didn't make any money, but he didn't sink either. Considering it was the year of Covid, to me that's a win.

The people Clarkson hired along the way were a big part of his success. It was a thing of beauty to watch the shepherdess, Ellen, handle the sheep. His farming "coach" and helper, Kaleb, for all his youth was a fount of farming knowledge. Made me wish he was my kid.

Neighbor and fellow farmer Gerald was a bit tiresome, but only because you couldn't understand a word he said. On the other hand, he's probably forgotten more about farming than Clarkson will ever learn.

Speaking of the neighbors. although it wasn't brought up during filming, I imagine his neighbors couldn't have been too happy with him. His celebrity status drew the crowds to his shop in droves on opening day. Good for business, but I'm sure it upset the quiet equilibrium of village life.

There was one last bit I discovered through the course of this series. Beautiful as it is, I've decided you couldn't pay me to live in England. I thought bureaucracy was bad in the US. The UK has its hand in EVERYTHING. Talk about Big Brother!

There is only one season available. 8 episodes. The entire season is beautifully encapsulated in the first five minutes of Episode 1. It gives you a taste of what's to come. Prepare yourself for a lot of cursing, but if you already raise animals or farm, you're already well versed with cursing.

Here's the trailer if you'd like to take a look.

Have you seen this show? Am I the only one who's never heard of Jeremy Clarkson?

If you don't already have Amazon Prime, here's your hookup.

Jackie said…
Some weekend I am going to give it a go and judging by your comments enjoy the first season.

UK has never been on my bucket list of where to live for exactly the reasons you shared Maria, also since no relatives there not a place to visit either.
July 12, 2021 at 1:27 PM

Maria Zannini said…
Marlene: We weren't expecting to like it. For some reason, Amazon put this as a 'Watch Next' show so we checked it out. His neighbors and workers cut him no slack despite his celebrity status. It was great fun.
July 13, 2021 at 6:31 AM

Maria Zannini said…
Angela: Apparently he's a celebrity in the auto world. He races some exotic cars. Somehow I can't imagine a man that big racing, but that's what he's known for.

I would love to visit England. It's on my bucket list. But to live there, no. CCTV cameras everywhere, and the government gets into every cranny of your business. Even the US isn't that bad.
July 13, 2021 at 6:36 AM

Mike Keyton said…
. Even the US isn't that bad. - yet.
I know what you mean. Clarkson was one of the BBC’s great assets because he was politically incorrect and people loved him for it, and he was effectively dismissed from the BBC for that same reason. Shot themselves in the foot blinded by dogma. Their loss, Amazon’s gain
July 13, 2021 at 12:33 PM

Maria Zannini said…
Mike: There is always a yet. Hopefully that will happen after I'm dead--or too senile to care.

I didn't know that about Clarkson. He was very entertaining! We loved the whole series.

Mark my words, there's going to come a time when all this political correctness is going to come back to haunt us and repay us for this folly.
July 13, 2021 at 4:40 PM