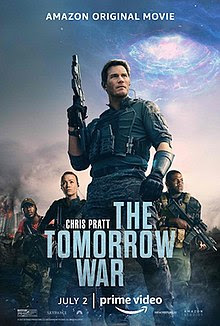 There are a lot of critics for The Tomorrow War. Many calling it a compilation of every sci fi alien film before it.

I watch and read a lot of sci fi. Trust me when I tell you that there aren't a lot of novel ways to introduce new alien bad guys. The Tomorrow War did but they didn't give away the twist until the very end.

For those who haven't seen it, I'll say no more on that.

The one part that is hokey is how a handful of our descendants come back thirty years to the past to ask for our help. Asking for help isn't the hokey part. It's the fact that anyone in the current global political arena even believes them or wants to help.

But that's neither here nor there. Every story is allowed one throw away plot point.

The premise is a little convoluted. If time travel theory confuses you, this probably isn't the movie for you.

It's present day and we're all celebrating soccer and Christmas. In the middle of a soccer game, the time travelers appear magically and ask for help.

Somehow the world leaders are convinced and a worldwide draft is instituted to send people to the future to fight a war that we are losing.

Pay close attention to who is being sent to the future. These are people who are already dead thirty years in the future. This way they won't meet their future selves. Same goes for the future people that visit us. They're all quite young which means they hadn't been born yet in our time.

It's basically a war of attrition because we have virtually no chance of winning. The aliens are too relentless and too many. All we can do is slow them down until we can find a serum that will kill them within seconds.

Enter the hero, Dan Forester (Chris Pratt), ex Special Forces. He hates his father for leaving the family when he was a child and swears he will never be that kind of dad. But as I like to say, careful what you wish for.

The most interesting character in the film is in fact Dan's father (played by JK Simmons), former Viet Nam vet, later nicknamed Conspiracy Santa. He is a badass! And for 66 years old, he's more buff than most 20 year olds.

I suppose what makes him even more surprising is that Simmons has also played the mild mannered Farmer's Insurance spokesman. That's acting, folks!

The Tomorrow War is not some deep intellectual film. It's a summer popcorn movie. Watch it for what it is and don't overthink it.

The aliens are awesome. They are the perfect killing machines. And the matriarch is even more alpha than the original alien in Alien.

The best scene is actually near the end when you learn the depth of their species' resolve.

This film is only available on Amazon Prime and free. If you have Prime, put it on your queue and pop up some corn. If you aren't on Prime, here's where you can join.

Have you seen The Tomorrow War? What was your take?

It was exactly what thought it would be and even a little more than hoped for at certain moments.

Mike Keyton said…
It sounds like my kind of film. Is it out on DVD? I have an Apple music subscription which I value greatly. Not too sure I can afford Prime as well or consider swapping the Apple music catalogue for that of Amazon. First world problems and a film I may see in the future.
July 26, 2021 at 3:01 PM

Maria Zannini said…
Jackie: I was surprised at the quality of the film making. The beginning was a little disorienting, but once I got my bearings I enjoyed it.
July 26, 2021 at 7:15 PM

Maria Zannini said…
Dru: It was a spur of the moment decision to watch it, but I thought it was pretty good for an in-house production.
July 26, 2021 at 7:16 PM

Maria Zannini said…
Mike: I don't think it's out on dvd. You might consider getting Amazon's 30 day free trial and then cancel afterward.

This winter we might add Disney+ so we can catch all the Marvel add-on series they're producing for streaming. I've heard nothing but good things for the Marvel universe shows.
July 26, 2021 at 7:19 PM

Luba said…
I saw it on prime, Maria and I agree with you. I loved the CGI as well. Have you seen Monster Hunter? Another good Sci-Fi movie to watch. It stars Milla Jovovich. Good movie. Let me know if you if you do and what you think.
July 29, 2021 at 5:10 PM

Maria Zannini said…
Luba: I haven't seen Monster Hunter but it sounds like something we'd like. I put it on my Watch List, but right now Amazon is only selling it, not renting it. As soon as they do, we'll add it to our queue. Thanks for the rec!
July 30, 2021 at 8:11 PM