Dodgy Knees On The Homestead 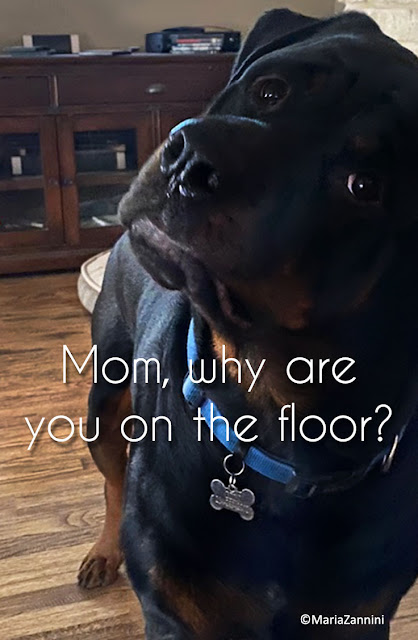 Greg and I have an ongoing bet on which one of us will break a hip thanks to Odin. I almost lost!

I had just finished feeding animals and decided to pop into Greg's study and let him know I was going to take a shower.

Odin, he who rampages like a herd of elephants, saw me heading for his door and tried to get there first, knocking me flat on my pride. Unfortunately, he hit the side of my knee like a Mack truck.

As God as my witness, I thought he broke it. I lay there crying, unable to get up. Greg rushed over and had a hard time pushing Odin away. I don't think Odin realized he had hurt me, but since I was crying, he wanted to shield me with his body. That only made things worse.

I think what happened is that he popped my knee out of joint. As soon as I tried to move it, it popped back in. Hence, the agony.

I was out of action for several days, but today I can walk without a cane.

Odin is relieved he's not in trouble anymore.

Greg is relieved he doesn't have to be at my beck and call.

We've been working steadily around the homestead for the last few weeks. We had several large trees to take down in a very tight location. And we've had an assortment of chores including replacing two storm doors, fixing the riding mower, and moving a lot of brush for an enormous fire.

There were piddly jobs too like mucking out pens, cleaning cages, turning mountains of compost, and giving the goats manicures. Tedious, but necessary.

We are very, very careful. Not like the old days when we used to take our chances. Nowadays, we plan every step before execution. Felling the trees was planned like solving a geometry problem.

Those trees dropped exactly where they needed to fall--without hitting us, buildings, or fences. Greg is the architect, but I'm just the beast of burden. He tells me where to pull and what to lift.

Nature is a funny beast though. Even when you plan for contingencies, things can and do go wrong. That's what makes it scary.

Sometimes I wonder how we manage at our age. In my whole life I've only ever known one person (our age) who worked the kind of jobs we do on a regular basis. We are reaching a point where we do hire help for the most dangerous jobs like roofing and HVAC work.

I always give Greg the option to decline a project if he feels the job's too big for us, I don't mind in the least farming it out. Better to spend the money than break a hip.

But Odin! That dog is going to pummel us to death with love. He really should live with a jogger or a power lifter. Instead the poor boy is stuck with old people...with dodgy knees.

Have you ever had a rough and tumble dog?

Marianne Arkins said…
I say all the time that I'm going to die from being tripped on my way down the stairs. The dogs ALWAYS have to be first, no matter what. It's a miracle I haven't broken something.

Angela Brown said…
Oy! I can remember having my knee pop out of joint before and thinking I'd have to give the whole leg up I was in so much pain. You have all the empathy, sympathy...all the -pathies!

Bless Odin's bulldozer-dog heart. He loves ya'll so much and just doesn't know how to show it without all his brute strength.

Jenny Schwartz said…
Close call! Glad your knee popped back in. Dogs just don't know their own strength! and then, they're all worried and sticking their wet nose in to check why you're crying.
August 23, 2021 at 5:25 PM

Maria Zannini said…
Marianne: I'm hoping with time Odin will calm down and won't see everything is a race. Like all dogs, he thinks he's going to miss something if he's late.

Maria Zannini said…
Angela: That was excruciating! Holy moly. I didn't think anything could hurt so bad. I lived on ibuprofen and ice packs. I think the ice helped the most. That and staying off that leg.

Maria Zannini said…
Jenny: You're right! They don't know their own strength. Odin is like a little kid, 120 lb kid with muscles like a body builder.

Luba M. said…
I'm glad you're okay, Maria and that nothing broke. I love how Odin tried to protect you afterwards. Dogs really don't like to see their mom's cry. A very cute fur baby. It sounds like you're very busy these days. So nice reading your post. 💜
August 25, 2021 at 4:52 PM

Maria Zannini said…
Luba: We try to be cautious around that dog because he's still in hyper puppy stage--but sometimes we let our guard down.