State of the Homestead, Summer 2021 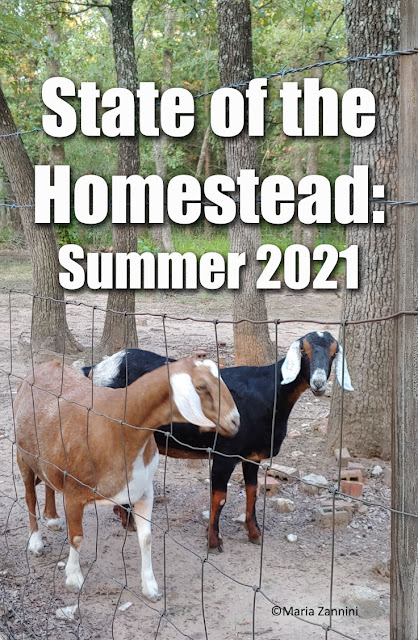 I haven't done a homestead report in a while. Things are changing around Casa Zannini. It's a case of letting go of certain responsibilities and rethinking how we want to live out our "golden years".

I never quite understood what makes retirement golden. I certainly work harder now than when I worked for da man, though I'll admit it is less stressful.

We've been streamlining our homestead for the past couple of years. Less animals and better equipment so we don't have to work so hard. This year will be the final push to live more simply.

Chickens: We have 11 chickens. One rooster and ten hens. That's five hens too many. We get so many eggs I'm feeding them back to the chickens. The Ameraucana have been spectacular layers, but this particular flock are oddly picky about feed. Past birds would eat nearly any greens or human food leftovers, but these guys act like gourmets. Only the more expensive chicken chow, please.

When it comes time to replace this generation, I'm going to spend more time varying their diet when they're chicks.

Guineas: Ah, the bane of my existence. Have I mentioned how much I hate guineas? They're an experiment. We bought 12 'fertile' eggs from a seller and eight hatched.

The guineas are even pickier than the chickens when it comes to food. They won't touch scraps and only occasionally nibble on greens. They want insects--which is why I'm raising them. But rather than letting them loose and getting nabbed by coyotes, I want to raise a second generation for insect control. This way I have a way to replenish them if the hawks or coyotes get them.

Speaking of coyotes, one of my neighbors lost a goat to a coyote. Coyote attacks are on the rise this year. Lots of pets and livestock going missing or remains found.

Quail: Still my favorite livestock to keep. They eat very little, incubate quickly, and grow to eating size within 8 weeks.

Goats: The full size goats will have to go. I will miss Brownie the most. I'm hoping I can find a good home for them, but once they leave your farm, you can never be sure. I desperately want them to be safe and in experienced hands.

The Gardens: We had the WORST gardening year in memory.

Shockingly, my tomato plants were duds! And a new-to-me squash and okra were dismal performers. The cucumbers, peppers, and black eyed peas are doing well though. The soybeans (so far) are also full of pods.

I left the cabbage and brussels sprouts in the ground too long making them a little 'hot', but I'll try again in the fall with them.

My blueberries got gobbled by birds, but my elderberries produced a bounty. I'm going to try making jelly and an elderberry tincture (with vodka) as a medicinal.

I think most of my problems were the result of timing. Once crematoria sets in, there's no point in planting unless you provide shade.

da Dogs and Jammy the cat: Nana and Odin are doing well. Nana still growls at Odin, but since he's so big, she doesn't do much more than grumble. Odin is a big goof. Just a kid wanting to play. He turns two this Friday.  Odin is dangerous--not because of his bite, but because of his speed and size. He is by far the fastest and most powerful dog we've ever owned. It's like getting hit by a train. He doesn't do it on purpose. He's just an oaf.

Jammy is doing okay despite his eating disability. Nana has started chasing and biting him so they're no longer allowed together unless Nana is under my direct control. She can't be trusted. I don't know what's made her turn aggressive, other than the fact she can no longer bully Odin so she's starting on Jammy. She's a rotten dog. Good thing we love her.

Greg and I are okay. My spidey sense has been tingling lately and I told Greg it's time for us to isolate for a while. We've gone back to wearing masks in stores, but it's time to take it a step further and stick close to home for a few weeks.

We've had several good friends die recently. One after another. Most died of old age. Greg's best friend died from a long term illness. And one good friend died from complications of covid. He was a smoker and overweight so he was already fighting a stacked deck.

It doesn't matter what gets you. You don't want to see your friends die.

On the bright side, my mom is almost 90 and healthy as a horse despite her jet-setting ways.

Since I don't think we're as lucky as my mom, we're stepping back from the world.

If you haven't stocked up on essentials, do it now. Just in case. The price of all food has gone up. I'm really bummed about that.

How's it going at your end? Have you tried anything new or different this year?

B.E. Sanderson said…
I love reading your homestead updates. Thanks for sharing.

Just as I was reading about your guineas, the two wandering neighbor guineas started a racket in our front yard. I've named them Laurel and Hardy. They're loud but they make us laugh, so no worries there.

Things are going fine over here. Still struggling with the container garden, but it's a learning curve. Next year will be better.
August 9, 2021 at 7:42 AM

Maria Zannini said…
BE: I wish I had done some vegetable container gardening this year. I did flowers this year--all new to me flowers--some did well, others were so-so.

re: guineas
It must be me. My neighbor's guineas loved her. My guineas treat me with an air of disdain. They won't eat their food until I leave their pen. Ingrates!
August 9, 2021 at 8:41 AM

Madeline Mora-Summonte said…
I'm sorry to hear about your friends, especially Greg's best friend. That has to be rough.

Maria Zannini said…
Madeline: A good friend (ironically, also dead) once told me that once you get to a certain age you have to invest in a funeral suit because all your friends start dying.

Mike Keyton said…
My sympathies to Greg. I check on old friends on a regular basis just to see who's still on the mantelpiece, and probably know more people in the other place than people in the here and now. But that's how it is.
I hope your glide-path to an easier life proceeds smoothly and with your usual efficiency.
August 9, 2021 at 10:00 AM

Maria Zannini said…
Mike: The older we get, the more we lose friends. It's inevitable.

Jenny Schwartz said…
Big (((hugs))) virtual and therefore safe! Change is hard, and losing friends is awful. All my sympathy.

For a wonder, we've actually had rain this winter! No more drought. I'm sure this is a temporary blessing and conditions will return to the new norm of arid, but for now, everything is green. LOL the weeds are flourishing!
August 9, 2021 at 5:33 PM

Maria Zannini said…
Jenny: Even when we have too much rain, I'm grateful for it. LOL.

And how is it the weeds rally before usable plants?

Gwen Gardner said…
Thanks for the update, Maria. Your state of the homestead is always interesting. I’m glad your pets are well even though they’re not playing nice!
I still mask up while grocery shopping and we don’t really go out yet, even though we’re fully vaccinated. Just seems like we’re in for another round yet. I’m so sorry for the loss of your friends. Hang in there <3
August 9, 2021 at 10:58 PM

When I think about how Nana was a year ago, it's still an improvement. At least she and Odin can be in the same room now. Maybe she'll get over the chase instinct with time too.

I blame television. Whenever she sees one of those wildlife shows where a lion nabs a wildebeest, she goes wild with glee. Bad girl.
August 10, 2021 at 6:44 AM

My condolences for the friends and neighbors recently transitioned.

I was hoping you could share the inside scoop on the "golden" part of retirement.

Sounds like Odin is a big old stocky darling with a heart for play while Nana is still being Nana. Glad Jammy is still doing well.

I hope things work out better with the garden next go round.

Please continue to take good care of yourself and hubby. While I enjoy your posts, you - the person - matter loads and loads more. :-)

My Data Science fellowship and starting a new job pretty much hijacked my spring and summer. Now things are kicking into gear with my kiddo starting her Senior year in high school and having to prep for graduation and college.

I hadn't realized you started a new job. With chaos comes opportunity though. And these past two years have been anything but stable. I hope this is the next leg to more money and more job satisfaction.