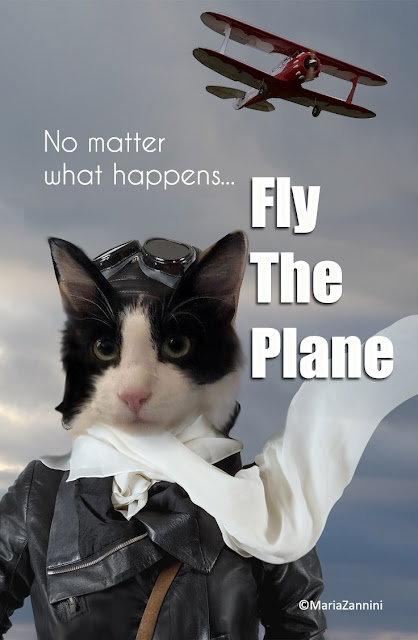 I've been having nightmares of late. I'm talking Rod Serling Night Gallery type nightmares. I wake up with my heart racing, then a sudden flood of relief when I realized I escaped whatever horror my weird brain thought up.

My problem is that I worry about everything, including how Greg would manage if I died suddenly. He doesn't have a clue what I do for everyone behind the scenes. The few times I've been injured and off my feet it was like watching a circus of monkeys.

At that point I try to look the other way and hope for the best. When I go to bed, it gnaws at me. It's either insomnia or nightmares.

There have been times in my life when everything, and I mean EVERYTHING kicks me in the teeth.  My pups/cat are sick, the husband has a life threatening disease, my mom or siblings are struggling with dire emergencies, appliances break, there's a tornado on the way and the goats just busted the fence.

Tell me you haven't faced something similar.

That's why one particular pilot's adage became my mantra.

Decades ago when Greg was taking flying lessons his instructor gave him a piece of advice that struck a particular chord with me.

No matter what happens, fly the plane.

Parts can fall off, gauges can stop working, and the plane can be on fire. It doesn't matter. You fly the plane.

It means you do whatever is necessary to keep the plane from spiraling out of control.

Whenever I'm under a lot of pressure, whenever life becomes painful, unbearable, or just plain stupid, I fly the plane. Head down. Eyes on my work. Staying the course no matter what comes next.

I know for certain that eventually I'll enter calmer skies, but I might get beaten up before then. That's life. No one gets out of this without some scars.

Live long enough and you'll earn quite a lot of scars.

Sometimes even when you know there's a storm ahead, there's no place to swerve. All you can do is grit your teeth and fly that damn plane.

I don't know why I'm having such horrific nightmares. It's like my brain is trying to tell me something that I can't visually see yet.

Right now my biggest worry is Jammy, the cat. I think he's losing weight again. I've upped his calorie count to see if that helps. He seems content, and everything looks normal, no fever, no parasites, but I can tell he's lost a few ounces. I'd like to nip this in the bud before it gets worse.

It would help if I could vary his diet, and not keep him on food the consistency of pudding, but that's all his little body can handle. I feel so bad for him. I wish I could explain his disability to him. He's a brave little cat and he trusts me even if he doesn't understand.

Deep down, I know he won't have a very long life, but me and Jammy will keep flying that plane for as long as we can.

Any advice from cat owners? I'd blame it on the heat, but he stays in an air conditioned house.

Have you ever had nightmares several nights in a row? Do you try to figure it out or write them off as one of those things?

Lynn said…
When Jericho was losing weight (always a problem when he got older) I would feed him warm scrambled eggs a couple times a day. Not a lot, just one or two in between meals. It helped that he loved them.

Being on auto-pilot isn't a bad thing in the short term. I think it relieves some of the stress to just fly instead of think about how you're flying, where you're flying, who's got the plane if you can't fly, etc. But you need to do some self-care, too. Be nice to yourself in some small way every day, and forgive yourself for not being perfect or even perfectly able to solve every problem and divert every crisis. You're awesome, Maria, but you're human, too.
September 20, 2021 at 11:32 AM

Maria Zannini said…
Lynn: I think I'll try experimenting with eggs and see if I can emulsify it enough that he can swallow it. He did like eggs back when he was normal.

Angela Brown said…
Hugs to you and Jammy, the cat. I hope Lynn's suggestion about the warm scrambled eggs works out.

Mike Keyton said…
Keep on flying is good advice, so to Doris Day's Que Sera Sera. Dreams are strange things. My recent dream of note was of a large uprooted oak tree, its roots tangled in air. Go figure, as they say. I do hope Jammy is with you for some time yet. It will hurt you when he's gone -- like my mind. I could have sworn I posted a comment yesterday. I probably forgot to click on 'post'. I have these doltish traits

Maria Zannini said…
Mike: Doris Day and I have a love of animals in common but we differ on accepting fate. Ha!

I'm a student of dreams. I like trying to figure out what they could mean since many times in the past I've solved a problem or averted a tragedy by interpreting them.

One that comes to mind is that I'm walking my property and discover another set of pens with animals I had forgotten about. They're dying of thirst or hunger and I'm rushing around trying to save them.

Almost always it's a sign that one of my animals is about to get sick. It's helped me to look for trouble before it becomes untreatable.

I'm at a loss about your oak tree. I imagine it all depends if it looks healthy or is dying. Oak trees are a sign of strength, but without roots in the ground is it still strong? Only you can answer that.
September 21, 2021 at 6:57 AM