Is a Solar Generator Worth the Money 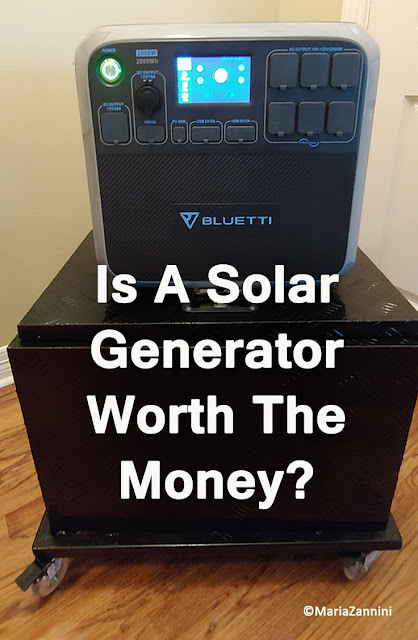 I was going to save this post for the winter in memory of the ten days of brutal cold in our normally warm part of Texas, but since we're in the midst of hurricane season, now is just as pertinent.

During those ten days of rolling blackouts when we were unable to heat our home, we were left with a conundrum. In order to run our gas powered generator, we'd have to take all our power offline and simply run one or two appliances. Our other problem is that the generator had to be left outside to avoid carbon monoxide poisoning.

We've used our gas generator in the past mostly due to hurricanes and once after a tornado wrapped a metal building around the transformer that fed our power. They're handy devices, and life-saving if you're in dire circumstances.

Gas generators are relatively inexpensive (compared to solar generators). You're looking at somewhere between $600-$800 dollar price range for a decent sized generator. They also tend to handle more wattage, so keep that in mind too. The downsides? They're noisy, use gas, and require more maintenance.

Solar generators are a bit higher. Our Bluetti cost $1700 for a 2000 watt generator. (That's for the generator alone. I'll get into the extras later in this post.

You can get them quite a bit cheaper for lower wattage but first figure out what you need to power. One space heater requires 1500 watts of power. Depending on the appliance or electronics, you could use anywhere from 50 watts for a small tv to 5000 (running) watts for an air conditioner.

If you're not worried about having cold air or heat, you can probably get away with a 1000 watt generator to power most appliances. There are a lot of charts on Google that give you watt usage. Here's one.

Solar generators can plug right into your outlet to charge its battery. But to sustain that power you have to hook it up to solar panels for indefinite power. This is where the extra expense comes in. The Bluetti solar panels cost an additional $500.

To be fair it's light, folds neatly, and is completely transportable.

We went another way. Since we had extra solar panels sitting around (the heavy kind), Greg wired them to each other. Then we bought a rolling cart that can store and transport them in place. Since we'll only use them around the home, it's easy to roll them around to wherever the sun is.

You'd think that would be the end of our cost, but we went one step further. Since it's such an expensive piece of equipment, we decided to protect the solar generator from lightning strikes, solar flares, or God forbid, some disagreeable government detonating a nuclear weapon (EMP).

We bought a metal tool box that houses the generator. In essence, it's a Faraday cage. The box is lined with a rubberized mat (we used a yoga mat) to protect it from touching the metal directly. Google "Faraday Cage" to make your own. It's as simple as using aluminum foil or even a metal trash can, but we wanted ours to look nice which is why we bought a ready made, heavy duty tool chest, tall enough to hold the generator.

The one we bought is not currently available, but this is a similar one in silver.

To make it easier to move the filled box, Greg also custom built a rolling tray so we could wheel the generator anywhere with no effort at all. (Note the floor friendly wheels in the photo at the top.) The whole box fits neatly in a hallway closet. Free of dust or dog drool.

The generator is a bit heavy. Shipping weight is about 60 pounds. One person can lift it, but two people makes it easier. Putting it on a rolling tray (or cart) makes moving it a breeze.

If we could afford a second one or better yet, a bigger one, I wouldn't mind making the investment. It's far cleaner and more fuel efficient than a gas generator.

I'm normally all about living frugally, but sometimes a big investment is necessary if we want to keep our appliances and electronics working.

We've had our generator for over two months. We charged it to 100% and it only dropped 1% during its two month storage.

A generator isn't something we've use often. But if you've had to manage without power for more than a day, you are beyond grateful. Having lived through multiple hurricanes, ice storms, and tornadoes. It's been a godsend.

Other people use solar generators far more regularly if they camp or vacation in recreational vehicles (RVs). Contractors also use generators (gas and solar) to run power tools in remote locations.

The reasons for owning one are varied. Only you can decide if it's worth the investment. For us, it's peace of mind knowing we won't need gas to run our generator. I'm happy with ours.

the author said…
We've had a gas-powered generator that we've used multiple times during hurricane season outages. It's pretty powerful, too. After Irma knocked out our power for nine days it kept our fridge, water heater and well pump working, and provided electricity for the kitchen.

Aside from what you mentioned, the biggest drawback for us is storing enough gasoline to use it for long stretches. We shared some of our gas with neighbors after Irma so they could get to work (why does no one fill up their car before a storm but us?) so we ran low about halfway through our nine-day outage. It took a whole day of driving around to find a station that still had gas to sell in our rural area -- which wasted more gas, of course.

All we really need after a hurricane is power for the fridge and water to drink, bathe with and flush the toilets. We can cook on the grill. It might be that this size generator would work for us. I'll ask my guy to look at your post; I think solar might be a better alternative for us. Thanks for all the helpful info, Maria.

Lynn Viehl said…
That comment was from Lynn, btw. Blogger is doing something weird with my identity this morning.
September 6, 2021 at 11:33 AM

Angela Brown said…
Re: Our other problem is that the generator had to be left outside to avoid carbon monoxide poisoning.

During those days of the snowpacolypse, have no electricity in a home where all the appliances run on electricity was a living nightmare. The desperate measures some took to keep warm did not end well and your point about the CO poisoning was a hard lesson learned.

The idea of getting a generator for our small half of the duplex we're renting has moved up on my list if things in which to invest. Thank you for sharing this information as I consider what ai want to do.
September 6, 2021 at 12:02 PM

M. K. Theodoratus, Fantasy Writer said…
Sounds like the technology needs needs to be lots more convenient. But I can see where it can be a life-saver. [I'm glad our electric utility buried our lines. We mostly worry about back-yard diggers.] -- Stay safe. Sounds like you might face a roller coaster ride yet this year.
September 6, 2021 at 1:01 PM

Luba Meader said…
Since last year's Derecho, I bought a generator the gas powered one. I probably would have liked to have a solar powered one, if I only looked into it. Too bad I didn't know about one at the time. I guess when a something like that happens, we react too quickly. Loved reading your article, Maria. Happy Labor day to you and Greg.🇺🇸
September 6, 2021 at 1:18 PM

Maria Zannini said…
Lynn: I'm glad you wrote back. I was racking my brain trying to figure out who 'the author' was.

Rita is the one that took us out. Fortunately, we planned ahead. Greg left mere hours before the hurricane struck. When he reached me in Dallas, we hunted high and low for gas containers. We couldn't find anything in over a hundred miles in any direction. I mentioned it to a coworker and her church not only gave us gas cans, but gas as well. They refused any payment. I sent him ahead with 7 five gallon containers in a cargo container outside his truck. I followed two days later after he could assess the damage.

If it hadn't been for that church's help we would've been powerless for days. By the time he used up his gas, the pumps were working again. Long lines, but there was gas.

Greg could explain the solar generator's capabilities better than me. If Edward is interested, let me know and I'll send you Greg's email and they can talk.
September 6, 2021 at 3:53 PM

Maria Zannini said…
Angela: That is a huge drawback to gas powered generators. They're stronger, but you really have to take steps to stay safe.

I mentioned to someone on FB that the solar generator is a good alternative for me since I'm not particularly mechanical. If the gas powered generator needed maintenance I'm not sure I'd do a very good job. When you're in a bind you don't have time to learn on the job.

In the back of my mind I'm always looking for options in case Greg died or became incapacitated. After what happened to my sister's husband, it's a sobering reminder that sometimes you have to manage everything alone--as I'm sure you know too well.
September 6, 2021 at 4:00 PM

Maria Zannini said…
Luba: There's nothing wrong with gas powered. They're much more powerful than a solar one. It's the maintenance that bothers me.

When Rita hit, Greg hadn't run our old generator in years. It took some tinkering to get it started, but on the third pull it came back to life. It was an old generator, but not something I want to deal with alone in an emergency.

Greg knows lots of tricks to get machines working. I only know how to use pointy sticks and buttons. LOL!
September 6, 2021 at 4:07 PM

Maria Zannini said…
Mike: I imagine the chances of hurricanes, tornadoes, or ice storms are slim in Wales.
September 7, 2021 at 7:24 AM