Easing Away From Farm Life 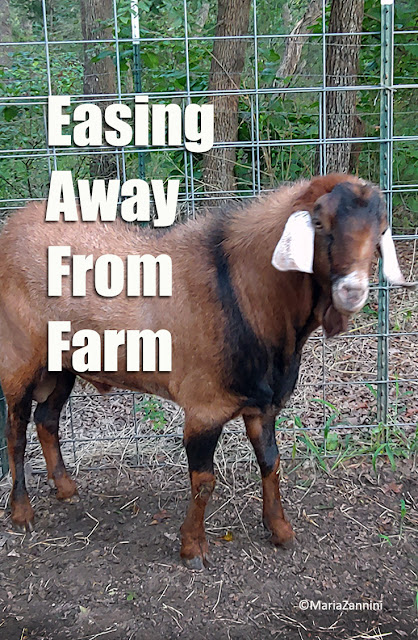 Last week was a mixed bag of emotions. We had decided months ago that it was time to let the goats go. We were still able and willing to tend them, but we could see the writing on the wall. Would we still be able to trim hooves, medicate an unwilling animal, or corner and capture a big animal as the years went by?

My biggest fear was that my goats would go to someone who would mistreat them. Fortunately, there was a man who asks to buy my baby goats every year. Just as we were pondering what to do he texted me again for the year and jumped at the chance to buy my adult girls. He didn't need the buck.

Rather than face Craigslist with endless spammers, I decided to put the buck in the freezer. That was another arduous task, but as fate would have it we got another text from a niece who was interested in learning how to dispatch and butcher a large animal. Extra hands are always welcomed.

She came down and we taught her what we knew about dispatching and butchering. I think she went away knowing that it was a much harder task than she anticipated, but it also gave her some valuable information in case she ever had to do the same. I sent her home with as much frozen meat as she could carry. Amazingly, airlines allow you to carry meat as long as it doesn't leak during the journey.

I have to admit I've been very sad since losing the goats. I really miss them. Their pens look so empty. We've discussed putting ducks or geese out there, but it's a risk. The fence has barbed wire on top so it should keep coyotes out, but it won't keep raccoons out. Geese might have the best chance of fighting off a raccoon but only after they reach adulthood.

I guess I could concentrate on creating a food forest and adding more natural habitats for wild animals. I would like to put up some housing for owls, bats, and bees. There are a couple of owls that like to serenade me right outside my bedroom. LOL! I wouldn't mind if they moved a little further away.

My life feels like it's entering a new phase. I always thought I might go back to writing once I had more time on my hands, but I think the world already has too many voices and not enough listeners.

That leaves me at a bit of a loss as to what to do next. It's actually a new sensation for me. I always have something more to do, and now my list has grown smaller and more introspective.

I don't mind doing more for myself. It seems I've been doing for others long enough. I'd like to have some fun before exiting the stage.

What are your plans for 2022? Do you see yourself doing anything different next year?

Angela Brown said…
While I am sad to hear you had to let the goats go, it sounds like the girls went to someone who will take good care of them and the buck turned into a lesson and a blessing for a family member. Not a bad legacy, actually.

You have some beautiful land so I hope you are able to enjoy it in all the ways that gives you joy, perhaps bunches of gorgeous flowers to attract butterflies?
October 25, 2021 at 8:22 AM

Maria Zannini said…
Angela: I'll think of something even if I let it go back to forest.

I still think about those goats. I've talked to this man on several occasions. He and his wife seem like good people.
October 25, 2021 at 9:25 AM

Mike Keyton said…
It’s hard letting go, but wise knowing when to. I hope looking after yourself includes travel in the future
October 25, 2021 at 3:16 PM

Jenny Schwartz said…
I'm so glad your goats went to someone you know and respect. One less worry.

Having time/energy/and in your case, land, suddenly available is daunting when we've spent years never having quite enough. The weird (reassuring?) thing is that someone/something always claims it :) Happy adventures with whatever opportunity is coming your way!
October 25, 2021 at 5:16 PM

Lynn said…
I'm glad you've made such a tough decision. It's sad, but it also creates new opportunities. I like the ideas you have for making habitats. The bats in particular are really important.

I'm trying to do a lot of things differently this year, and I hope I continue that effort in 2022. That said, I'm not planning (or counting on) the future anymore than I have to. Working, cooking, taking care of the pets, family and house are enough to deal with on a daily basis. Living in the moment is tough for me, but I'm learning to let go of things.

I'd like to do one thing for myself: design and make myself some clothes. I used to sew dresses and pants from patterns when I was younger, and I know just enough about garment construction and pattern making to manage it (I think.) I'd really just like to try. I want certain things to wear that fit me instead of a size chart in the fabrics and colors I prefer.
October 25, 2021 at 5:53 PM

Maria Zannini said…
Mike: I know it's the right decision but it still makes me sad. The dogs are still a problem for traveling, but at least they're better behaved with each other. Hopefully things will continue to improve.
October 25, 2021 at 8:30 PM

Maria Zannini said…
Jenny: The one nice thing I love about owning land is that I don't have neighbors on top of me. I've never been fond of suburban living.
October 25, 2021 at 8:32 PM

Maria Zannini said…
Lynn: How cool is that to make your own clothes?! I attempted it once many years ago and decided then that the needle arts were not for me. Too stressful. LOL!

I did manage to make a good fitting shirt for Greg, but I never again picked up a needle and thread unless it was for repairs.