Retire Without Living On Cat Food 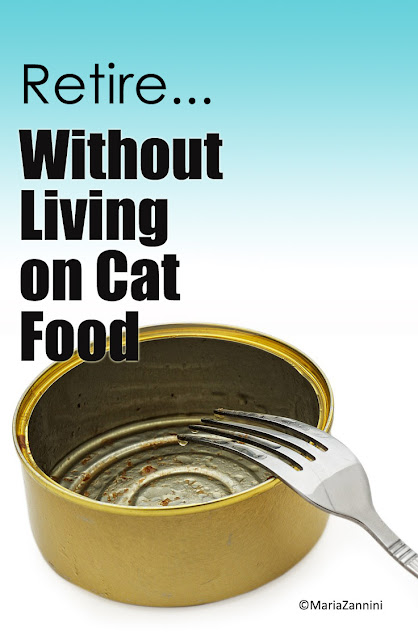 We retired relatively early, but like a lot of people we didn't think about retirement until it was almost too late.

In the back of my mind I thought Greg and I would work until old age, compensating with whatever savings and Social Security we had accumulated.

Au contraire. That is not the way to plan a retirement.

Savings and investments are the key. If you don't have a trusted financial consultant, get that first.

We found ours through a friend's recommendation. Even though the consultant's office is many zip codes away, we still see him faithfully once a year for a review. He is thorough, and thankfully, plain speaking. If there's something we don't understand, he patiently explains it until we do. (I wish all people were that patient.)

When we engaged him we had a pitifully small amount for retirement, but he advised us wisely with the right investments until we had a nest egg we felt was comfortable for the foreseeable future.

Secondly, we started saving like crazy. We lived way, way below our means. Yes, it nagged our egos to see our friends buy expensive homes and go on exotic vacations, but we stayed the course, living frugally until it became second nature.

Thirdly, Greg and I both put every dollar we were allowed to contribute to our 401K. I think it's changed now, but back when we were working our companies paid 6% of our salary, dollar for dollar. It didn't take long for those savings to add up.

Note: Investments are always risks and you're at the mercy of the market. In 2008 we lost a huge amount of our 401K savings. It took us four years to recoup that loss. That was four years longer before we could retire.

Lastly, make DIY part of your suit of armor. Greg repairs our appliances, cars, and equipment and that saves us a lot of money. Now if I hadn't had Greg I would've been watching a dozen videos on YouTube to get the job done.

The only thing I will not tackle is electrical work. Oddly enough, it's the one job Greg loves doing. Had his career not taken him into the chemical industry, he would've become an electrician.

The thing about retirement savings is that you have to plan decades before the actual event. If you're smart, you start early. And P.S., it's never too early to start.

It's all about taking the long road and keeping your eyes on the prize. One of my happiest days was knowing I'd never have to go into that office again. It was worth every vacation and every fancy car we didn't buy. I mean that. The stress you let go is priceless.

Unless you're independently wealthy or expecting a windfall, slow and steady is the only way to reach retirement comfortably.

The only one who eats cat food in our house is the cat.

For the record, we probably still frittered away more money than we should have on useless things, but it all worked out in the end anyway.

Two personal asides from the past week:

Sunday, Greg and I celebrated our 46th anniversary! That number still seems unreal.

Last week, I sold our two Nubian does. I'm still sad about that. I know it was the right thing to do, but I miss them terribly. The buck will go in the freezer. Greg isn't keen about having to butcher him, but it'll be the last time doing such a large animal.

Mike Keyton said…
A belated happy anniversary, both! And what you say about that first day of retirement is true. A priceless moment. Ref cat food, some of the commercials for the gourmet versions look quite appetising- or maybe I’m easily pleased
October 11, 2021 at 7:20 AM

re: retirement
It is priceless. Time is precious and no one knows that better than an old person. LOL!

Thank you for the great advice. Seems a lot of companies are moving away from that 6% dollar for dollar match for 401k, and a few I saw offer a 401k plan with no matching, but it is good to think about retiring earlier.

It can be a bit difficult when kiddos are involved, especially if preparing for college and even moreso for those with more than one child. But it is possible.
October 11, 2021 at 8:39 AM

Stacy McKitrick said…
Happy Anniversary!
Thankfully, we should be all set once Hubby retires. If he retires. His boss still won't hear of it and since Hubby loves his job, he's in no hurry (especially since he can work from home now and when we do travel, he can work from the road if need be.).
October 11, 2021 at 9:02 AM

Maria Zannini said…
Angela: Kids add a whole other dimension to the equation.

Dru Ann said…
When I first had my 401k, I did the same thing, making sure I gave at least the matching part. As I was approaching my retirement age (2-3 years from now), I put more than necessary to increase my pot. I actually give too much that in December they give me back my contribution.
October 11, 2021 at 3:38 PM

Maria Zannini said…
Dru: Both our companies were pretty strict about how much we could put in. When you were maxed, you were maxed.

Like you when we got within a few years of retiring we put everything extra into CDs, money market accounts, and IRAs--any place where we couldn't touch the money for a few years.