Should You Tackle a Bathroom DIY 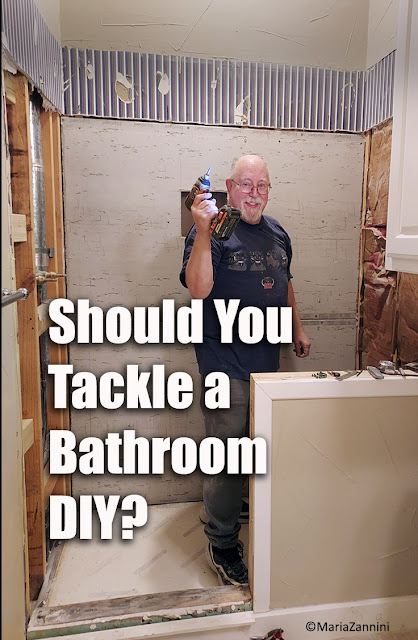 We have been tackling a bathroom remodel since January. It started with replacing the tile floor--which turned out great. The next job was replacing the shower door and a glass half wall which we intended to farm out to professionals.

It took weeks to get estimates from all the companies I contacted--even when I prodded them for an answer. In the end, we chose someone who was the only one to warn us that the new rimless shower door will not look good against the cultured marble surround because once the old door was removed it'll leave a stain everywhere the frame touched it.

When Greg removed the door and frame, the fake marble looked aged. He offered to retile the shower and while he had it gutted he could install new fixtures, an inset shelf and a grab bar.

Mama didn't raise no fool so I jumped at the offer. It was a good thing too.

Unbeknownst to us, once he tore it down to the studs we discovered significant water damage along the threshold and built-in bench. It was only a matter of time before it rotted. We found it just in time.

On to choosing tile and trim. This too took weeks. We remodeled another bathroom in another house about fifteen years ago. The difference between then and now was choice--or lack of them. Most of the tile options today are way too similar to one another. I wanted Roman spa-elegance but most of the tile available was more trendy than timeless.

We finally settled on a ceramic tile that looked like marble with brown veining. For trim we went with an old favorite, travertine with a stone flower motif to finish off the top.

While we were settling on tile, I started researching plumbing trim. You would not believe how expensive those things are now! All told I spent $400 on two trim valves, a diverter, a control valve and a handheld sprayer. I got them at Amazon because the same parts were going for 50% to 75% more at the brick and mortar stores. Same brand. (I chose Pfister.)

The only thing I didn't buy new was the overhead shower head. I loved the old one too much. It puts out a wonderful stream of water. When guests come to stay, they fight over that shower. It's that good.

Because of the water damage Greg replaced the sheetrock with cement board. Since I had chosen a single valve (as opposed to the traditional two faucets) and added another valve for the hand sprayer, he needed to redo the plumbing. Simple job, right? Wrong.

We went to dozens of stores several times trying to locate every elbow, joint and coupling. It was ridiculous. The same thing happened with the tile. We drove hours to several different cities to locate the stone trim in the quantities we needed.

And no one at any of these stores was helpful, save for one young man. Thank you, Jonathon at Home & Decor.

I never had to work so hard simply to find parts.

So should you tackle a bathroom remodel or hand it over to professionals?

If it weren't for Greg I'd have no choice but to call a professional. It got complicated very quickly and it was only his expertise that saved us from spending thousands more.

On my own, I might've done the tiling myself, or even changed the faucets, but when it comes to gutting a shower and redesigning the plumbing, that's beyond my capacity, even after watching Greg do it. There are just some things best left to the experts.

We've remodeled countless rooms over the years, but I think this bathroom had to be the hardest. Thank the pandemic for making parts hard to find and creating an apathetic work force. One is bad enough but both made this project incredibly stressful.

I'll do another post once this job is done.

So what have I learned so far?

I learned that things are far more expensive than normal. I also learned that supply is stretched far and wide. Expect a lot of travel time to locate each item.

Since this is possibly our last house, I didn't skimp on quality. If I liked a particular style I bought it. I didn't settle for what was cheaper.

I do suggest price comparisons, but Amazon was far and away better priced for fixtures and such. Even though it was pricier than I remembered from last time, I was very pleased with every Pfister product I purchased.

What's the hardest remodeling job you've ever done on your home? Did you ever start a DIY project and have it turn into a bigger job than you expected?

nightsmusic said…
We've remodeled kitchens and bathrooms many times. We knew better when we redid our master bath in 2017. We live in a modular home. Not a mobile home, but a modular one. It's built in a factory, yes. Each room is built, shipped and then put together like Legos. The plumbing, wiring, most of the cabinets, door frames, et al, are already in place when the boxes come. The walls are all six inches instead of four. This poses some unique problems if one decides to move plumbing or fixtures or the floor plan, all of which we needed to do since whoever designed the floor plan must have been three years of age.

I won't tell you what it cost. The majority of the cost was in the granite walls in the shower and in the flooring throughout, but it was worth every penny because I would have died of a mother of all migraines had we tried to do it ourselves. There is so much truth in that old saying... 'man's got to know his limitations'...
February 28, 2022 at 4:23 PM

Maria Zannini said…
nightmusic: I've heard of houses like that. I never knew anyone who had one. That's kind of neat.

We've never had a house built. After hearing the horror stories from several friends, I'm not sure I can handle the stress. I'm pretty sure if the contractor didn't do the job according to my specs, it would come to blows. LOL.

We did granite for the shower bench--which remarkably came out cheaper than buying the prefabricated faux marble shower bench that big box stores sell. The granite bench will come already cut to size, buffed and with the bull-nosed edge we wanted.

nightsmusic said…
I absolutely love my granite bathroom. It is black though so it's a bit more work to keep clean, but I'm okay with that.

The floor and walls are the exact same granite but the walls are a high polish and the floors are high heat fired. They're textured so we're not sliding on our rears if they're wet. I'm really happy with the way it all turned out. We could never have done that ourselves though.

We did build our house prior to this one. I was there every day though pounding nails and helping with the build. The contractor was great, so I ended up pretty much with everything I wanted done and understood when there were things that needed to be changed because it just wasn't possible. I loved that house. I mourn that house. But things changed and we had to move on.
March 1, 2022 at 4:57 AM

Maria Zannini said…
Mike: I wasn't born in a DIY family, but I married into one. At least over the years, he's given me confidence to tackle things I wouldn't have had I been left where I was.
March 6, 2022 at 11:08 AM